Student veterans find strength, support as they head to college 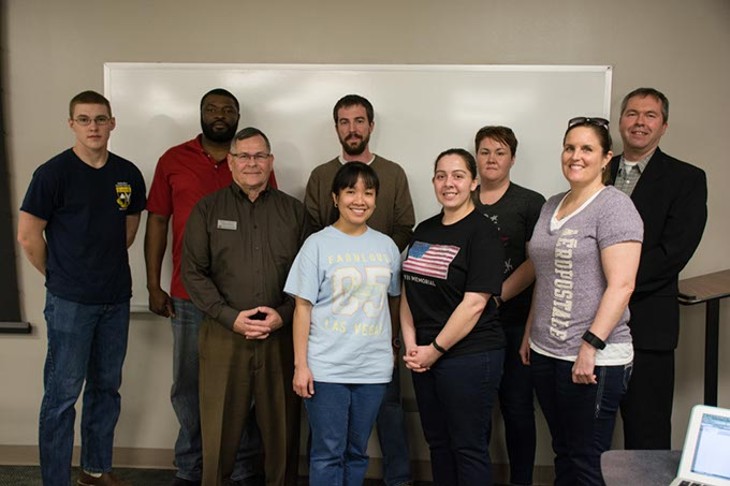 For the more than 1 million veterans who returned to civilian life and pursued higher education since 2008, the organization has been a godsend.

“When you first get out of the military, you feel a sense of loss. There exists in the military a brotherhood that bonds us all together, and when you leave that, there is an emptiness left,” Noe said. “Many veterans will adjust and make friends and become involved, but there is still a hole there that needs to be filled. My hope for this organization is to bring veterans — both students and faculty — together to help ease the burden of having to fit into civilian student life.”

“I suffered a traumatic brain injury and a few other minor injuries. I have had to deal with my brain not functioning correctly at times. I struggle a lot more than I used to struggle in order to complete some tasks,” Noe said. “It makes studying and getting schoolwork finished difficult, but I do it.”

Priscilla Marquez Cisneros, 25, also an OC political science major, joined the delayed entry program in 2009 when she was 17 and shipped off to boot camp.

After that, she attended Marine Combat Training and then graduated second in her class from job school. She was stationed at Cherry Point, and later Camp Lejeune, in North Carolina.

She met her husband in her unit and married in 2012. Her active duty contract ended in 2013.

“He’s from Oklahoma City, which brought me here,” Cisneros said.

Both women are determined to earn college degrees, speak about the challenges they face as veterans and underscore the importance of establishing their school’s recently established chapter of Student Veterans of America.

The OC group is the first in Oklahoma City.

Cisneros and Noe want student veterans to feel as comfortable as possible while getting the hang of their academic tour of duty and head off more serious issues if they can.

Noe said she will hold a leadership role in the chapter and will be on the president’s board as an adviser once officers are elected.

“We will be involved in helping elderly veterans and their spouses, as well as some widowed veteran spouses, around town,” Noe said. “I really want to shine a spotlight on veteran suicides. The rate is too high, and something needs to be done to stop it.”

“They may be older than their classmates by four, six, 10 or 20 years, having given multiple years to serving our country. More than half of them are married. Half have children and are dealing with things like paying bills [and] maintaining their families, and that’s not even getting into issues they may be dealing with as a result of their service,” he said. “That’s very different from their classmates, whose biggest focus and challenge is just being a college student with none of those other things in play.”

Tillman began his involvement with SVA as a student and knows the value of that community firsthand.

“We’re about the individual student vet who is unsure. They get to campus, they’re taking a few classes, but they feel lost. They feel like they just don’t belong,” Tillman said. “Student Veterans of America is a safe place for that individual, a place where he or she can feel comfortable and feel like they belong. Then they can reach their academic dreams.”

After serving six years in the Army National Guard, including a 2008-’09 deployment in Iraq, Tillman enrolled at Arizona State University and earned a political science degree.

“The flipside of those challenges is the amazing attributes student veterans bring to their universities as a result of having served in the military,” Tillman said, “things like discipline, tenacity, leadership and the ability to place the mission before the individual.”

Noe and Cisneros have worked hard to feel comfortable in their new setting.

“When I first came to OC, I was still very much in military mode. I would go to class and go home immediately after. I felt disconnected to the people here and campus,” Cisneros said. “I think getting involved could pose an obstacle because veterans like me can’t really relate to others. I’ve gotten better and I’ve also made friends who are veterans and who are not veterans. It takes time, and I think the OC [Student Veterans of America] chapter will ease the transition and speed it up.”

Noe explained it in a different way.

“When you first get out of the military, you feel a sense of loss,” she said. “There exists in the military a brotherhood that bonds us all together and when you leave that, there is an emptiness left. Many veterans will adjust and make friends and become involved, but there is still a hole there that needs to be filled. My hope for this organization is to bring veterans — both students and faculty — together to help ease the burden of having to fit into civilian student life.”

Print Headline: Military, might, Student veterans find strength and support in numbers as they return home and head to college.