Yes, it’s called martial arts, but students don’t often have the opportunity to get a fine arts credit for taking karate. However, Harding Fine Arts Academy in Oklahoma City lets its students do just that.

Jennifer Allman, a photography teacher at the time, filled that gap by putting together a martial arts exhibition with family members. The interest her performance generated prompted the school to offer karate as a class.

Allman, a black belt in karate, started martial arts at a young age. She said her father was largely responsible for her training.

“I started learning karate when I was old enough to walk without falling on my face,” Allman said. “I took a break when I was a teenager, when it wasn’t ‘cool’ to do martial arts with your dad.”

A few years later, after she got married, her husband expressed interest in learning the skill. About the time he earned his black belt, Allman’s interest resurfaced.

Soon, she made the transition from practicing martial arts to teaching it at a high school. 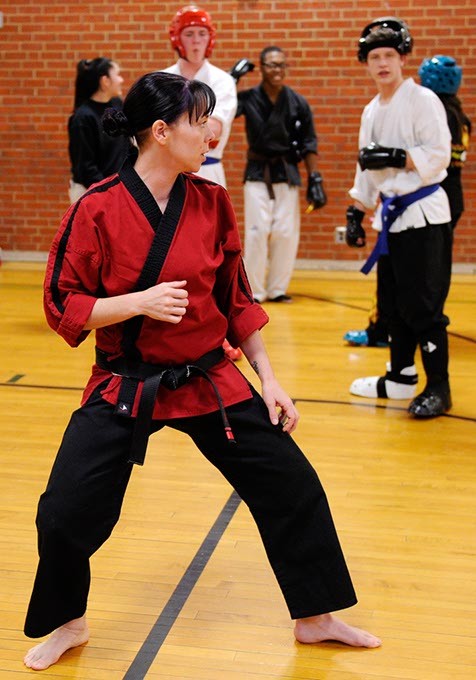 “In a traditional setting, sparring is a huge part of [karate],” Allman said. “In a high school setting … I get lots of students that, after a year, become more comfortable and let me know that they’re willing to try sparring.”

Teaching karate in a school setting has its advantages. While most classes meet once a week, Allman gets to spend five days a week with students. She said this extra time gives her students an edge at tournaments.

Because Harding’s high school team is unique — no other area school offers credited martial arts class — her pupils compete against private clubs and academies in statewide tournaments. All the practice paid off when, in her team’s first year of competing, they came home with 50 first-place trophies. The next year, they brought home 70.

Teaching has helped the instructor grow as well.

“Students will ask you why and how — they’ll ask you to explain,” Allman said. “It’s forced me to stop and think about why I do things certain ways.”

There also are real-life results from Allman’s class. A student credits her for saving his life over winter break. The student was attacked with a knife and stabbed in the back of the neck and defended himself because Allman ran class drills with rubber knives.

Nieko Ligons, a Harding senior, has been in Allman’s program since his freshman year. He is a first-degree brown belt and is preparing to test for his black belt in May. 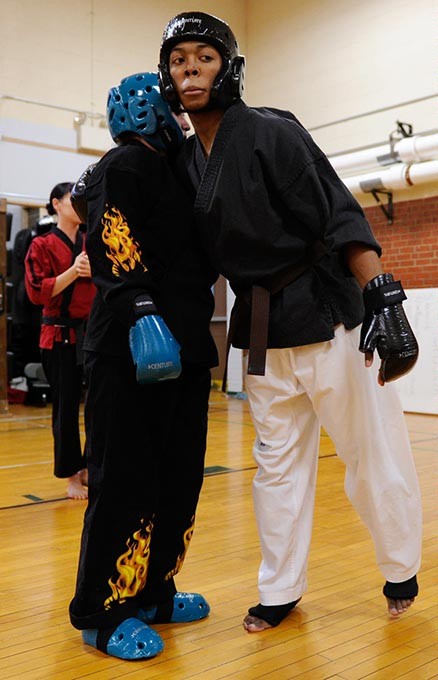 “I really like the philosophy behind it,” Ligons said. “It’s taught me discipline. I don’t normally like being told what to do, but karate has made me more humble.”

Students at Harding join for a variety of reasons. Many, like Ligons and sophomore blue belt Sierra Wilkinson, have martial arts experience. Other students, like Mireya Sanchez, have other motivations.

“I decided to take karate because I’d just gotten braces and my mom wouldn’t let me do boxing,” Sanchez said.

Whatever the reasons, most find karate is not like other forms of martial arts.

“I thought we were just going to brawl,” Wilkinson said. “When I saw all the choreographed movements we had to do, I thought, ‘I could’ve taken ballet for this.’ But then I saw that there was a lot more to it.”

The choreography is part of a kata (Japanese for “form”), or training exercises to hone technique.

Allman’s students said there are emotional and mental benefits from kata work.

Learning karate helped Wilkinson control her emotions and taught her to focus. It also helped her build relationships.

“I got to make more friends,” Wilkinson said.

Allman hopes her students walk away from the program feeling confident and inspired.

“I want them to know that they can do or be anything they want and no one else can determine that,” she said.