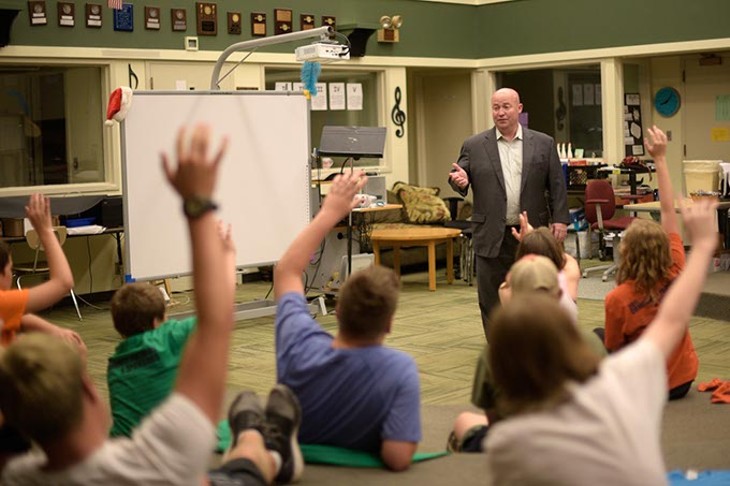 Earlier this year, a south central Oklahoma third-grader told a classmate they would bring a knife to school to kill them.

Long-term suspension was not the appropriate answer for the child, insisted Joe Dorman, the former state representative who now serves as chief executive officer of Oklahoma Institute for Child Advocacy (OICA).

Research supports that disciplinary problems are often not the result of bad behavior; instead, bad behavior is deeply rooted in toxic stress. A swelling number of Oklahoma children and teenagers are experiencing traumatic events like abuse and neglect and witnessing behaviors like crime, parental conflict, mental illness and substance abuse, and Dorman argued the best way to remediate their harmful effects is to build and foster resilience in youth.

“We need to find out what issues are creating the problems,” Dorman said. “We need to get kids the help they need rather than kicking them to the curb.”

Adverse childhood experiences (ACEs), which include those traumatic childhood events, can create dangerous levels of stress and impact brain development, resulting in effects on learning, behavior and health. According to research performed two decades ago at the Centers for Disease Control and Prevention and Kaiser Permanente Medical Care Program, 10 types of childhood trauma are linked to the adult onset of chronic disease, mental illness, violence and becoming a victim of violence.

Youth who experience two or more types of childhood adversity are more likely to see their physical and mental health affected as they age, according to the research.

In the report, Oklahoma ranked No. 1 in the categories of children witnessing domestic violence and experiencing parental divorce. Oklahoma came in No. 2 in the areas of parents who have abused drugs and children who are victims of violence or had witnessed neighborhood violence.

“The fact that we rank highest in the rate of children who have experienced four or more ACE experiences speaks volumes,” Dorman said.

His nonprofit organization, along with Potts Family Foundation, have partnered with Rep. Pat Ownbey, R-Ardmore, to bring a slate of presenters on ACEs and their impacts on Oklahomans to the Capitol for an interim study. Now is the time for residents to push for policies and practices in state services that allay and prevent future dysfunction ranging from chronic health issues to early death.

“We are not going to turn the corner until we overcome these generational issues, break the cycles and help kids avoid the mistakes of their parents and grandparents,” Dorman said.

Students facing significant trauma were not difficult for educator John Thompson to spot during his 18 years teaching in urban Oklahoma City classrooms.

High schoolers with trauma, which varied from students experiencing the death of a loved one to witnessing family members struggle with substance abuse and mental illness, were constantly on edge from their unstable home environments, placing their brains in a state of constant high alert. After several hours at school, even a simple interaction from a teacher or a peer could trigger rage, expletives and other inappropriate behavior, Thompson explained.

He responded to a student exhibiting dysfunctional behavior with a hug and conversation, a straightforward technique to help the student calm down. It had an outsized impact.

“There is really only one way you learn about what your kids have experienced in terms of the severe trauma and their mental illness, and that’s to develop relationships,” said Thompson, who entered the teaching profession in the 1990s, when education leaders advocated that better instruction led to fewer classroom behavior problems. “All this talk about instruction and test scores, that’s just a distraction from what we really need to do. The intellect and academics are important. Teaching is fundamentally an act of love. The answer to the stress created by trauma is a loving adult. By building trusting relationships, we can work together and build resilience.”

Thompson, who writes about education issues in Oklahoma and across the nation, supports school-based mental health services and staff development that employs trauma-based approaches.

Steve Buck, Oklahoma’s Office of Juvenile Affairs (OJA) executive director, doesn’t tolerate staff flipping through a teenager’s file followed by a headshake and comments like, “Not much hope for this one.”

“Their experiences shape who they are,” Buck said. “Just as they shape their difficulties, they can also shape the brilliance of their recovery.”

That tells OJA staff that youths who enter the care of OJA don’t come in with just offenses. Buck said that the majority of the youth are raised in cycles of generational poverty, which include time spent in the child welfare system, mental illness and substance abuse issues, academic disruption and having a parent incarcerated.

A successful juvenile justice program not only helps youth get back on their feet once they leave the state’s care but can help decrease recidivism. The agency has an established program that includes mental health intervention as well as educational and career advancement, health and wellness classes and pushing healthy relationships with caring adults, which Buck believes is one of the top ways to help a child build resilience.

Research also suggests that just one caring, safe relationship can be the key to giving a child or a teenager a better chance at a healthy future. Everyone deserves a second chance, Buck said.

“The prevalence of ACEs in a child should not be a reflection of the lack of potential in that child,” Buck said. “Presences of ACEs in a child should be an invitation to us adults to help that young person find ways to succeed in extraordinary ways. … It is important that we as a state understand this. We, as a community, do what we can to help young people who have experienced ACES recover and all that we can to minimize the number of ACEs on future generations.”