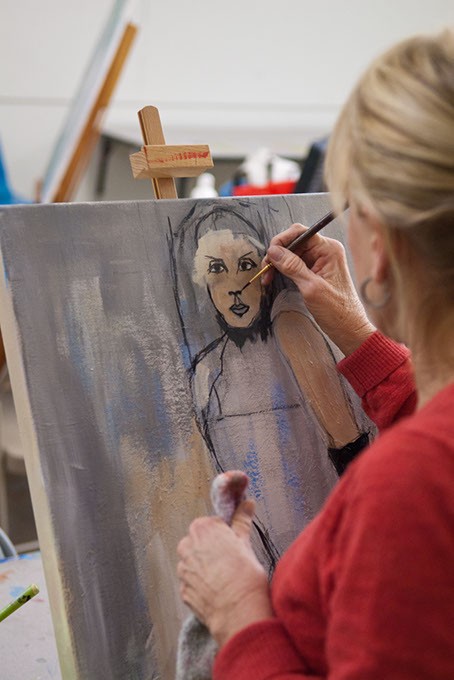 In August, when the National Endowment for the Arts released its annual Arts Basic Survey, Colorado media congratulated its readers and viewers for being the nation’s most voracious consumers of visual and performing arts.

That includes seeing films, going to art galleries, watching plays or dance performances, listening to music and reading books. To top it off, nearly 65 percent of Centennial State residents created their own art from 2012 to 2015, the years the survey tracked, so not only do Coloradans love art, they love it enough to make it themselves.

Other than close runner-up Vermont, most other states came off like the kid who forgot to draw the family portrait for Parents’ Day.

In Oklahoma, Colorado’s neighbor, only 31 percent of residents created their own art, and consumption pales in comparison to most of its bordering states. About 38 percent of Oklahomans read literature, and 46 percent used electronic media to experience music or arts performances.

The NEA’s consumption statistics stand in sharp contrast to the vast array of arts organizations and artists creating entertainment opportunities for Oklahomans.

On June 30, Allied Arts closed out its annual fundraising campaign having raised almost $3 million for arts in central Oklahoma, which brought the total raised over the organization’s 45-year history to $60 million. Oklahoma is home to world-class art museums, popular street festivals, arts districts and the No. 12 highest-ranked music venue in the United States, Tulsa’s BOK Center, according to Pollstar industry rankings.

This year, thousands queued up at the Oklahoma City Museum of Art to see the works collected in Matisse in His Time: Masterworks of Modernism from the Centre Pompidou, Paris, and thousands more will crowd into the BOK Center Jan. 14 for the Red Hot Chili Peppers concert.

But while Allied Arts reports that arts and culture deliver a $314 million annual economic impact on the state, on most days, the majority of Oklahomans are staying home to watch the game.

“This is a challenge for us, and it’s not the best news to receive,” said Jeremiah Matthew Davis, artistic director at Oklahoma Contemporary Arts Center. “But if you begin to look at participation by county, activities in the major urban areas of Oklahoma, the numbers are quite different.”

Davis, whose organization broke ground on a new facility at NW 11th Street and Broadway Avenue in September, said that Oklahoma, Tulsa and Cleveland counties consume arts at high levels.

Oklahoma Contemporary recently commissioned a study indicating that attitudes toward contemporary or modern art had swung to a high positive in Oklahoma compared to findings in 2011.

Some of that shift comes from demographic changes.

With more people and businesses relocating to Oklahoma and younger people beginning to participate in the economy, some sectors of the arts that might not have found favor in Oklahoma are building audiences.

While the NEA study has the unfortunate effect of painting the state with a broad brush, it ignores success stories of the past year like the Matisse exhibit.

“This past summer, OKCMOA saw unprecedented numbers for Matisse in His Time: Masterworks of Modernism from the Centre Pompidou, Paris,” said Becky Weintz, museum director of marketing and communications. “With over 62,000 visitors during this exhibition, we expect this year’s attendance numbers to be higher than last year. We’re looking forward to continuing to offer exciting exhibitions that bring new visitors to the museum and keep our regular visitors coming back again and again.”

An event like the Matisse exhibit, which was the only North American stop for that collection, expands the audience for arts in general.

Davis said that simple exposure to the arts can move the needle significantly.

“It’s demystifying what art is,” he said. “Once they realize that it can speak to them, that it can be interesting and fun, that it’s not going to offend their values, people really do change their minds.”

But again, the challenge comes outside of the high population centers. Davis, who grew up in Osage County, said that the impact of arts in the tallgrass or in the lightly populated areas of the panhandle is a continuing issue.

Education plays a significant role in broadening the appeal of art, which means more outreach — something Davis said helped grow the audience in Oklahoma City.

“Some of what we’re concerned with are people who say that arts are for kids,” he said. “They say, ‘Arts are great, but when you become an adult, you put away childish things,’ which includes art. But what we’ve found with our adult education initiatives is that our exhibitions and classes really change people’s lives for the better. They realize after they participate in making something, in creating something and engaging creatively with art, their entire perspectives can be changed and their lives can be shifted for the better.”

But the last thing you want to do is give Oklahoma a complex about it.

Arts should not be treated like forcing someone to eat their vegetables. Instead, people should think of it as the dessert.

“It’s being friendly about it — it’s not about scolding people for not liking art,” Davis said. “It’s about spreading the gospel that it’s fun. It’s OK to challenge people’s thinking, but you’ve got to invite them first.”

Print headline: Art starved, A National Endowment for the Arts report shows low art consumption in Oklahoma, but the problem rests with the rural-urban divide.