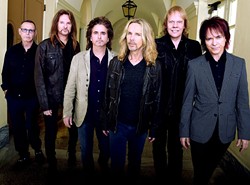 Styx’s seventh studio album is a classic. With songs like “Come Sail Away” and “Fooling Yourself (The Angry Young Man),” The Grand Illusion was famously released on July 7, 1977 — or 7/7/77. With that bit of numerical trivia in mind, it is logical to conclude that the band’s St. Patrick’s Day show 8 p.m. Friday (3/17/17) at Norman’s Riverwind Casino, 1544 State Highway 9, will be one of the luckiest nights local classic rock fans could ever hope to experience.

Expect an emphatic holiday performance from the Chicago-formed band considered by many as an institution of progressive rock music. Keyboardist and vocalist Lawrence Gowan, who joined Styx in 1999 after the departure of founding member Dennis DeYoung, said he will do his best to make Shamrock Day a craic.

Gowan, who recently spoke with Oklahoma Gazette via phone, said he is the product of a very mixed national heritage. The Toronto-raised musician speaks with a distinctly Canadian accent despite performing in one of America’s greatest hitmakers. Gowan was born in Scotland to a Catholic, Northern Irish father who served in the British Royal Navy. In the Gowan household, St. Patrick’s Day carried more significance than an excuse to wear green.

“I have to observe it in some way,” the musician said.

The show marks the third time for Styx to play an Oklahoma show in two months. The band has a blockbuster tour with REO Speedwagon and The Eagles’ Don Felder set for the summer, so Gowan said Styx is providing fans outside the markets scheduled for those shows a special, extended set. As one might expect, audiences feature plenty of longtime fans pining to hear nostalgic songs of their youth. Styx — like many other still-touring classic rock bands — also has added a fresh following of millennials in the last decade.

“A lot of the time now, I’d say a little more than half the crowd is under 30 years of age and weren’t even born when some of the biggest Styx records were produced,” Gowan said. “They seem to have as much enthusiasm for the music as people who were there all along.”

In Styx’s case, the youth surge could be explained by a combination of factors. Perhaps most significantly, YouTube and streaming music expose younger fans to music that predates them. With a few clicks, fans of all ages can access almost any band’s catalogue.

“That’s not how the music industry was in the past,” Gowan said.

All the band’s current members deliver an amazing rock performance, though only vocalist/guitarist James “J.Y.” Young and bassist Chuck Panozzo remain as original members in Styx’s cast of six. Some fans might not be open to seeing a mostly newer lineup, but this is the only roster some have ever had a chance to see.

“The cool thing for us is that at some point, they hear something and connect to it enough to go, ‘Oh my God! They’re coming to town; I want to see this show,’” he said. “That’s the one thing they cannot download.”

Gowan, who won and was nominated for several Junos (the Canadian Grammys) as a solo artist before joining Styx, said concert guests will experience a top-level rock performance.

“There’s just something magical about a live rock show,” he said.