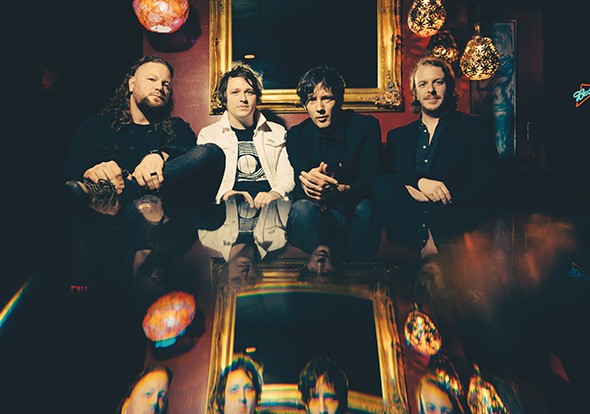 The Boston Globe warned that the HBO documentary Heroin: Cape Cod, USA “will break your heart,” but Echo & The Bunnymen frontman Ian McCulloch must have liked the soundtrack. Hearing “The Greatest Thing” by Tulsa’s Ester Drang in the 2015 film inspired McCullough to get the band as the Bunnymen’s opening act for several dates on its 2016-2017 North American tour.

“I guess he was just watching that one night,” said Ester Drang frontman Bryce Chambers, “and for some reason, he just latched onto that song. He was like, ‘Bryce, I had to rewind and listen to that again.’ … Their tour manager emailed us and I thought it was a joke at first because it’s not usually how things work. The email was just like, ‘Hey, this is so-and-so. I noticed you were fans of The Bunnymen. Would you be interested in playing some shows?’ That was all it said. … We wound up doing, like, 20 shows with them.”

Ester Drang plays Aug. 2 at 51st Street Speakeasy, 1114 NW 51st St. with Lord Buffalo and Applied Music Program. Formed in Broken Arrow in 1995 and essentially dissolved after its 2006 album Rocinate, Ester Drang had only recently reformed when Chambers got the email. Other than the offer itself, Chambers said the most unexpected part of touring with The Bunnymen was how considerate the band is.

“I was surprised at how nice most of those guys are because you expect them to be kind of pissed off at the world or something,” Chambers said. “They’ve been doing it so long, you feel like they’d be like, Oh, no, it’s another band. Screw these guys. … I’d think they’re probably kind of frustrated that they’re not at the level of U2 or something, but they’ve had a great experience with music in their lives to be able to keep that kind of cult following for like, 25, 30 years.”

Though he wishes the opportunity had come about 15 years earlier, Chambers said touring with The Bunnymen was a helpful reminder to “not feel like you’re too old or something to be trying to play music.”

Ester Drang’s EP The Appearances, released last year on Oklahoma City record label Clerestory AV, collected songs recorded after Rocinate. NPR called The Appearances “velvet-draped space rock” with “threads finer than silk.” Chambers said he initially intended the songs — some of which were recorded about seven years before the release and feature contributions from Broncho drummer Nathan Price and Ester Drang’s original drummer James McAlister, who has since gone on to work with The National and Sufjan Stevens  — to be demos.

“Some of them were pretty old, and they were just kind of like demos that I was trying to hopefully go to probably a better studio [to record them] in my mind, but I think I was kind of liking this oversaturated sound, what it ended up being just through the demos,” Chambers said. “‘Might as well leave it the way it is if you like this dirty sound you’re getting.’ … It’s pretty murky-sounding, which is kind of nice to do for a change because I feel like the last Ester Drang record was a lot more polished.”

NPR reviewer Lars Gotrich wrote, “Chambers’ smoky croon fills the air like a lonesome cowboy sailing across a starry abyss — cloaked in reverb, you have no what idea what he’s singing, but reckon it’s something about the expanding prairie we call the universe.”

Chambers said his vocals are lower in the mix because he likes playing keyboard and guitar more than he does singing.

“I’ve always just written the music first and then tried to come up with vocals over the top of it,” Chambers said. “A lot of people do it the other way … but I’ve always just loved the music more than actually coming up with lyrics, which is probably not a good thing, you know?” 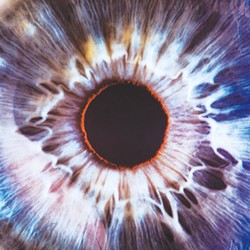 He basically became the singer out of necessity.

“A long time ago, we tried to have a couple of other singers, and they were not particularly that great for the style we were trying to go for,” Chambers said. “I kind of just got stuck doing it because it was just a small group of friends, and nobody could really play their instruments and sing at the same time when we were younger. … I don’t mind it, but I never really wanted to be, like, the frontman per se.”

The Philip Glass-influenced single “Mindlessly,” recorded at OKC’s Stowaway Recording, was released in April as one side of a 7-inch vinyl split with Clerestory label mates Lord Buffalo. Chambers said working on the song gave him a “little push” to get back to making music after his brother died last year.

“I was just kind of not really focused on trying to do any sort of music,” Chambers said. “We’ve only played, like, one show until now in the past year. … Everybody’s got to go through that at some point in their life, but it was a little strange. But I’d already recorded a lot of things … so it was pretty smooth going, even though I was kind of out of my mind.”

In addition to the Speakeasy show, Ester Drang is playing in Austin and Tulsa. Chambers said he hopes the band — which now includes guitarist and keyboardist Tommy McKenzie, cellist Jon Paul Pope, drummer Hank Hanewinkel III and founding bassist Kyle Winner — will begin to get the hang of playing live shows again. Chambers is currently considering a larger tour and planning to record new music, but some aspects of being in a band are getting more difficult with age. Though the band has toured with headliners such as The American Analog Set, The Get Up Kids and Pedro the Lion in addition to The Bunnymen, Ester Drang is still in search of bigger following.

“Sadly, we’re still kind of like an opening act,” Chambers said. “If we were going around doing a nationwide tour, it would just be smaller, like, Speakeasy-type places. I don’t know if you’ve ever played Omaha, Nebraska, before, but it’s pretty rough. … I think you’re always excited about hearing new material or something that you’re working on … but as far as like traveling around and not getting any sleep, you probably kind of lose passion for that.”