Suicide rates in Oklahoma are on the rise 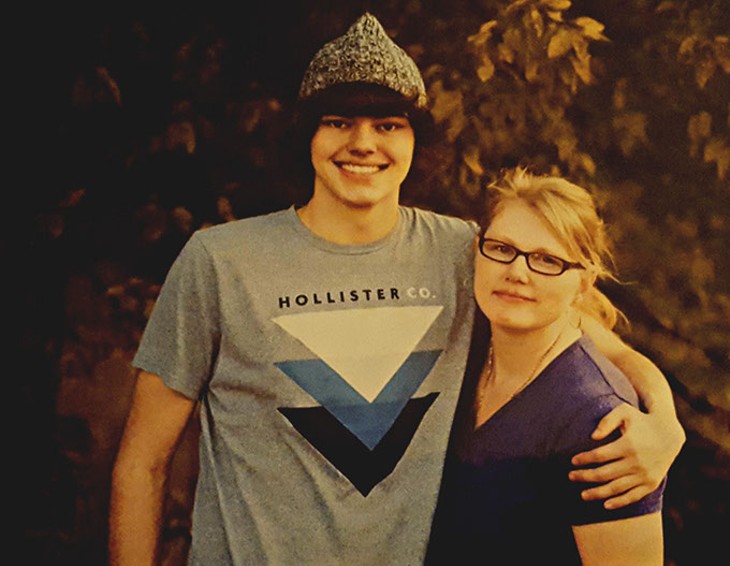 Gwen Evans described her son Nathan as a happy child, always smiling and an ideal Christian because he never judged anyone. The call she received Sept. 10, 2015, shocked her.

A mom of a girl Nathan knew asked Evans if she was in front of him. As she was at the local library with her husband for a meeting, she told her, “No. I’m about three miles away.” The voice on the other end told Evans that 18-year-old Nathan had a gun and wanted to kill himself.

Evans remembers frantically rushing home. The good-natured boy who often told her, “I love you,” said he felt worthless, like a failure and overwhelmed.

Suicide is a growing concern among almost all demographics, she said. An OKVDRS report shows rates have steadily increased for 25-64-year-olds. From 2005 to 2012, death trends show suicides among Oklahoma veterans increased 34 percent. Between 2004 and 2008, Native American youth age 10-24 committed suicide at a 78 percent higher rate than their non-Native American peers, the data shows.

“We’re actually a family that believes in guns,” Evans said.

She said her son grew up around them and the family always kept them locked up. One evening, the family forgot to lock up a handgun. It was left on top of the entertainment center. Her son, the tallest person in the house, saw the weapon as he walked past it, she said.

Firearms are used in 60 percent of all suicides in Oklahoma, Woods-Littlejohn said. That number also reflects suicide trends across the United States.

“Even as we’ve seen increases over the years in number [rate per 100,000], the percentage of firearm usage stays around 60 percent,” Woods-Littlejohn said.

Michael Brose is CEO at Mental Health Association Oklahoma (MHAO), a statewide advocacy group that has grown substantially since 1993. MHAO offers resources and outreach programs, including suicide prevention training for the public and suicide screenings for teens and schools.

Brose said that when a person experiences extreme distress like depression or an inability to cope with change, they can quickly move out of the phase where suicide seems like the only way out.

He then urged people to envision that scenario if a person has ready access to firearms.

“The CDC cites that if you have a firearm in your home, the chances of someone dying by suicide in your home increases three to five times,” he said.

Brose said firearms are quick and efficient. OKVDRS data shows men kill themselves at a rate almost four times higher than women and more than half of men use firearms.

After Evans talked her son Nathan out of suicide in September 2015, she took him to the doctor.

“Nathan didn’t want anyone to know because he was embarrassed and ashamed,” she said. “He didn’t even want to tell his sister.”

Nathan refused to go to counseling. His doctor prescribed him Zoloft.

As time went on, Evans said everything seemed fine. Despite not seeing a counselor, which Evans attributed Nathan’s refusal to a betrayal of trust from a once-close relationship with a youth pastor, Nathan appeared happy. She said she asked her son questions and he always said he would never take his own life.

On Nov. 3, 2015, Evans arrived home after leaving her son alone for 45 minutes to find Nathan’s body in the family office/exercise room. At first, when she could not open the door, she laughed, thinking it was a practical joke. She said earlier that day, Nathan was very helpful and gave no indication that he planned to commit suicide. He had hung himself on a piece of exercise equipment.

Evans talked about the stigma associated with suicide and said people tell her about their experiences only because they know what her family has been through.

In her quest for more information, she learned suicide rates are rising and every 40 seconds, someone takes their own life.

“I can’t say its 100 percent preventable once they get the logic in their mind,” she said, “but there’s a lot that could be prevented.”

House Appropriation and Budget Chairman Rep. Earl Sears, R-Bartlesville, said Department of Mental Health and Substance Abuse Services funding was cut, along with most other agency funding, due to two revenue failures this year.

“We took some money from mental health to help balance the budget,” Sears said. “Right or wrong, good or bad, I’m just telling you that’s what happened.”

Brose said if people can’t access needed treatment, either because it’s not available or they have to go on a waiting list, the chances of recovery are lessened.

“The irony of that is you pay now or you pay later,” Brose said.

Brose added if people with untreated mental illness are left to deteriorate, their likelihood of incarceration also increases.

“It’s the most expensive way to house people,” he said. “It’s also clearly demonstrated that it’s the absolute worst outcome. People are released and they’re not connected effectively with services,” he said.