Oklahoma City is in the process of settling a seven-year lawsuit either monetarily or via land swap. 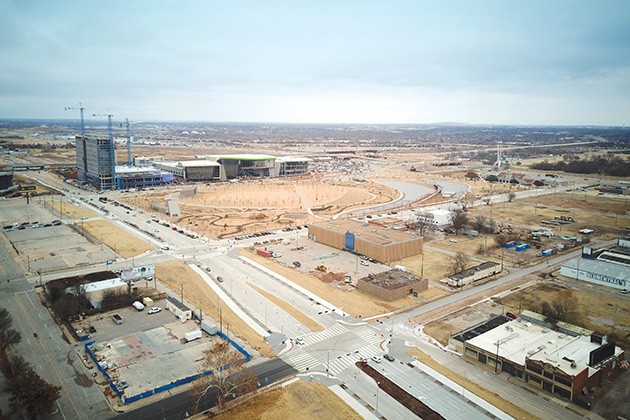 A land swap could settle a seven-year lawsuit with the city. The suit involves Hilltop Plaza LLC, which owned two properties that the city acquired through eminent domain for Scissortail Park’s construction. Despite the city’s acquisition, Hilltop officials challenged the amount they received and called for a jury trial to determine just compensation.

Hilltop Plaza’s properties were on the corner of Robinson Avenue and Oklahoma City Boulevard, which the Scissortail Park Foundation’s executive director once called the “billion-dollar corner,” as it will be situated across from the future Omni Oklahoma City Hotel, the new convention center, Chesapeake Energy Arena and a streetcar stop.

Despite the ongoing litigation, the city legally took control of the businesses in 2013 when it deposited $2.5 million to the court as part of the eminent domain process. Those properties are now part of the park’s promenade and the future home of an art installation.

Hilltop Plaza purchased the two properties in December 2007 and February 2008 respectively for a total of $2.26 million. In later court documents, Hilltop’s managing members write that they purchased the properties because of the location.

At the time of Hilltop’s purchase, construction of the Devon Tower had just been announced and there were discussions about a new convention center and Oklahoma City Boulevard.

“Based on these and other facts, we made a decision to purchase the property which is across from the [Chesapeake Energy Arena], close to the existing convention center and on the boulevard in the middle of all future developments,” Hilltop officials wrote. “We agreed to pay more for the corner lot because it is a hard corner with sizable frontage on Robinson and also SW 3rd & 4th Street.”

In 2010, the city sent Hilltop Plaza a notice that the city was interested in acquiring its properties for the new MAPS 3 Downtown public park project.

“We do anticipate that what we are
moving toward is the swap.”
—Amanda Carpenter click to tweet

In 2012, the city offered Hilltop a cumulative $2.175 million for the properties. However, Hilltop Plaza officials responded to the letter, saying the properties were some of the most valuable downtown, so they made a counteroffer to sell the properties for $9.571 million.

Because the two parties could not come to an agreement, the city began a condemnation case.

In 2012, commissioners were appointed to assess the properties’ value, and in 2013, they reported Hilltop Plaza should receive $2.5 million for  the two properties.

Amanda Carpenter, deputy municipal counselor, said the city then deposited the funds and took possession of the property.

“Hilltop filed what’s called a demand for jury trial, which means they were challenging the amount of the commissioners’ award,” she said. “Oklahoma City was preparing for trial, and ultimately we ended up coming up with a settlement agreement, which was approved by council. … The park has been built and built on that property. Previously, we were litigating the value. Now we’re reached a settlement agreement as to the value.”

The settlement agreement, which was approved just last month, lays out two possible options to close the case. Hilltop has until Dec. 1 to decide which option to pursue.

One option is a property swap. In exchange for Hilltop’s properties, which are already part of the park, they would receive the former Goodwill Industries building, 410 SW Third St.

If Hilltop officials take this option, they would return the $2.5 million they received in 2013 and pay the city an additional $650,000. Hilltop would also agree to close by Dec. 25 and demolish the structure within 60 days of closing if it chooses this option. Other stipulations include specific timing requirements of any future construction and ways the property can be used.

The other option is a monetary settlement. The city would pay Hilltop Plaza a total of $4.5 million, which would be made up of the $2.5 million commissioners assessed in 2013 and an additional $2 million.

Carpenter said the city doesn’t necessarily prefer one option over the other.

“Both of the options were acceptable to the city council because they agreed to it in the settlement agreement. We do anticipate that what we are moving toward is the swap,” Carpenter said. “Hilltop is going through what’s called a due diligence period, where they’re looking at the title to the property to make sure there’s a clean title; they’re looking at the environmental conditions. One of the provisions of the swap is that they have to demo the Goodwill building within 60 days of closing, so they’re looking at what that costs. They’re doing all their steps to make sure that if they elect to take the swap, that they can actually develop.”

The trial for the case is set for Dec. 9.