A member of the city council says using its Oklahoma City Thunder suite at Chesapeake Energy Arena for free is against the law.

Oklahoma City adopted a complimentary ticket policy in 2002 that allows the mayor and members of Oklahoma City Council two free tickets per event at Chesapeake Energy Arena, Civic Center Music Hall and other venues. The ticket policy states the official must use one ticket and a guest could use the other; tickets cannot be sold or given away.

It is quite a perk in this “big-league city.”

In 2006, former municipal counselor William Burkett wrote a letter reminding the city council that the purpose for attending the events is “the protection of the health, safety and/or welfare of both residents and nonresidents of the city who may attend events held in these facilities.”

Additionally, Burkett wrote that council members and the mayor received two tickets because “it would be entirely unreasonable to expect the city officer to dedicate his or her personal leisure time to public-function oversight duties without at least one person to accompany him or her.”

Ward 2 councilman Ed Shadid brought up concerns he had with the policy during the Jan. 29 city council meeting.

“In our arrangement with the Thunder, we have a suite which is a public resource. It’s for the use of the city council. The city council makes a policy, we can do whatever we want with that suite, we own it. … We could let some corporation use it and collect the revenue and put that into the general fund,” he said. “What’s unique about these tickets ... when you start getting into playoffs and NBA finals, you’re talking about $1,000 a ticket and everybody has a guest. The council’s going through potentially $15,000 of tickets in an evening.”

The suite is part of the lease agreement between the city and the Thunder, which states that the city is “entitled to the use of one arena suite for all events, free of any license fee.” The council’s policy is that the suite is reserved exclusively for city council members, the mayor and their guests. If none attend a game, the suite can go unused.

Though a value was never assigned to the city’s suite, prices for renting suites at Chesapeake Energy Arena range from $5,500 to $15,000, depending on the day of the game and the away team, according to Suite Experience Group.

Since October 2016, city council members and mayors have received almost 1,000 complimentary tickets for Thunder games, according to the council’s ticket request log obtained by Oklahoma Gazette through an open records request.

“Going to games is like work. Generally, a Thunder game is a nonstop meet-and-greet.” — David Holt tweet this

Former mayor Mick Cornett requested 72 tickets. Despite having his own tickets, mayor David Holt said he receives complimentary tickets for all Thunder games but has only used them for seven games.

Since the main reason for the suite and tickets is to oversee the operations, Shadid said it is odd that employees directly involved in maintenance or security do not get to use the suite. 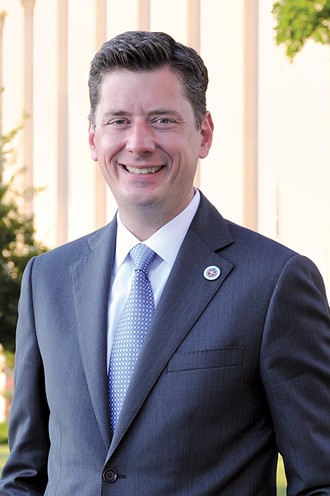 Shadid said the council and mayor are going to Thunder games to enjoy them and socialize, not to oversee the facility. He cited Burkett’s 2006 memo, which states that if the result of getting tickets or attending a Thunder game is “chiefly that of private benefit, an incidental or even ostensible public purpose will not save its constitutionality.”

“In other words, even if you were to notice some things about the ongoings of the [Chesapeake Energy Arena] and report that ... if the principal reason that you’re there is to watch the Thunder game for private benefit, that’s in violation of the law,” Shadid said.

McAtee disagreed, saying that attending a Thunder games does serve a useful public purpose. He told Oklahoma Gazette that he uses the tickets within the constraints of the policy and finds it beneficial.

“I’ve been told that it is perfectly legal. I do notify people when I see things that need attention,” McAtee said. “We get two tickets, and the policy is that I must be present for anybody to use the other ticket. So therefore, every game that I go to and take somebody, I am there. I do not give them away to people.”

Holt said going to Thunder games is often part of his job, like hosting the British ambassador at a game this week.

“For me, it’s because I’ve got some sort of post-game or other professional, mayoral responsibility to do,” he said in an interview with Oklahoma Gazette. “Going to games is like work. Generally, a Thunder game is a nonstop meet-and-greet. … I can’t speak for everybody else; everybody else has their own duties and ways they handle themselves.”

He said his position comes with more “ceremony” that requires him to be present at various events.

“I feel comfortable that the times that I have to go to the arena, that I’m fulfilling a public purpose, and beyond that, I leave it to others to decide,” he said.

Shadid brought up ethical concerns in pushing for the implementation of a third-party, independent ethics commission for the council and mayor.

“Let’s say that someone like myself feels that there’s a violation,” Shadid said. “Who do you take that to? Who do you ask to look at this standard and do some investigation? I’ve gone to the municipal counselor, I’ve gone to the police chief, I’ve gone to the city auditor — basically there’s nobody that you go to. It’s just the council policing itself. … The only way that somebody could challenge this is to bring this lawsuit.”

There should be an ethics commission that people can just turn ethical concerns over to, Shadid said. He also said most surrounding cities, including Tulsa, have that in place.

“That’s an unacceptable situation, and I would just ask that, with great urgency, we move the conversation forward on an ethics commission,” Shadid said. “Let’s work to find alternatives to endless litigation.”

McAtee said there is no need for the ethics commission, as there is already something in place for ethical concerns.

“We have an ethics number in the auditor’s office that, if anybody suspects any impropriety, they can call there and request an investigation,” he said. “I think that is perfectly sufficient.”

Holt said he is open to the idea.

“If that’s something a council member wants to push, I’m definitely open-minded. I personally can’t take the lead on every single thing because I don’t have enough time, but I don’t have a principled objection to it,” he said. “I have no idea why it hasn’t happened to this point. … Something of that magnitude would take many months to put together — and maybe that’s why it hasn’t happened yet — but it could be helpful.”