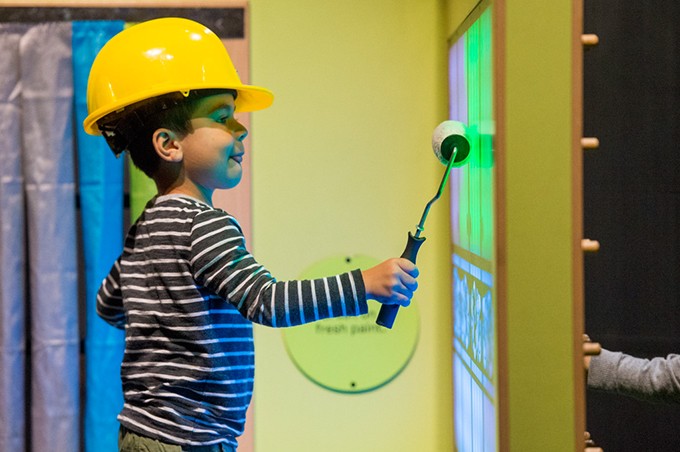 “It’s one of the exhibits that we get probably the most requests to have repeated,” Oklahoma Museum Network director Eileen Castle said. “We wanted an exhibit that was really designed for the preschool crowd, the 2- to 6-year-olds. ... We just sort of brainstormed on what kids really like to do, and imitating grown-ups is really one of those big sorts of things.”

Children put on hard hats, aprons and other accessories to complete hands-on tasks at stations named for “buddies” such as Eva Gardner, who needs help with outdoor work: laying sod, tiling her patio, etc.

Pipa Long-pipes, meanwhile, is a plumber challenging children to fit together PVC pipes and crawl through larger plumbing. Other stations include an assembly-required doghouse and a mock construction site complete with conveyor belts, wheelbarrows and climbable scaffolding.

“Depending on what you like, there’s something for everybody,” Castle said. 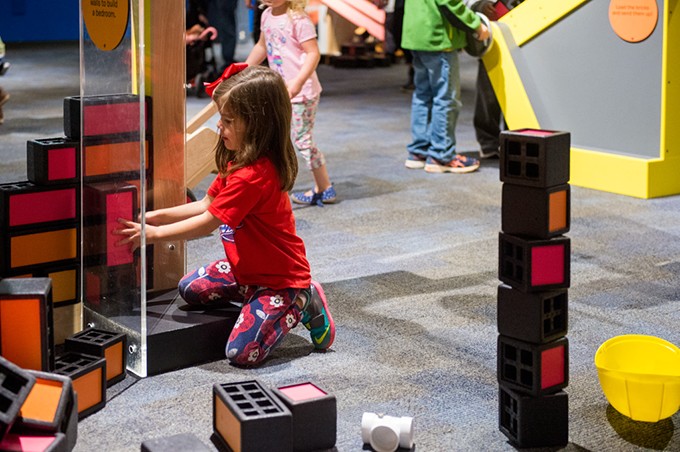 While some of the stations prompt children to measure siding or operate pulleys and serve as an introduction to “some really early physical science,” Castle said the exhibit’s main purpose is to encourage kids to practice critical and imaginative thinking and improve their hand-eye coordination.

“It’s primarily to get them involved in the creative process,” Castle said, “so there’s a lot of fine motor skills and growth motor skills that we’re working on developing in their pre-school development stages, but we also have … some really basic measuring and a little bit of basic physics: ‘How do you build the wall? What do you put on it? How many bricks do you need to go across?’ That sort of thing. In the tile, you can make patterns and stuff like that. So there’s some scientific reasoning behind it, but it’s really geared toward that developmental stage, so it’s a process-skill-driven thing.”