by Angela Evans and Ian Jayne

Not many Senate Bills are all that memorable, but in the world of Oklahoma craft brewing, Senate Bill 424 modernized Oklahoma’s archaic liquor laws. Before the law went into effect in August, breweries could serve only low-point versions of their beers onsite, which — let’s be honest — is like eating a salad when you crave a steak.

Since the passage of 424, Oklahoma craft-beer enthusiasts can now make pilgrimages to sample their favorite, fully loaded local beers, and breweries are rising to the occasion.

Taprooms have bubbled up all over town, replete with fresh coats of paint, gorgeous bars and a newfound hope. Not only do guests get to sample the latest brews, the owners and brewmasters are giddy to talk about their creations and their plans for the future.

Brewers can also use taprooms as a test market, allowing guests to sample small-batch concoctions and share immediate feedback.

These breweries are tucked in industrial parks or hidden on the outskirts of town, which makes finding them almost like a scavenger hunt for suds.

Sure, you could hit a brewery here and there, but why do that when you can make a day (or two!) “hopping” from place to place? From refined and polished to funky and industrial, each venue reflects the essence of each brewery’s personality. So ready those beer goggles, queue up ride services (read more about safe ride options below) and prepare to meet your beer makers: a group of clever, innovative and motivated individuals who make Oklahoma City more effervescent than ever. 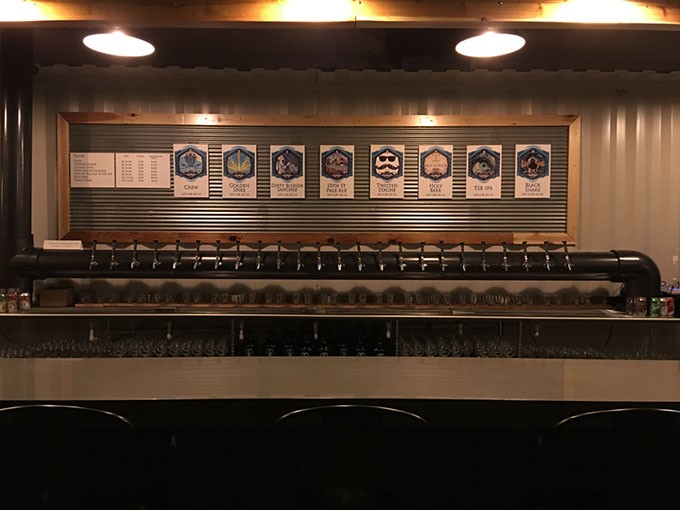 Twisted Spike is one of the largest taprooms in Oklahoma, located at 1 NW 10th St., just off Interstate 235 outside downtown. The polished space features a beautiful bar at the front entrance of the shotgun-style venue.

Seating is placed along the sides. One side features the well-appointed taproom that rivals any high-end bar in town. A glass partition separates the taproom from the brewery and gives a through-the-looking glass view into the heart of Twisted Spike’s operation.

In a more private area toward the back, a funky, tie-dye design emblazons the brick where the sours are brewed.

The beer roster ranges from light-and-fluffy Dirty Blonde Sanchez to more complex, chocolatey stouts and downright doughy IPAs. Patrons can pop by for a quick beer or a flight, but Twisted Spike also offers a variety of venue tour packages for groups that include an inside look at the brewery, beer tastings and some sweet swag. Visit twistedspike.com.

The Anthem taproom, 908 SW Fourth St., places beer nerds right in the action. The sounds of churning machinery blend with the music playing overhead near the rustic wooden bar.

Long wooden benches inhabit a cozy nook next to the huge garage door that is open, letting the breeze blow through as guests sip on their refreshing Mango Gose or herbal Arjuna.

The juxtaposition of the bustling industrial side of the business does not distract from the cool vibe the open space provides. Look for events, including live bands and performances, to accompany regular beer releases.

The space lends itself to a great party atmosphere (even weddings), yet is still comfy enough to hang with friends and even play a board game or two. Visit anthembrewing.com.

The gang at COOP Ale Works, 4745 Council Heights Road, recently added the finishing touches on their new taproom. It captures the industrial essence of the brewhouse with slate gray punctuated by murals featuring brightly hued labels for which the brewery is known. But on the other side of the sleek man-cave is a huge outdoor oasis that food trucks, games and live bands will take over this summer. The brewery is located about 10 miles from downtown proper, and the jaunt is worth it, if not just for the stellar lineup of beers, then for a glimpse into a working brewery.

Each Saturday, COOP hosts a release party offering brews not available for sale anywhere else. COOP brewmasters are stoked about this summer’s seasonal release, Saturday Siren, an ode to the tornado tests that wail at about noon every Saturday.

The “beer whistle” brew is a dry-hopped, very hop-forward American-style pilsner perfect for summer barbecues. Go ahead and schedule a ride service now, because COOP’s cozy setup is the perfect place to while away a gorgeous summer day. Visit coopaleworks.com.

Some serious sudsy alchemy is happening in Norman. 405 Brewing Company, 1716 Topeka St., utilizes a creative approach with its proprietary brews. It isn’t afraid to experiment with red wine, sake or white wine yeasts. Brewmasters use a unique method to infuse coffee into their stouts, using a different type of bean for each batch.

The Trae IPA is a fan favorite with its tropical flavors, mellow hop character and just a hint of farmhouse funk. Many of 405’s beers reflect the brewer’s not-so-secret addiction to pop music. The Cool for the Summer brew from last summer was a wine yeast beer brewed with limes and locally foraged spearmint, giving a cooling sensation with a perfect acidic bite. This year’s summer release is Cruel Summer, a tart pineapple coconut IPA that also pays homage to the Bananarama song from the ’80s.

The fruit-forward beers from 405 can be the perfect mixer, so feel free to add a couple glugs of gin with the grapefruit sour for a perfect poolside bevvie. Watch for upcoming events and special barrel releases, because these one-off brews go fast. On Saturdays, 405 hosts food trucks providing eats that pair beautifully with its craft brews. Visit 405brewing.com.

The beers coming out of Roughtail Brewing Co., 1279 N. Air Depot Blvd., in Midwest City have long had sacred spots on taps across the region. Roughtail also was one of the first to establish a taproom experience before the new laws went into effect. Classified as a bar, not a taproom, bushels of folks would visit for brewery tours but could only have beer in the designated area. All that has changed, and now the brewery and taproom are a winning combo.

Every Friday is “new brew” day and offers suds that you can’t get anywhere else in town, such as Roughtail’s next series of E-Juice, which is a variety of fruited IPA. Striking murals painted by well-known local artists give the taproom a funky arthouse feel, but seating is limited. The best bet is to book a tour via website to get the full experience. Roughtail, because of its location in Midwest City, is one of the few breweries that can sell cold, strong beverages for off-premises consumption any day of the week. Visit roughtailbeer.com.

Elk Valley Brewing Co., 520 N. Meridian Ave., has been on the scene for years, winning accolades and fans along the way. But it all started with a guy who liked to brew beer at home.

His hobby grew into a full-on operation that is about to get even bigger. Currently, Elk Valley shares space with the folks at Mustang Brewing Company, but at the end of May, Elk Valley relocates to Moore temporarily while its new-and-improved, full-fledged brewery and taproom is built in the old Midtown theater at NW 11th Street and Hudson Avenue.

The target open date is spring 2018. But before brewer John Elkins shuffles around briefly, he will be brewing one more batch of “bon voyage” beer. At the end of May, Elk Valley releases a big, pillowy double IPA. The cans will be available during the party only. Elk Valley beers will still be available at liquor stores and restaurants while the new space is being built in Midtown. Visit elkvalleybrew.com.

For people who would rather be safe than sorry — or when your designated driver has enjoyed a few too many — several metro organizations and companies offer services to safely transport tipsy drinkers home.

While AAA does not offer its Tipsy Tow program nationwide, AAA Oklahoma often offers free rides during holidays like Christmas and New Year’s in cities across the state, including metro OKC and Tulsa, Lawton, Shawnee and more. Visit ok.aaa.com/content/tipsy-tow.

Another new OKC metro service aims to reduce the number of drunk drivers and to pave the way for safer roads during holiday events. Hasbrook & Hasbrook personal injury lawyer Clayton Hasbrook recently introduced a reimbursement plan for would-be drunk drivers who make the choice to use a ride service.

Riders age 21 and over who take a one-way ride to a safe place within the metro on St. Patrick’s Day, Cinco de Mayo, Independence Day, Labor Day, Halloween and New Year’s Eve can receive reimbursement up to $30.

To receive reimbursement, riders must send to Hasbrook their ride receipt, a photocopy of their valid driver’s license and an email linked to PayPal. Riders are limited to one reimbursement per household and the first 1,000 takers. Visit oklahomalawyer.com.

Marketing itself as a much cheaper alternative to the legal costs and consequences of driving while under the influence, Dryver is a multi-tiered service that offers car pickup, hourly drivers and teams of drivers during events.

Oklahoma City users can make reservations, driver requests and GPS track via the Dryver app, available on iOS and Android platforms. The personal driver service costs $15.95-$20.45 an hour for chauffeured unlimited stops, pickup service is $25 an hour plus mileage and event services are $45-$53 for each driver team. Visit dryver.com.

The University of Oklahoma (OU) has offered its SafeRide program since 2004. Also an app-operated system, SafeRide provides students with multiple options instead of driving while under the influence.

Covering OU students within Norman City limits, SafeRide runs 10 p.m.–3 a.m. Thursday through Saturday, offering an on-demand taxi option or a bus route loop. Students use the OU Innovate app to choose the bus ride option (operated through OU Parking Services) and then wait at the bus stop. Riders show their PIN to the driver to confirm their ride and can bring up to three OU or non-OU riders with them.

SafeRide’s taxi service also requires the OU Innovate app to order. The service currently partners with Yellow Cab of Norman. The student can bring as many guests as the taxi is able to accommodate. Visit ou.edu/studentaffairs.