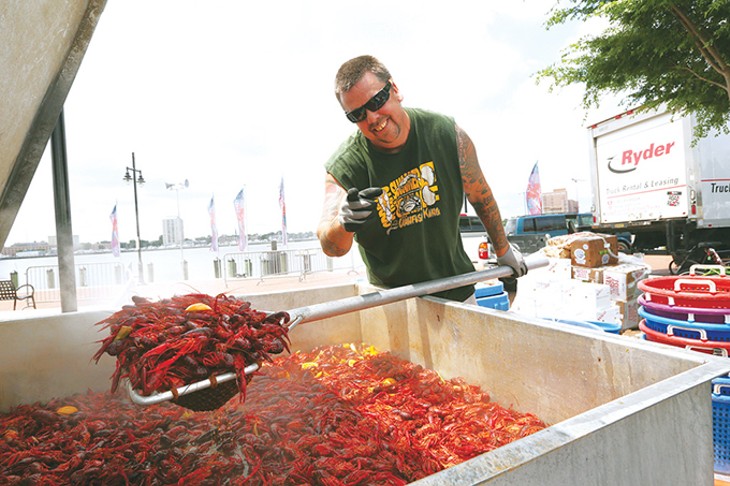 Summer is a time for abundance, and what better way than to celebrate the harvest by enjoying some Oklahoma specialties at food festivals across the state? Through August, from crawfish to blackberries, there is a food festival for every hungry Oklahoman.

Attendees can learn more about Chisholm Trail history at the western-themed Olde Towne located on the southern side of the festival grounds. It features live stables with Clydesdales, a recreation of a general store and blacksmith demonstrations.

This local delicacy has been celebrated with its own festival since 1979. If you are not familiar with calf fries, you might also refer to them as Rocky Mountain oysters. Nearly 1,000 pounds of calf fries are consumed during the festival, which welcomes as many as 3,000 visitors annually, according to its website.

If you don’t want to venture into the realm of calf-fry tasting, there is plenty of other food for sampling, including Cowboy beans, cobblers, salsa and bread. Tasting begins at noon, and attendees can cast a vote for their favorite competitors. The festival coincides with Vinita’s Big Country Weekend, which includes nightly performances at Will Rogers Memorial Rodeo.

For the first time this year, Red Earth is expanding beyond the Cox Convention Center food court to bring in outside food trucks that will be located at Myriad Botanical Gardens.

Braum’s might’ve been founded in Emporia, Kansas, in 1968, but its headquarters has been located in Tuttle since 1975. Celebrate Oklahoma’s most beloved ice cream by sampling flavors donated by Braum’s and participate in an ice cream eating contest or a homemade ice cream competition.

It’s never too early to get your ice cream fix, as the festival begins at 9 a.m. and features a parade starting at noon. The festival also features carnival rides, live music and a classic car show.

The world’s largest hand-fishing tournament is much larger than the competition itself. The event has expanded to include a tournament eve concert June 15 that features Stoney LaRue and The Judson Cole Band.

The tournament runs until 6 p.m. June 16, but there is plenty of entertainment for spectators, including separate catfish- and noodle-eating competitions. After the tournament winners are announced, the band Shotgun Rider will close the festival with a performance.

The McLoud Blackberry Festival dates back to the 1940s, when the berry was a cash crop for the Pottawatomie County town. Through the 1960s, McLoud was the self-proclaimed Blackberry Capital of the World, and a crate of its blackberries was once sent to President Truman.

Although the industry has receded, its legacy is still celebrated in conjunction with being the longest-running Fourth of July event in the state. Friday night features a musical performance by Blackwater Smoke at 9 p.m. The festival opens 9 a.m. Saturday and features a parade, a blackberry baking contest, a cobbler eating competition and a performance by Oklahoma City’s The Wise Guys band at 8 p.m.

Not only is admission free, but so are the namesake watermelon slices available to the 20,000 visitors expected to descend on the town with a population of 1,275. Watermelon cultivation in the Rush Springs area predates statehood, and the town promotes itself as the Watermelon Capital of the World.

The festival has been held annually since 1948, and Saturday events include a 5K Watermelon Run, live music, country line dancing, a Watermelon Queen contest and Elvis Presley impersonators. The Rush Springs Rodeo at the nearby Rusty Acres Arena runs concurrent to the festival.