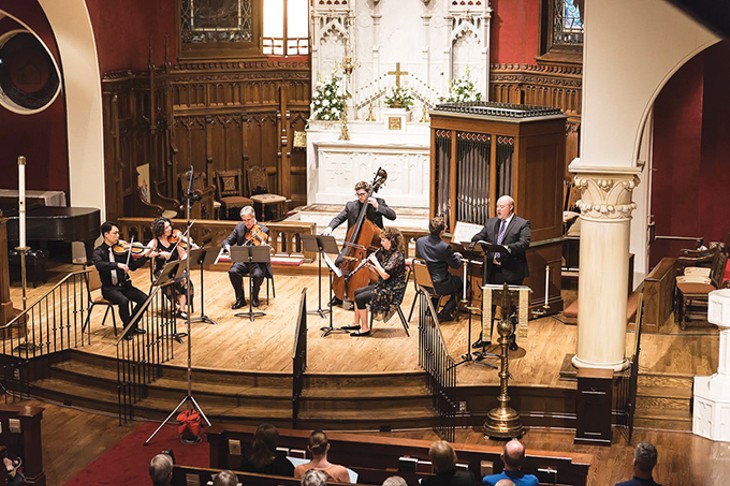 Picture someone getting stabbed in the shower and odds are good you’ll hear a specific song. Bernard Herrmann’s theme for Alfred Hitchcock’s Psycho is so iconic it’s almost impossible to think of one without the other.

“If you have watched the movie, of course we have to talk about the shower scene,” said Amy I-Lin Cheng, co-artistic director and pianist of Brightmusic Chamber Ensemble, which will play Herrmann’s “Psycho Suite for String Quartet” in its summer concert series. “When it’s arranged for four instruments — two violins, viola and cello — it works perfectly. It captures both the lyricism and the setup for emotional suspense, but also that really stunning high-pitched voice that went with that murder scene. … The orchestration is already very concise so it translates very well to a small ensemble.”

Titled Brightmusic Goes Hollywood: The Chamber Music of Film Composers, the ensemble’s 2018 summer festival comprises four concerts of compositions by musicians such as Herrmann, Ennio Morricone and John Williams, who are known for their work on film scores. Though each concert will include a piece from a feature film, the majority of each program will consist of the composers’ other works.

“The idea is that each program, we will have something that is recognizable from actual film music, but with the others, our main goal is to introduce the classical work, the chamber music work by the other composers,” Cheng said. “Sometimes the composers are either known as film composers and their chamber music work is completely overlooked, or they are known more as chamber composers and their film music is actually not credited. … Early in the film industry, a lot of such composers were not credited. They were known as the ‘ghost composers.’”

One such composer was Mario Castelnuovo-Tedesco, who worked on many classic films for MGM and taught music lessons to many future soundtrack composers including John Williams and Henry Mancini.

Though the works of these composers are often underappreciated, Cheng said the ensemble’s musicians are excited to play them.

“Knowing that these composers have written so much for film … actually really helps us understand the sort of theatrical elements in the music,” she said. “I can guarantee that these composers’ music will be full of drama that will inspire our imaginations.”