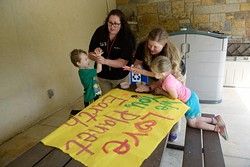 Last month, when Rachael Robinson dropped a few Mentos into a two-liter bottle of soda, she diverted her eyes away from the geyser of foam to the preschoolers watching the science experiment. As the foam erupted, Robinson saw their eyes light up as they learned something new.

“I like to call it their aha moments,” said Robinson, Oklahoma City Zoological Park and Botanical Garden education director. “I see that wonder in their eyes. The passion and excitement that I hold are passed down to them, and hopefully, they will pass it along to future generations.”

As education director, Robinson is continuously leading children, teens, families and adults toward aha moments. They come during informal and formal education, sometimes as staff introduces one of the zoo’s 1,400 species to a group or through its STEM-rich learning curriculum.

While zoos are often branded as tourist attractions, the experience is more closely aligned with that of a museum. After all, zoos exist to educate.

For one thing, it’s quite a common sight to see parents reading an exhibit sign and relating the information to their children; however, it’s more common for visitors to be awed by feeding a giraffe, moved by watching a sea lion playing in the water or amazed by giant Galapagos tortoises amble through their habitat.

The learning potential is at its greatest with Robinson or any of the education staff or volunteer docents. As a living classroom, the zoo leads guests down a path of knowledge and compassion for wildlife.

“Our animals don’t have a voice,” Robinson said. “It is our job to tell their stories and connect them with those who can become their ambassadors. Anyone who comes to a zoo program leaves with that connection. We tell them the facts about animals, and they become the animals’ ambassadors.”

OKC Zoo has been a strong and active partner in informing Oklahomans. Its education department roots trace back more than a half-century.

Within a decade of zoo leaders placing education at the forefront of wildlife conservation efforts, the first ZooMobile — donated by an area auto dealer — hit the road to deliver animals and educators to schools, libraries and community events throughout the state.

That same year, the zoo introduced the Junior Curator Program, an annual high-school student volunteer program in which they work with zoo animal care, education and special events staff.

It’s not uncommon to interact with a staff member who got their first introduction to a zoo career through the program.

Nationally, zoological organizations assert that a simple visit can inspire people to take action on behalf of animals and the environment. A survey by nonprofit advocacy and accreditation organization Association of Zoos & Aquariums (AZA) found that visitors leave with a better understanding of conservation effects.

Around the grounds of OKC’s zoo, leaders express a similar sentiment.

Robinson explained that the education programs stay true to the zoo’s mission, which is “connecting people with our world’s vanishing wildlife and wild places.”

“People aren’t going outside and valuing nature anymore,” Robinson said. “Richard Louv (an author and co-founder of Children & Nature Network) coined the term ‘nature-deficit disorder.’ We see people staying inside because that is where technology is. With our preschool program and our summer camps, we get kids out — out into the zoo and learning about animals. This is nature.”

When youth and even adults connect with the zoo animals through educational programs or stroll through exhibits, Robinson said, there are opportunities to transform their thoughts on wildlife.

“To inspire that future generation of environmental stewards is the goal,” she said.

The education programs drew more than 54,000 people from July 2015 through June 2016. During that time, 1.03 million visitors walked through OKC Zoo’s grounds.

OKC Zoo’s is one of the more than 230 AZA member facilities. The organization reports its members reached 183 million perople last year — more than the number of visitors to all professional sporting events combined.

There’s no doubt about it; summer is beginning to be the zoo’s busiest time of the year. Not only do families and groups — like schools on field trips — embark on the zoo for a day trip, but camps begin soon.

During the first week of June, children of all ages go to the zoo for summer camp, which runs for 10 weeks. As part of the zoo’s most popular education program, campers make visits to the animals on special tours and enjoy games and crafts.

Lessons taught range from learning how animals survive in their natural habitats to animal behaviors.

The zoo’s signature outreach program ZooMobile is gearing up for visits throughout the state. At each stop, zoo staff expect the public to line up and watch as education staff bring animals out.

At times, whether inside a library showcasing an animal or at a wildlife exhibit on the zoo grounds, an animal will steal the crowd’s attention away from an educator, Robinson explained.

“They might no longer be listening to me, but they are learning,” Robinson said. “That’s what we are here for.”