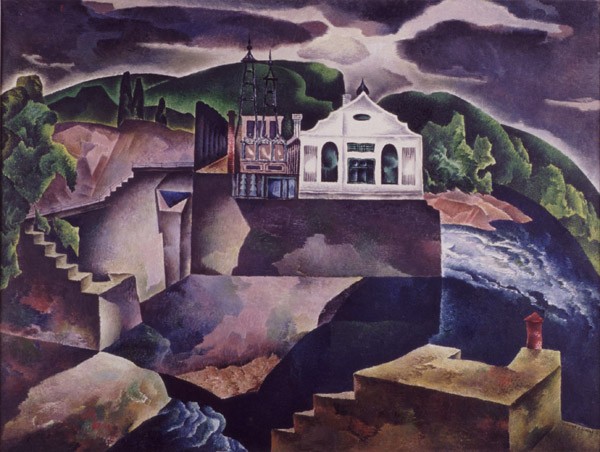 Buildings, sidewalks and roads created by the Works Progress Administration (WPA) are common around Oklahoma City. Formed in 1935 in an effort to pull America out of the Great Depression, the WPA employed millions of people, mostly unskilled men, to help build their country’s infrastructure. To this day, the WPA stamp can be found on pathways and buildings all over the metro and the state.

Most of the WPA was focused on improving infrastructure. But The Federal Art Project, a lesser-known program for artists that employed 3,500 by 1936, was instrumental in launching the careers of many American painters. Some is featured in Oklahoma City Museum of Art’s The Complete WPA Collection: 75th Anniversary, which runs through July 2.

Located on the second floor, much of the exhibit features depictions of American landscapes, labor, infrastructure and development. All works are figurative, as a government mandate restricted the WPA from funding “abstract” art.

A highlight of OKCMOA’s new collection are two artists with local ties: Muskogee Creek-Pawnee-Wichita painter Acee Blue Eagle and printmaker Elmer Capshaw. Blue Eagle’s “Indian with Red Blanket,” painted with tempera on an illustration board in 1935, is a simple yet bold depiction of a native figure and is reminiscent of the clean lines and blocked colors that would define later painting styles. It is probably the most “modern” piece in the collection.

The majority of the paintings are uniform in style and subject matter; simple, almost staid depictions of sweeping farmland and stacks of factories.

Tucked into the pastoral exhibit, however, are some other surprises.

“South San Francisco Trees,” a watercolor on paper painted by Chinese-American artist Dong Kingman sometime between 1935 and 1940, appears at first glance to just be another landscape. Upon closer inspection, however, the lines of row houses become distorted, like the viewer is peering at them through the bottom of a glass jar. The trees — dark, towering and dominating the piece — are gray swirls lurching dangerously close to abstraction, as are the two rakishly painted figures who stand in their shade.

Another standout is “Indian Town, Ketchikan, Alaska,” created by Austin Merrill Mecklem. In 1937, the WPA tried to stage an exhibition as part of the Alaska Art Project designed to promote the largely unsettled territory. While there’s nothing extraordinary about Mecklem’s subject matter (neat rows of houses lining the bay of a fishing village), the work’s composition sets it apart.

Mecklem’s Alaska home provided a startlingly different set of scenery to choose from, and he placed the smoke rising from the villagers’ labors in the center of the painting. It’s as if the industry were the sun and the homes and day-to-day life the planets that orbited it.

Sadly, almost all of the Alaska Art Project works were destroyed in a 1937 hotel fire, but the remaining pieces, as well as the rest of the WPA collection, are a straightforward look into our country’s history.