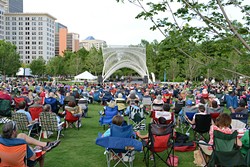 More than 1,500 people occupied the Great Lawn at Myriad Botanical Gardens on June 7 for the inaugural concert in the 35th season of the Sunday Twilight Concert Series. Offered by Arts Council Oklahoma City and sponsored by Devon Energy, the shows are free and family-friendly.

Christina Foss, Arts Council Oklahoma City communications director, said all the council’s events or programs are meant to bring the community and arts together.

“When looking at our community, we always ask what needs they have in terms of the arts,” Foss said. “A free event open to all ages makes it possible for more people to encounter the arts.”

The events are much like a family outing or friendly meetup. Many bring blankets, lawn chairs and picnic dinners, much like they would to a festival. Shows are 90 minutes, with a 10-minute intermission.

“People who attend are encouraged to enter a drawing during intermission,” Foss said. “Prizes are given away ... and it’s usually something like a pass to the Oklahoma City Museum of Art or free admission to Science Museum Oklahoma.”

Pets are prohibited, and Foss said it is mainly for the safety of animals and attendees. Glass containers also are prohibited, but other containers including ice chests are welcome. The environment is family-friendly, and security is present at all shows.

The performers are eclectic, and they tend to be acts that have worked with Arts Council in the past, Foss said, usually at events like the arts festival or Opening Night. There is a selection process, though, so that first-time musicians and bands do not get excluded from consideration.

Katelyn Carter is the series director, and she said she does her best to curate an interesting assortment of music genres. She also mixes regional acts with local ones so visitors can often see some of their favorites. In fact, Beau Jennings, from Inola, also made this year’s lineup.

Jennings is in the midst of a busy year. His new album, The Verdigris, dropped in January, and his documentary, The Verdigris: In Search of Will Rogers, made its Oklahoma premiere at deadCENTER Film Festival last weekend.

In addition to Jennings, Denton, Texas, transplant Horse Thief closes out the season on Sept. 27.

This year’s schedule covers the musical spectrum. It is perhaps a stretch to say there is something for everyone, but there is a genre for nearly every taste.