While many growers keep their flower hidden as much as possible from natural conditions, Red Dirt Sungrown bathes its flower with Oklahoma’s plentiful rays. 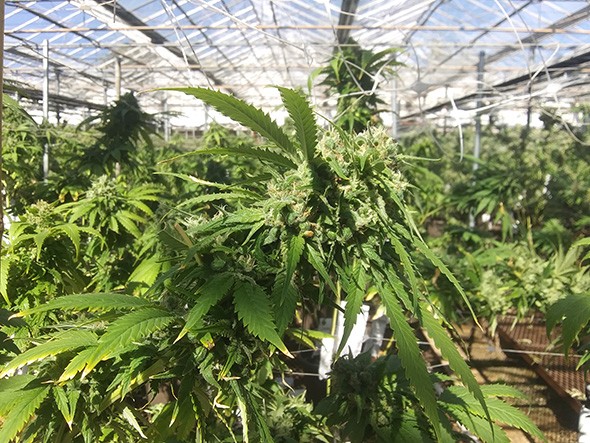 While cannabis might be as new of a crop for Guthrie Greenhouses as it is any other Oklahoma farmer, it has the advantage of having more than a century’s worth of experience in horticulture at its site.

“Capital City Greenhouse first started in 1892 with the Furrow and Son Company, and they had it until 1983,” co-owner Jesse Tischauser said. “At that point, the Irwin family bought it and they held until 1995. And that’s when her dad, Herb Suehring, purchased it. He actually came down here in 1985 to work at this facility, did it for about five or six years, quit, went and worked in the industry and sold soil and pots, the same stuff we still buy now, and then he came back in ’95 and bought it. Then Tara and I moved out here from Wisconsin when she graduated college in ’97. I went to Oklahoma State [University], got an engineering degree, did the oil field thing for a while and then came back here to work with her and her dad in 2008 when he kind of was retiring, and then he came back to work last year when we got the hemp license and then the marijuana license.”

Thus Red Dirt Sungrown cannabis and the hemp portion, Herb’s Herbs, were born. Cannabis now grows in the greenhouses where flowers and vegetables grew. They received their licenses last October and had their first harvest the week of April 20.

“It wasn’t easy to get seeds or clones. Not every variety was readily available. It was difficult to find right away because the market was moving so quick. There was nothing here, so that was our biggest challenge, just getting product to get started. We didn’t have anything,” Tara Tischauser said.

Luckily, they weren’t starting exclusively from scratch; the framework for a successful growhouse was already there.

“This facility was actually built in 1972 or ’74, somewhere in there, and it was the first Dutch glass greenhouse west of the Mississippi River,” Jesse Tischauser said. “It was a big deal. It was in all the trade magazines. … It provides the most normal outdoor, full-spectrum light you can get, which is why our stuff has so much terps in it. It’s basically like growing outdoor all year, but we can control the environment a little bit more, we can take care of the bugs a little bit more. ... The benefits of being outdoor in a greenhouse is the full spectrum of sun. You’re getting a higher quality, higher spectrum flower inside here.“Someone with about a 10,000 square-foot grow indoor Oklahoma City, they pay about $10,000 a month in electricity in July, which is when we have the most stuff running to keep it cool. We spent $2,000 a month on 50,000 square feet. We have four different growing seasons. Our sunlight changes, our temperature changes, humidity changes, so in spring, everything was going well and nice and dandy. The summertime, everything just took off from the heat and the sun. We went from a five-week veg cycle to a two- to one-week veg cycle because everything grew that much faster. So then you get the gloomy parts and then we don’t have all that highlight. … We’re working on getting supplemental lighting once we get OG&E to give us all the power we need. So on those days, you can turn the lights on just like an indoor grow and keep the growth rate higher.”

“It was the first Dutch glass greenhouse west of the Mississippi River.”
—Jesse Tischauser tweet this

The Tischausers said the seasons have even determined which type of cannabis Red Dirt Sungrown grows.

“We’re also learning with the different growing seasons, there’s different varieties that do better with each one,” Tara Tischauser said. “So being finally a year into it, we’re starting to figure that out and be able to schedule it. Like, these work a lot better with the higher humidity or these work a lot better when you don’t have as high light, so that’s been a learning curve, but we’re learning that so that’s exciting and that should help us in the future quite a bit.”

“In the summer, we had really hot temperatures in here, so everything is very sativa-heavy, similar to an outdoor grow in the summer months, and then now that we’re cycling into some cooler weather, we’ll start putting some more indica stuff in there,” Jesse Tischauser said.

Red Dirt Sungrown operates on a continuous growing cycle. It has eight flower houses on one side of the property and 12 growhouses with flower on the other.

“We harvest one of the eight and one of the 12 every week, which is about 900 plants,” Jesse Tischauser said.

Like other growers, the Tischausers are learning that cannabis is a finicky, demanding plant that operates best under particular conditions. 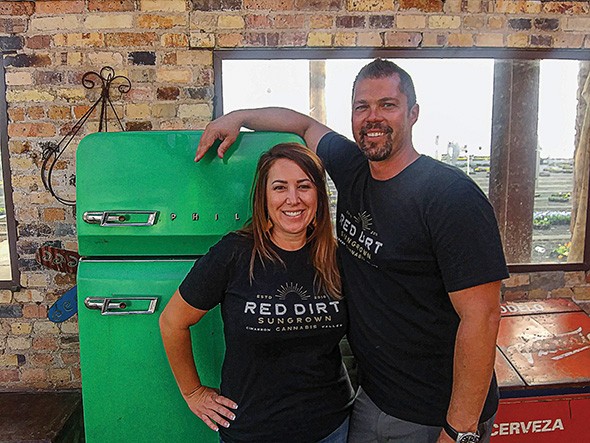 “You can stuff money into growing this, whereas a petunia you really can’t. You just got to let Mother Nature grow them for us,” Jesse Tischauser said. “It’s a slow process. It’s five months from seed to when you can sell it, know that it’s good or bad. And if it doesn’t work, you’re like, ‘Shit, man. We just wasted 500 plants over the last five months.’”

“We’re not out much with our mistakes. It’s just learning,” Tara Tischauser said.

“We don’t have any investors. We’re fully profitable at this point already, which is pretty nice to say,” Jesse Tischauser said.

“We’ve got nothing to lose at this point,” Tara Tischauser said.

The Tischausers are not turning their backs on their roots in favor of the newest cash crop. They will continue to supply the bedding plants that other businesses rely on that have been their bread and butter all these years.

“We’re really trying hard not to affect that business because there’s literally no one else in Oklahoma that does it. Our biggest competitor for bedding plants is in Michigan and we sell to all the stores that are just right below the Home Depots and Lowes and Walmarts,” Jesse Tischauser said.