The first of its kind in the state, the Sunny Dayz Mural Festival is a public art event celebrating female-identifying and non-binary artists.

“Sunny Dayz seeks to uplift and support artists who have been subjected to inequity based off of age, race, and gender. Our core values include a commitment to equitable opportunity and wages, dedicated wall space to “newbies” regardless of age, and the initiation of our high school mentorship program that seeks to empower and educate self identifying women and non binary high school students interested in the arts,” according to its website.

Sunny Dayz Mural Festival founder Virginia Sitkes said the idea had been in her head for years but she was able to make it a reality this year.

“An all-female mural festival is something I’ve wanted to do for a couple years now. Just kind of didn’t have the right tools, I guess, or it just wasn’t like the right time. And then back in December, I hopped on the Oklahoma Mural Syndicate Board. February was our first meeting because it took a little holiday break and I pitched the idea,” she said.

“The first week of May is when we kind of launched Sunny Dayz to the public. And then, about a week later, our applications for artists went live. For the future, it’s going to be open to anyone. However, it was just Oklahoma artists this year due to COVID and due to budget and timeframe. A week after it launches, we put out the application and that’s when we opened for two weeks. And we got 89 responses,” Sitzes said.

Here is a look at four of the 37 artists who will be represented with live work on 33 walls during the festival.

“It was actually on a dumpster for Scissortail Waste Solutions,” she said. “And then about a month later, I participated in the Mural Fest 66 in Miami, Oklahoma and OMS puts that on as well. Later that year, I participated in Plaza Walls and then also, Chisholm Creek had these semi-temporary, big wooden panels that were blocking construction and so that was a group of us who painted there as well. And so 2019 was kind of the year I was able to enter into more public art stuff.”

Also a founding member of Art Group, communal art has always been a focus of Sitzes.

“I’m a printmaker, mostly, and also a painter. But with print, you’ve always got print shops with multiple people working and lots of print exchanges and collaborations going on. And so I kind of got the same feels and vibes with mural festivals. You’re creating this awesome community of artists working together and hanging out having fun,” she said.

Process and product are inseparable in Sitzes’ work.

“I don’t do a lot of hyper-realistic stuff. It’s a lot of abstract expressionist-esque, I guess. Very process driven, and so tons and tons of layers. The idea for the past few years I’ve mainly been playing with is all these layers of life. What do we choose to try to cover up? What peeks through and no matter what we do to try to cover it up? And kind of just reflecting on what I made at specific times, so kind of putting pieces in a context and then learning and discovering things from there,” she said.

Sitzes’ is featured in the Print on Paseo exhibition in the Paseo Arts Association Gallery until July 31. One of her two pieces in it won “best in show.” Opening a week after Sunny Dayz, the Connect: Collect Print Exchange & Print as Object exhibition will open until October 15. The opening reception will be Sept. 10 from 5 p.m. to 8 p.m. at the Oklahoma City University Nona Jean Hulsey Gallery.

Marium Rana first got involved in the Oklahoma City metro arts scene through Momentum when it was in Norman, she said.

“I had a pretty ambitious project in mind for a few years. It was to do three, 20-foot double-sided paintings and so I got accepted to be one of the spotlight artists for that,” Rana said.

“I come from Florida, in St. Petersburg and Tampa, where street art is pretty big and I’ve done a couple of murals myself. I’ve done one in Joshua Tree, right outside of the Joshua Tree Art Gallery, I had an artist residency there, so I did that and then I did a mural in Tampa. I did one in college, in a restaurant. So I knew it was something that I really loved. I love painting miniatures, and I also like painting murals. It’s these two parts of my personality where I like to do work that is like small whispers and very personal and then I also like to do this large work that has to be seen and is begging to be noticed, and so those two parts of myself exist. And I enjoy taking a break from each one and, you know, going and doing small works and doing larger works.”

Born and raised in Long Island, New York, Rana uses both her Pakistani heritage and her American upbringing as inspiration for her work.

“The name of the artwork is going to be LETTING GO. And within this year and a half, a lot of life changes have happened. I’ve become a mother for the first time. Both of my grandparents passed away. I moved to Oklahoma from Florida. I just had a lot of change in my life, and I realized in order to embrace this change, I really had to let go of some parts of myself from before. And so this work is going to be reflective of my Pakistani heritage,” she said.

While visiting Pakistan, her grandmother passed away on Valentine’s Day and her grandfather died of COVID-19 in April.

“A lot of loss was happening around, as we’ve had friends that have passed to COVID, and so I realized there’s a lot of like, breaking of the previous self happening during quarantine. And during this time,I was like, ‘I just need to, like, go with life.’ Go with things and let things go as they’re happening. Understand it, and process it and not fight against the current. And so this work is about that. And the way that I reflect that is through kites … [Family members] were flying kites from the garden [of her grandparents’ home] and that was that moment of serenity and peace that I want to replicate in this mural,” she said.

Her next mural will be for Plaza Walls in October, Rana said, and her work will be featured at Oklahoma Contemporary during an exhibition in January. 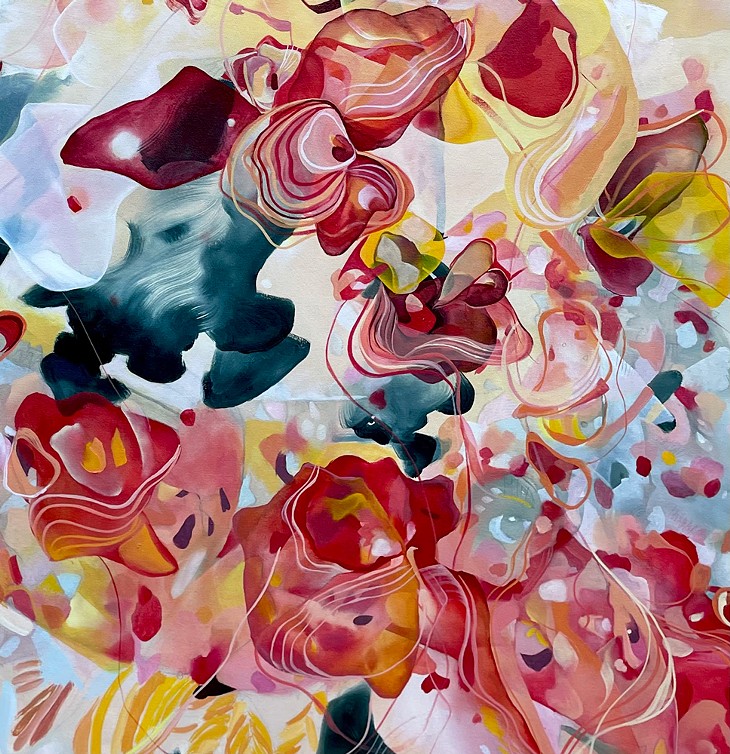 Sunny Dayz will be the third mural Kalee Jones W. has created.

“I’m a spontaneous composer. I don’t know what’s gonna happen, I just started going around with color and getting really into it and something emerges,” she said.

“I would lie in the grass, cup my hands around my eyes, and gaze up into the clear blue void called “sky.” With my back to the earth, I imagined that what I saw before me was all that ever existed; I was suspended in the overwhelming universe, at peace within its infinite non-embrace. As an artist I approach my canvas with this same wonder. The blank surface mirrors the eternal sky I found comfort in as a child and I am free to meddle in ‘“all that ever existed,’” according to her artist’s statement.

She met Kris Kanaly of the Oklahoma Mural Syndicate through the coffee shop where she then worked. Her first mural was in Plaza Walls.

“That was crazy cool, because it was just like I do on canvas. I applied the same process. I used the spray rig and experimented with spray paint on that one. Then I moved over to the El Reno wall, it has been for a good five years or something, maybe not that long, but close to that, so I’d really changed or evolved or something. And again, it was not preconceived then the same thing happened and, in the end, there’s a painting,” she said.

Jones is still debating whether she’ll take a spontaneous approach or will plan out her Sunny Dayz mural. She’s considering a painting in the style of her hand motif series. Her acts of creation mirror those of many creation myths.

“In the beginning, there was nothing. Something emerges. It needs something to relate to. That happens and that creates relationships which feeds a reaction and the universe is formed. And I feel like I kind of go into that place. I have my paints and then there’s the blank canvas, which is the void and I just start creating this cosmic fabric and moving it around and these vocabularies happen, a story comes out and of its own little universe. Each one’s different,” Jones said.

Josephine P. Morrison Lans has had a 20-year career in art in Oklahoma. After going to college in Kansas City and living in Australia, she returned to local art in 2015. She also was one of the artists involved in the first Ahha installation in Tulsa during 2018.

“Everyone finds that thing that just grabs them, and it grabbed me. It’s a horrible sort of cliche to say all children do art and I just kind of kept doing it, but that’s true,” Lans said. “My grandmother was an artist. So I had a very rich, very rich environment in which to see art regularly. But when we went on a trip to Santa Fe, going in and out of galleries all day with my parents, I realized that that was a viable option for life and I have not turned away from that since.”

She has painted several indoor murals leading up to Sunny Dayz, so she applied.

“I’m preparing by doing smaller mock ups of what I plan to do for my wall space, which is four by eight feet. And I’ll probably be painting in acrylic. I’m not as experienced with spray paint, so I’m going to stick with the devil I know … For a mural, it’s pretty modest. But I am relieved. I’ve not done anything outdoors before and it is happening in the first week of August, so I’m glad it’s not much bigger than that,” she said.

Based in Tulsa, Lans will also be doing a print series with Flash Flood Prints in September and an upcoming group show in Albuquerque. She spent the pandemic making art, so there will be many new pieces to be exhibited in the near future.

“I take a lot of inspiration just from my own interactions with the world, so I think a lot about how I internalize experiences and what that means in regards to the human condition. Right now, I’m making a lot of work about my womanhood and my motherhood. I have a four year old. Since he’s been born, thinking about how that fits into my individuality and either builds it up or negates it. That’s a really interesting thing for me to play around with in my mind, and then with visual symbols,” she said.