Sunnyside Diner has added two new locations in 2018, with a third in the works. 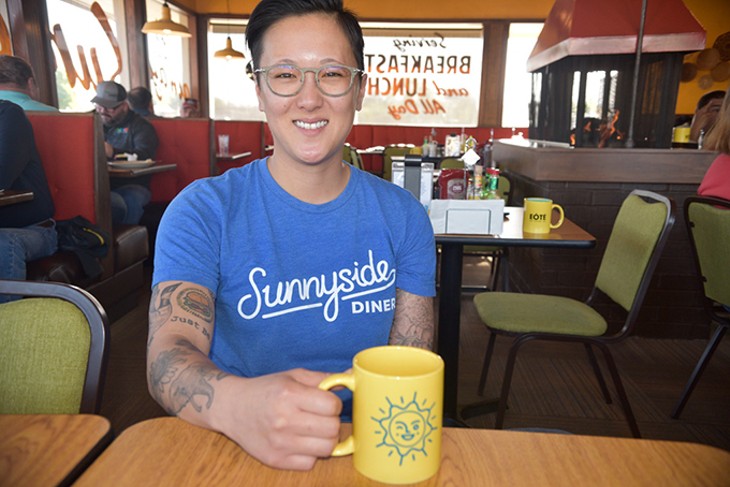 For generations, all-day breakfast was confined to local diners and mid-tier chains like IHOP, but over the last decade, dedicated breakfast restaurants became more popular, and not just for weekend brunch.

A study from the NPD Group, a food and consulting research firm, announced that breakfast is the only one of the three meals that saw growth in traffic for the year ending in March 2017.

The standalone breakfast concepts in Oklahoma City have certainly followed national trends. Sunnyside Diner opened its first location in 2016, helping revitalize a part of Midtown that has since added ¡Revolución! as a neighbor. Sunnyside moved forward into the standalone breakfast concept along with Neighborhood JA.M. and Hatch, both of which opened second locations in 2018.

Sunnyside Diner is the brainchild of Shannon Roper (the S in S&B’s Burger Joint) and Aly Cunningham (formerly Branstetter) who operate Happy Plate Concepts, which includes the original S&B location at NW 59th Street and May Avenue (Roper manages the other S&B locations as part of a separate ownership group) and a growing portfolio of Sunnyside Diner locations.

“As far as OKC goes, we were at the beginning of the breakfast scene as it was taking off,” Cunningham said. “We felt the trend happening, and in the rest of the U.S., it was already a hit. Breakfast is appealing to the staff because you can work a long shift and still be out of here by 4 p.m. In the restaurant world, that didn’t exist.”

The second Sunnyside Diner location opened at 824 SW 89th St. in February, a third location at 9148 N. MacArthur Blvd. held its soft opening April 26 and a fourth location in Edmond is in its initial stages of development.

The south side diner is located in a former A&W Root Beer stand that has been a Swadley’s Bar-B-Q and a Jim’s Famous Chicken, in addition to a few other eateries over the years. Roper is his own lead contractor overseeing renovation, but those used to the Midtown Sunnyside’s midcentury decor will be surprised with every new location.

Roper and Cunningham designed the diner based on community vibe. Since they were taking over a building dating to the 1970s and keeping its original fireplace in the center of the restaurant, they went with era-specific wood paneling, bright oranges and brown.

The recently opened Sunnyside near the intersection of N. MacArthur Boulevard and Britton Road is located in the old Lola’s Kitchen. Building off a theme that ties into the restaurant location near Lake Hefner, Roper and Cunningham gave it more of a 1980s feel — complete with neon triangles — and plenty of natural light to give it a lakeside vibe, Cunningham said.

“We’ve had offers to go into fancy, brand-new shopping centers, but we want to restore the community. We don’t just want to drop something in and say ‘Everyone can fit how we do it,’” she said. 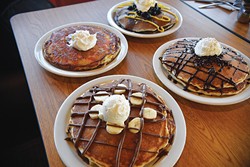 Using the restaurant as community outreach is an important element of Sunnyside’s mission, Cunningham said. At the original Sunnyside, they geared programs toward neighborhood homeless, some of which were pushed out of dwellings due to the diner’s opening. They started a community closet where those in need could grab a coat or scarf.

“It developed in Midtown, where it was scary to be there past 5 p.m. for so many years,” Cunningham said. “Nobody went over there in the middle of the day even. We don’t just want to push the homeless people out even further. They’re a part of the community too.”

Sunnyside manager Stacey Yarbrough started a Sunnyside Street Team that arranges bimonthly care packages full of food, toiletries and clothing. Yarbrough started the program on her own, saving $10 from each paycheck. She was inspired to help the community after spending four years in prison, Cunningham said.

“[Yarbrough] got a job at the diner as dishwasher and has worked her way up, and through the last few years, she’s been the most loyal person I’ve ever met,” Cunningham said. “Stacey wanted to give back to the community that gave her a chance to start over.”

Sunnyside has a food pantry at both of its new locations for people to use, if needed. There is also a pennant wreath just beyond the entryway where guests can take a voucher for a free meal. Funds for the wreath are compiled from guest donations where they are asked to pay it forward.

“If you’re in the restaurant world to make money, then you’re in the wrong business,” Cunningham said. “We’re still growing and developing [community outreach]. There is a homeless community near our second location, and we direct them here to use the pantry.”

The expansion in Sunnyside locations has also led to a larger menu. Three breakfast burritos and two gourmet toasts, including the now-popular avocado variety, have been added. Its varieties of pancakes are bolstered by the standout pineapple upside-down cake pancakes that are caramelized with sugar on the flattop for a crispy edge, grilled with pineapple and cherries and topped with a pineapple cherry sauce.

The Edmond location is tentatively scheduled to open in October, and it is only the beginning of Happy Plate Concepts’ expansion.

“We just talked about a five-year plan, and I’m so excited; it is going to be good for Oklahoma City,” Cunningham said.