EmiSunshine and The Rain plays at Rodeo Opry the day after the release of a new album.

EmiSunshine and The Rain

The girl was 9 years old, but the song she sang was 75 years older. A YouTube video of young EmiSunshine singing Jimmie Rodgers’ “Blue Yodel No. 6” in a flea market in Sweetwater, Tennessee, became popular enough to land her a spot on the Today show, where the hosts called her “spunky” and marveled that she preferred Dolly Parton to Miley Cyrus. That was more than five years ago — half a lifetime, during which EmiSunshine has performed at the Grand Ole Opry and shared a stage with Loretta Lynn.

“I’ve grown as a person, and that’s what you’re supposed to do,” EmiSunshine said. “I’ve gotten smarter, and I’ve worked a little bit harder over the years, and I’ve come into myself as a person. And that’s what I think is really important. I’m not really the little 9-year-old girl playing at a flea market in pigtails anymore. I mean, I’m growing up and I’m becoming my own person, and that’s a good thing. I have changed a little bit, and my perspective has.”

EmiSunshine and The Rain plays 7 p.m. Oct. 19 at Rodeo Opry, 2221 Exchange Ave. Her latest album, Family Wars, will be released the day before. The title track laments, “Sister’s out here living in sin / Grandma’s on the dope again / No one speaks to Daddy anymore / Mama can’t get off the couch / Her heart’s too broke and she’s wore out / At 44.” Considering she has been writing songs with her mother for a decade and The Rain features her father Randall Hamilton on bass, brother John Hamilton on guitar and “Uncle” Bobby Hill on drums, the song might be a little awkward to play if it were based on her real family history, but like the singer’s many murder ballads, the inspiration comes from “other people’s lives.”

“It’s not really from my family,” EmiSunshine said. “I write about a lot of things that I’m passionate about and my views and my opinions on things in this world. I think that my family supports me very, very much.”

She began writing songs seriously at the age many children learn the alphabet.

“I'm not really the little 9-year-old
girl playing at a flea market in
pigtails anymore.”
— EmiSunshine tweet this

“My mom and I, we started writing songs when I was itty-bitty, like little kids songs, and then when I was 5, I decided that I wanted to write a real song,” EmiSunshine said. “I started writing a song called ‘My Time to Fly,’ and my mom, she helped me a little bit with it. She kind of let me take the lead on that song. I wanted to write a gospel song because my grandmother was a singer, and so was my great-grandmother and my dad and my uncles and cousins and everybody in between, really. So I was very influenced by them because they had a gospel group that they sung in, and they went all around the United States. I just really wanted to keep their memory alive through that.”

Since then, she said, her songwriting has evolved and “blossomed out.” Family Wars’ “Jonas Black” adopts the perspective of the mother of the title character, a man killed in the September 11 attack. “It’s happened before, it will happen again / another nightmare is just around the bend,” the song says. “Scarecrow” tells of an abusive husband whose “body lies at the bottom of a well” after his wife gets hold of a shotgun. “The Ghost of Hank Williams” haunts its “heartsick and lonely” singer. “Same Boat” warns, “The bough’s about to break and the sails are torn in two / And waves crashing down on you are crashing on me, too.”

“I write in a way that it can relate to just about anyone,” EmiSunshine said. “I mean, I want to write for other people’s interpretation of my song. I don’t want it to be mostly all about me and what I think. I want to make it where it appeals to me, where it could appeal to my fans. It can appeal to anyone, and they can interpret it in their own way. That’s what I love about writing.”

“Meanwhile in America” compares life in the U.S. to that in Afghanistan and Mexico and asks, “Why should I complain about anything?” The title track for 2016’s American Dream, which reminds listeners to “think of all of these people whose American Dream was a lie” drew some criticism from listeners, but in a Facebook post, EmiSunshine said, “I knew when I wrote it people might think that it was too harsh! But I’m not too worried about it. I didn’t write it to be political I wrote it because of my Papaw who was injured at a local steam plant and who has had it so rough that it tore my poor mama apart! And I wrote it because of a lot of people I know that lost their American dream so it didn’t matter to me if people don’t like it! All that matters to me is if my Papaw is honored by it!”

EmiSunshine said the perspective in both songs is similar.

“My views on a lot of things really didn’t change,” EmiSunshine said. “It’s talking about a lot of subjects that people don’t really want to talk about very much from what I’ve seen, and I just wanted to say be thankful for what we have. Things might be a little bit messed up every now and then, but I think that we as a society need to be more thankful for the things that we have.”

Family Wars’ “Politicians Dance” laments, “We close our eyes and never glance while leaders fail to make a stand / The world looks out with blinders on, mailboxes filled by Amazon / While kids like us do what we’re told, greed and lust fill empty holes.” All EmiSunshine would say about the song is it sounds different because she wrote it on the guitar instead of the ukulele. 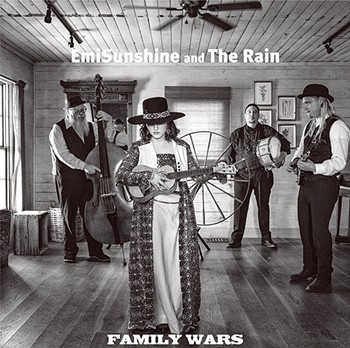 “I’ll leave that one open for interpretation in your own way,” EmiSunshine said. “I don’t really want to go into that one as much.”

Features written about EmiSunshine often call her an “old soul.”

“I hear it a lot, but I mean, I grew up like an only child, and I’m homeschooled, so I guess I took time to be around adults more, and I guess that might have something to do with it,” EmiSunshine said. “I really don’t know. I’m just me. … I used to be very uncomfortable around kids my own age, but then I realized they’re just as uncomfortable as I am around them. They really are. You just find your people. I get along with adults. I get along with kids. I think that really what it is for me was just I was very intimidated in a way. I don’t know why I wasn’t intimidated by adults when I was younger. I was intimidated about kids my age, a little bit older. As I’ve gotten older, I’ve been able to find people that are very, very kind and are good friends my age that don’t scare me.”

While much attention has been paid to EmiSunshine’s haunting ballads, she also likes to write “ridiculous, silly songs” in her “free time.”

“I don’t really write a lot about those things,” EmiSunshine said. “I do it every now and then for fun, but it’s not really what I’m trying to put out in the world. It’s not something that I feel is as needed out in the world. I want to write about things that can be beneficial to people, society. I want this album to be something where [people say] ‘Oh, I need to think about that more. I need to think about this topic more.’ That’s pretty much what I’m trying to do.”