“Inside, they’ve completely outfitted this thing with this fancy interior, where you do an actual escape room,” said BC Phillips, SUPER! BitCon cofounder. 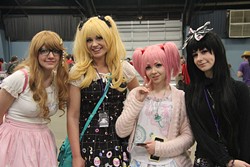 This year’s expo brings a slew of new entertainment options along with usual event fare. The Escape OKC, a live escape game where people in a room must solve puzzles and questions to break out, is recreated in a semitrailer for this event.

“Inside, they’ve completely outfitted this thing with this fancy interior, where you do an actual escape room,” said BC Phillips, SUPER! BitCon cofounder.

Similarly, mobile gaming party bus All About Gaming loads up playable PlayStation 4 and Xbox One consoles. It will be parked inside the expo center.

This year’s guests are Phil Moore, known as the host of early ’90s Nickelodeon game show Nick Arcade, and Mark Turmell, designer and programmer for arcade hit NBA Jam. Both will participate in live interviews in what are being called Fireside Chats.

One big change to this year’s event is the convention passport, Phillips said.

“This year, the badge is the ID that says you paid, but it’s also your convention passport,” he said. “You can take your badge around to various parts of the convention, and our volunteers will punch-card your badge as you’re engaging in different elements of the events.”

A properly punched passport could win one guest a prize package worth $500. Volunteers also will place stickers on badges for participation in the event’s game show.

“We tried to maximize the badge as much as we can,” Phillips said.

Part of the reason SUPER! BitCon’s popularity grew so quickly is that it breaks the basement-dwelling gamer stereotype.

“What we realized with this event is that it inspires everybody to come out of their shell and be a part of a greater celebration,” Phillips said. “Now everyone is a gamer. Even grandma plays Bejeweled. There shouldn’t be negativity about the type of person who plays a game.”

Tickets will be on sale at the event. Teens and adults cost $10; youth ages 5-12 are $5; and children under age 5, seniors over age 60 and active military and veterans with ID are free.

Admission passports also come with two coupons for 20 percent off purchases at Got Games in Del City and ThrillHouse Games in Tulsa.

A SUPER! BitCon pre-party is 7 p.m. March 31 at Dave & Buster’s, 5501 N. May Ave. Admission is free and open to the public. The party features live music, giveaways such as free SUPER! BitCon entry and a VIP package with a custom, playable Super Nintendo game featuring the expo’s mascot as the protagonist.