Super Diamond is no cover-playing party band. For frontman Randy Cordeiro, it’s a lifelong passion that honors a living legend 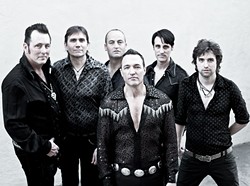 As the calendar rolled into the new year, Neil Diamond spent December 1978 celebrating his return to the top spot on the Billboard Hot 100 with his Barbra Streisand duet “You Don’t Bring Me Flowers.”

As much as he loves the musician, Cordeiro said he is not an impersonator. Super Diamond, which formed in 1993, does not settle for playing the Brooklyn songwriter’s hits as-is. Occasionally, even a Led Zeppelin riff sneaks into his set.

“We like to make it a little heavier, a little alternative, a little more hard rock, a little more psychedelic,” Cordeiro said. “A lot of the other bands we grew up liking, we like to kind of put those influences into the way we play Neil Diamond songs, so we don’t just do the songs straight up.”

There was a time, however, when the singer was seen by some as less than cool. Cordeiro said that the release of the single “Heartlight,” inspired by E.T. the Extra-Terrestrial, was not quite rock ’n’ roll.

“He was wearing a lot of sequin shirts; people seemed to be making fun of that,” he said. “He seemed to have a lounge aura going on at that time in the early ’80s, so there was a backlash to his success.”

As with many other artists, Diamond’s musical reputation recovered as he took a break from the spotlight.

Cordeiro said part of the reason he started performing Diamond’s hits was because, unlike cover mainstays like The Beatles and The Rolling Stones, songs like “Cracklin’ Rosie” were not performed by many people. He became hooked on performing the musician’s songs after he saw how people reacted to the music.

“It was just a really exciting discovery, just seeing Neil Diamond songs were making a lot of people happy, and still [do],” he said.

The band has played with Diamond himself twice. The singer also called Super Diamond his “adopted children” in a Today interview with Katie Couric.

Despite a slate of tribute shows dating back almost 23 years, Cordeiro says he never tires of honoring his first music hero.

“There’s such a variety of types of songs,” he said. “There’s three-chord rock ’n’ roll songs like ‘Cherry, Cherry’ and then there’s really complicated songs like ‘Love on the Rocks’ that have chords I’ve never played before.”