Super Tortas El Chavo lives up to its namesake with giant sandwiches that pack flavor into each layer of meat.

For many Spanish speakers across the world, one of the most recognizable characters is El Chavo, from the uber-popular sitcom El Chavo del Ocho and subsequent spinoffs, including an animated series that began in the mid-2000s.

Take a trip down SW 29th Street near Western Avenue and the bright colors of the animated characters from El Chavo greet guests at Super Tortas El Chavo, 721 SW 29th St. There are more odes to El Chavo characters in the interior of the bright and clean restaurant.

Founded by the Trejo family under patriarch Agustin in 2008, Super Tortas is its second restaurant, following Taquería Cárdena’s, 1233 SW 29th St., which stays open until 4 a.m. on the weekend to service the need for late-night tacos following a house party or a night at the club.

As you can infer from the name, tortas are the focus at Super Tortas, and they really live up to the name. The restaurant offers nearly 30 types of sandwiches, each of which is large enough to feed at least two people. The soft bolillo bread is similar in texture to a baguette but is served in a round shape topped with sesame seeds and grilled on a flattop.

“We try to make everything as authentic as possible,” said Jose Trejo, Agustin’s son. “The recipes are from my dad’s mom and other grandparents. A lot of the seasonings and ingredients come from Mexico. A lot of people, when they come [here], expect Tex-Mex, and they find something different. Sometimes they are scared to try it, but once they do, they’re definitely coming back.” 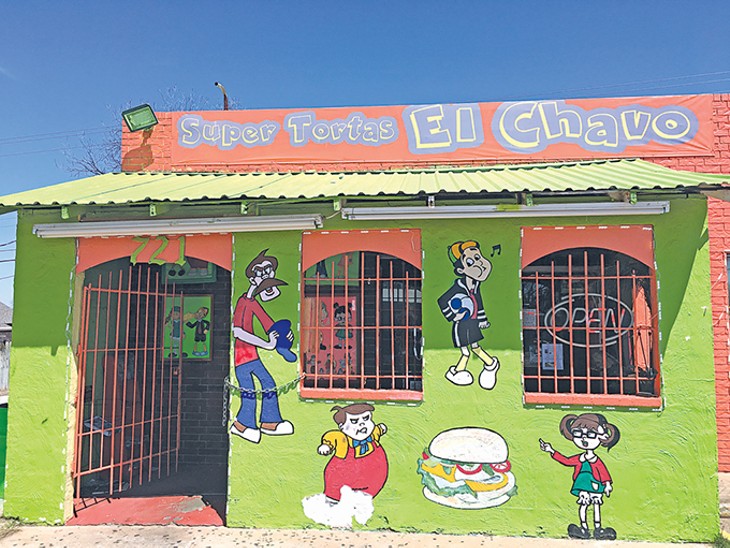 It’s easy to miss Super Tortas El Chavo when traveling east on 29th Street because it’s hidden from view by another building until you’re right up on it, but have no fear — it is worth the trip, and you might want to fast before going because the portions are generous.

A friendly wait staff greets customers in either English or Spanish, depending on your preferred tongue, and the meal begins with standard fresh chips and salsa, but I wasn’t expecting the nice surprise of a complimentary daily fideo soup. A chicken-and-tomato broth is served with vegetables and a noodle that changes each day. My version had vermicelli, and I liked the soup as almost an amuse-bouche of brightness before a heavy meal.

The hardest part of the meal is the selection. With so many different sandwiches, how do you choose? I consulted with the waitress, who said the Cubana is one of El Chavo’s most popular sandwiches. It’s a Mexican ode to the popular Cuban that features steak, chorizo, ham, bacon and hot dog and cheese in the giant sandwich, in addition the dressing of avocado, lettuce, tomato, mayonnaise and a smear of refried beans. Grilled onions and jalapeños and carrots escabèche, in addition to bottled rojo and avocado crème sauces, allow guests to kick up their sandwiches.

Other popular tortas include the Acapulqueña, which has both a tilapia filet and shrimp for a seafood party. Some sandwiches include nopales (grilled cactus), and there is also a fried turkey tail torta.

At $8.50, a torta is a steal of a price because it can easily feed two people. The sheer amount of meat on the sandwich is enough to give me meat sweats just thinking about it. Each cut of meat blends well with the fresh bread that has a crunchy outside and soft interior.

I split a torta with a dining partner, ordered a side of french fries and also ordered three tacos: two al pastor and one steak. The fries were my favorite kind of cut, sitting in the perfect medium between steak-cut and shoestring, but they were under-fried. They arrived with a texture more like a baked potato. I saved them in a box with nearly half of the torta that my dining partner tapped out on after five or six bites.

“This is so good, but I’m already full,” they said, preferring to go for a second taco rather than continuing the good fight against the behemoth of a sandwich.

I refried the french fries at home for three minutes and topped them with salt, garlic powder and fresh cracked pepper for a fantastic evening snack. It’s a common misconception that fries can’t be saved — just don’t reheat them in a microwave.

The tacos were very good. The steak was tender yet crispy, and the al pastor packed plenty of chili flavor on top of corn tortillas that had a crisp char from the flattop. It makes me want to try their tacos at Cárdena’s, where the selection increases by at least twofold.

If you think the regular torta isn’t big enough for you, Super Tortas offers a $25 “mega hamburger planchet,” and if one person finishes it by themselves, it is on the house (no time limit required). Jose Trejo said it gets ordered about once every other day, but it’s usually split between two people. It should certainly vault to the top of Oklahoma City food challenges for anyone looking to tackle it alone.

Super Tortas El Chavo is a must-visit for anyone looking to try regional Mexican specialties or those looking to engage in a marathon meal that stretches your stomach capacity.

What works: The meat in the tortas and tacos is flavorful and tender.

What needs work: The fries needed to be refried for crispiness.

Tip: One torta is big enough for two people.