Josh Abbott had a full day ahead.

“I’m on dad duty right now,” Abbott said toward the end of our phone interview. “I just finished grocery shopping … and now I have to unload the groceries, which is the worst part of buying groceries.”

“There’s no sadness in those songs,” Abbott said. “[‘Catching Fire’] is song of redemption. It’s a song of survival. It’s a song of putting away your demons and becoming a better version of yourself.’”

On the EP’s title track, Abbott sings about the “road to resurrection” and standing up to “restless midnight demons.” On 2015 concept album Front Row Seat — which Rolling Stone said “goes out on a limb in a way country hasn’t seen in decades” — Abbott, who got divorced in 2014, sang in intimate detail about a relationship from its early romance to its painful dissolution. On “Ain’t My Daddy’s Town,” a standout track from 2017’s Until My Voice Goes Out, Abbott, whose father died during the album’s recording, sings “This ain’t my daddy’s town no more / Somebody’s got to fill those boots he wore / And I ain’t saying I’m the man he was / But it’s my turn to carry on what he loved.”

“We always write about what we know, and what I know is my own life,” Abbott said. “There’s been ups and downs, like everybody in life, and I think right now … I’m happily married; we have a beautiful baby girl, and I’m very fortunate to get to do this for a living. So I think when you consider all those things together, it’s a very nice time in life.”

While Abbott is in a different headspace than he was when he recorded some of the band’s previous material, he understands those songs have taken on a significance outside his own life.

“You kind of have to play the old stuff because that’s what fans want to hear, but I do think you sing them and perform them from a different perspective,” Abbott said. “At the time, back in the day, I used to sing songs about other girls that I had dated in college or whatever and breaking up and that whole thing and how the world is ending and you’re so sad and all that. It’s funny because now I still sing those songs, but I don’t sing them, I guess, with the same personal intent and passion. I sing them for the fans, and a lot of times I’ll let them sing a chorus by themselves. That’s the way I kind of look at music is when I write a song, I’m writing it for me, usually, or my wife or whoever, and whenever I put that song out on an album, it’s now kind of public domain, right? The song’s not really mine anymore because I’ve chosen to share this song with other people in hopes that their similar experiences in life will make the song and the lyrics relatable enough to seem and feel real. Once we put a song out, to me, it’s everyone else’s, and it’s just my job now to perform it for them.”

“Sometimes you just need
to go to bar and catch a buzz with your
friends and not take it so seriously.”
—Josh Abbott tweet this

In addition to the title track, which closes the album, Catching Fire also includes opener “Little More You,” which Abbott describes as “just a really sweet love song,” and self-explanatory “Oughta Get Drunk.”

“We’re all stressed out, all this political bullshit,” Abbott said. “There’s just stuff every day that’s just nonsense, and sometimes you just need to go to bar and catch a buzz with your friends and not take it so seriously.”

Abbott said “Surprise Surprise” is “one of the most autobiographical songs” the band has released.

“The first verse really encompasses how our band got started, and the second verse kind of alludes to my previous marriage, my current marriage and the difference between the two,” Abbott said. “Then the bridge basically says, ‘We’re having a kid.’ It’s like, ‘Wow! This song really encompasses the last 18 years of my life’ — maybe not that long. I’d say 15 years. I’m not that old. … I think fans who have followed us and are familiar with our story and mine along the way, I think that they appreciate that song, and it’s fun for them to be able to sing a song about something they kind of already know.” 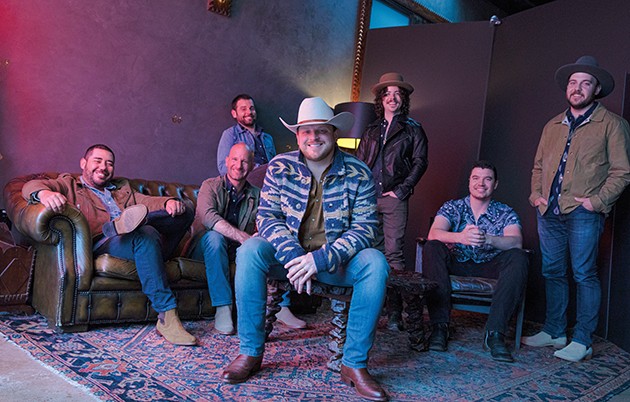 Since its founding in 2006, the band has faced difficulties not included in the song — most publicly, witnessing the Mandalay Bay Las Vegas mass shooting in 2017, where 58 people were killed and 500 more wounded at the Route 91 Harvest country music festival about six hours after the band left the stage. Abbott had gone back to his hotel room before the shooting started, but guitarist Caleb Keeter, who was on the concert grounds at the time, made headlines afterward for writing an essay calling for gun control declaring, “Enough is enough.”

Moving forward, Abbott said the band is focusing on the present’s many positives and the future’s possibilities rather than dwelling on past sadness.

In  Abbott’s present reality, writing and singing sad songs would be disingenuous.

“I think it’s important as you grow up and go down the line to continue writing songs that reflect your current spot in life,” Abbott said. “There’s no point in me writing a song about breakup, heartache, sadness, divorce because that’s just not where I’m at in life. I don’t want to fucking sing about those things, and a lot of fans don’t want to sing about that. … Our genre of music is built on the honkytonks. We’re very fortunate that we get to play some really big arenas and venues at times, but for the most part, we’re playing a bunch of honkytonks and bars. People don’t go there to get some deep religious or sad song experience. They’re not there in a theater to sit down and listen to sad stuff. That’s not who we are, and that’s not the fans we’ve curated over the last decade. We are a band that emphasizes having a good time and falling in love, and that’s what we try to write and sing about.”