Carpenter Square Theatre’s production of The Library finds cruelty and catharsis in the aftermath of a school shooting. 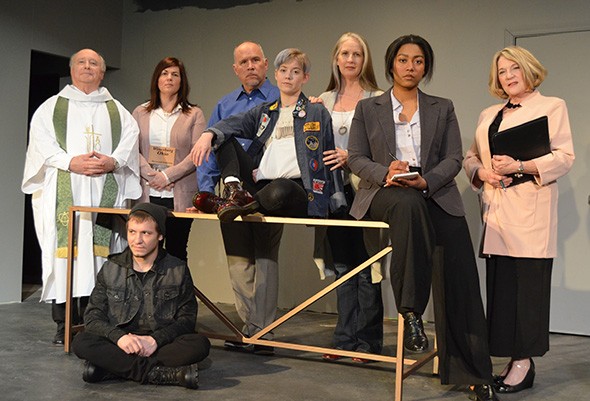 The Library opens with a 16-year-old high school student being rolled into an emergency room.

“Riddled with fragments,” says the nurse.

“Multiples shotgun blasts to chest and abdomen,” the surgeon replies.

The play, which runs Friday-March 14 at Carpenter Square Theatre, 800 W. Main St., is not so much about a mass shooting as what happens afterward.

“It really focuses in on the people who survive the shooting,” said director Terry Veal. “Whether they were there or whether they’ve lost someone during the shooting, and how it affects them. A lot of stories, it’s all about the shooter and why he did what he did. This is more the effect it has on the people who were involved, and how it changes their lives. Do we stay still, or are we able to move forward? … God knows, it’s not easy.”

Caitlin (played by Sara Byerly), unlike 11 of her classmates, survives the school shooting, but rumors, irresponsible news reporting and hidden ulterior motives lead to accusations that she helped the shooter. Playwright Scott Z. Burns partially based The Library, which debuted in 2014, on the 1999 Columbine shooting, but Caitlin and her family might relate to the survivors of the Sandy Hook and Stoneman Douglas shootings, who have faced harsh social media attacks perpetuated by conspiracy theories and social media trolls.

“Burns is brave in showing how disaster brings out the pettiness in people, in addition to more heroic traits,” wrote critic Ben Brantley in The New York Times. “And he’s right to question the facile abuse of words like ‘healing’ and ‘closure.’”

In Caitlin’s case, following accusations about her relationship with the shooter and her actions during the shooting, even her classmates and community begin to doubt her version of events.

“She’s ostracized by her friends at school,” said Carpenter Square artistic director Rhonda Clark. “They don’t want to have anything to do with her. They consider her a traitor, and the same with her parents in the community. They’re sort of losing friends over this while their marriage is in tatters already. The parents are already estranged, so this puts even more stress on their marriage. … It really examines what loss and stress does to people.”

Because the shooter dies in the attack, the community channels its helplessness and sadness into outrage at Caitlin.

“Everyone has a need for a solution — and someone to blame,” Clark said. “And if it’s not just the shooter, it sort of metastasizes into other things. … It just kind of grows. People just need to an outlet for their hurt and their anger, and it just kind of comes out and in different ways. If the shooter is gone, which is usually the case in these kinds of shootings, then people just have a need to put their grief and their anger somewhere.”

“Do we stay still, or are we able to move forward? … God knows, it’s not easy.”
—Terry Veal tweet this

Veal said he wanted to cast Byerly in the role after seeing her performance as Mayella Ewell in Oklahoma Children’s Theatre’s production of Aaron Sorkin’s To Kill a Mockingbird. Broadway World’s Jessica Vanek praised Byerly’s “captivating” and “convincing” portrayal of Mayella “as both a victim and a villain.”

Veal, who taught high school for 20 years, said The Library feels true to the experience of modern high school students.

“I think it’s pretty true to what a young person would have to go through or deal with if something like that happens,” Veal said. “This young girl, she’s dealing with a lot, of course. She’s dealing with the shooting and then she’s dealing with the accusation that she’s not telling the truth. That’s a lot to put on a young kid. She’s 16, the character, so you can imagine what that would be like.”

Clark said the play is also critical of the media’s tendency to release stories before all the information is available.

“It’s really a cautionary tale about rumor and jumping to conclusions and social media and also the media — what you say to the media and how that may be construed, both from the victim’s standpoint,” Clark said. “It’s very, very timely, sadly. We continue to have these senseless shootings, and this comes at it from a really different perspective. … It really just, hopefully, makes everyone think when they hear something to think twice before jumping to conclusions and think twice before they treat someone badly.”

In The Library, Clark said, “nobody is blameless,” and “everyone’s a victim.”

“What I really like about it is it just comes at this issue from just about every perspective that you could possibly have,” Clark said.

While some people have expressed concern that the play might be depressing, Clark said she finds it cathartic.

“It really allows the characters on stage to experience these feelings and lets you just come inside, I think, in a very thoughtful way, what someone goes through when they have an experience like that,” Clark said.

Clark also noted that the play, which does not include guns or a depiction of the shooting itself, is being produced as part of Carpenter Square’s outreach program for high school students. A Q&A session with the director and actors will follow performances for students, and schools will have the opportunity to host drama workshops taught by representatives from the theater, where “any questions or any thing that the students might want to talk about, hopefully, will come out.”

The play asks the audience to consider multiple perspectives in an all-too-common tragedy, but Veal said it never tells the audience what to think.

“The key is to try to tell it honestly and let people go away with their own conclusions,” Veal said. “It shows different sides of the situation. I don’t want to preach to anybody, but I think it’s an important subject that needs to be discussed.”

Another key to staging the “very cinematic script,” Veal said, is “trying to keep it moving.”

Clark agreed, noting that Burns also wrote the screenplays for several films (including director Steven Soderbergh’s The Informant!, Side Effects and Contagion).

Veal said finding a way to move forward from tragedy is one of The Library’s main themes.