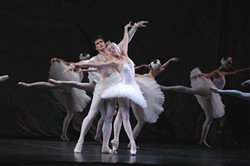 “It’s really a feast for the senses,” said Shane Granger, Armstrong Auditorium’s marketing director. “It’s a unique opportunity because you’re seeing an art form that was really perfected in Russia.”

Choreographed by French ballet master Marius Petipa, Swan Lake tells the tale of young Prince Siegfried, who falls in love with the swan queen, Odette, who has been bewitched and cursed by the wicked sorcerer Rotbart. Only true love can break the spell.

Founded as Soviet National Ballet in Moscow during the perestroika era of the late 1980s, Russian National Ballet Theatre incorporated graduates from the Russian choreography schools of Moscow, St. Petersburg and Perm. The company recruited top dancers from Russia, Latvia, Ukraine and Poland. Today, the company features 60 dancers, many of whom have been with the company since its inception, and is led by artistic director Elena Radchenko.

This will be the company’s third visit to the extravagant, $25 million Armstrong Auditorium, which opened in 2010. The auditorium features a 9-foot Hamburg Steinway concert grand piano, two 7-foot Baccarat crystal candelabra commissioned by the shah of Iran to celebrate the 2,500th anniversary of the Persian Empire and three 2-ton Swarovski-Strass crystal chandeliers hanging in the lobby. Granger said it seeks to provide Oklahomans with “monumental cultural experiences.”

Armstrong Auditorium is home to the Armstrong International Cultural Foundation’s performing arts series, now in its 17th season. The venue has hosted some of the world’s most renowned performing artists, including the Vienna Boys Choir, the Academy of St. Martin in the Fields and EGOT-winning composer Marvin Hamlisch, who died in 2012.

The Armstrong International Cultural Foundation is a nonprofit humanitarian organization sponsored by the Philadelphia Church of God, based in Edmond. The foundation also sponsors archaeological excavations in Israel, and the Armstrong Auditorium currently hosts an exhibit of ancient Jewish artifacts.

“It’s an opportunity to do good works and live through example,” Granger said of the foundation. “It all stems from the idea of ‘love your neighbor.’”

The foundation is “primarily financed,” by the Philadelphia Church of God, which Granger said subsidizes about 60 percent of the performing arts series’ budget. The other 40 percent comes from private donations and ticket sales. For more information, visit armstrongauditorium.org or call 285-1010.