Oklahoma City’s version of syrup. leans heavily on the sweet side of brunch.

More than just a place for good coffee and a sweet breakfast, syrup. is a for-profit restaurant that operates with a nonprofit mentality as its owners use proceeds from two locations to donate to local and international charities.

I first detailed the story of Ashley and Jason Kennedy last year prior to the opening of syrup. at 1501 NW 23rd  St. in Oklahoma City, which is a follow-up to the original syrup. location in Norman, and it has stuck with me ever since.

The Kennedys came up for the idea of syrup. while Jason Kennedy worked an internship with the South African Human Rights Commission before he finished law school at University of Oklahoma.

As college students on a tight budget, breakfast for dinner became a hit in the household. As they experimented with different waffle and pancake combinations, they got the idea for what would become the original syrup. in downtown Norman in 2012.

The Kennedys live in South Africa full-time, where they devote most of their time running various missionary projects through the Antioch Community Church. They do not take salaries from the restaurants, and net proceeds go to help missionary work in South Africa as well as community organizations in Oklahoma.

Syrup.’s philanthropic mission led me to want to check out its menu since it opened last September, but every time I’ve been in the mood, I’ve noticed lengthy lines during peak weekend brunch hours.

They do use the Nowait mobile phone application that allows users to get their names on the waiting list without physically being at the restaurant, and from the looks of online reviews, it’s been used with varying degrees of success.

Syrup.’s menu is essentially designed to be a hit during brunch, which has seemingly expanded from a weekend-only excursion to a way of life over the past decade.

Its menu leans heavily on the sweet side of breakfast, which makes sense given the name of the restaurant is syrup., but it skips right over brunch and dives straight into “bressert” with its red velvet waffle topped with vanilla ice cream and the waffle sundae. Considering the latest the restaurant stays open is 2 p.m., I’m surprised enough people order ice cream for breakfast to have two items with ice cream on the menu, but to each their own, I guess. 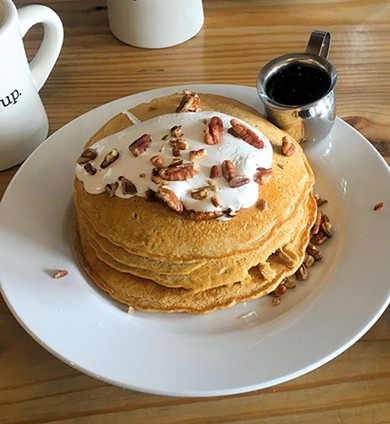 I probably lean to the savory side of brunch, but to be honest, syrup.’s savory options didn’t excite me as much as its sweet ones. Its savory options are limited to the Nompton ($9), which is a standard choice of bacon and eggs paired with pancakes (even those are topped in powdered sugar); biscuits and gravy (I read online that the gravy was made with a mix); eggs Benedict topped with bacon, avocado and tomato; a stuffed frittata; and huevos rancheros. Another table ordered the huevos rancheros during one of my two recent visits to syrup., and it did look very good as it was topped with a from-scratch ranchero sauce.

The Morning Glory is a Belgian-style waffle topped with scrambled eggs, bacon or sausage and cheddar cheese. It’s a dish I would’ve thought about ordering, but I’m going to have to be honest; I’ve become somewhat of a scrambled egg snob. Yes, I’m about to become ‘that guy.’

We’re all overcooking our scrambled eggs. I’ve heard a few interviews recently in which chefs like Alvin Cailan and David Chang advocated for serving scrambled eggs essentially over-easy. I was just as skeptical as you are right now until I had someone recommend Gordan Ramsay’s technique.

Add six eggs to a cold pan with 25 grams of cubed butter, stir and cook on medium-low heat until the eggs just begin to cook. Remove from the heat, fold the eggs for about 20 seconds with a rubber spatula, return to the heat until they start to clump and remove again. Add a little bit of crème fraiche, sour cream or Greek yogurt with some smoked paprika, salt and pepper. You’re looking for a loose clump of eggs that can be dumped on top of toast. The final result is extremely creamy but warm all the way through and will make you realize you’ve been eating scrambled eggs wrong all your life.

It skips right over brunch and dives straight into “bressert” with its red velvet waffle that is topped with vanilla ice cream. tweet this

Afraid of getting overcooked eggs, I focused my attention on two trips to syrup. to determine a favorite between its two sweet pancake varieties: the cinnamon roll that is complete with a cinnamon roll swirl and streusel topping and the Home Sweet Homa, which are sweet potato pancakes topped with marshmallow glaze and pecans.

The service at syrup. was good on both trips, and the coffee from Stump-town Coffee Roasters in Portland, Oregon, was top-notch. The restaurant is designed in a somewhat sparse, farmhouse chic style that makes it perfect for hipster-friendly Instagram posts.

The entrées I tried were solid, but I had some missteps on the sides. The home fries with the cinnamon roll pancakes were inconsistent, and some of the potatoes were cold. The bacon with the sweet potato pancakes was in some weird purgatory between been not crispy enough and too chewy.

Overall, I recommend syrup. if you’ve got a sweet tooth, especially at breakfast, but would look for other options if you’re craving something savory.

What works: The coffee is top-notch, and the sweet breakfast options are well-executed.

What needs work: The side options were neglected.

Tip: Use the mobile app Nowait to get on the waiting list during busy weekend brunch.