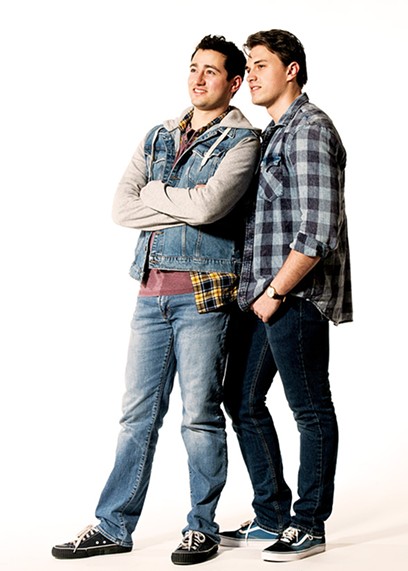 A power-pop album originally written about a musician’s divorce is the musical impetus behind a love story featuring two gay teens from flyover country in Girlfriend. The musical debuts Wednesday at Lyric at the Plaza.

Matthew Sweet’s alternative-rock album Girlfriend has been called one of the best albums of the 1990s, with insightful lyrics and powerful riffs. Writer Todd Almond, a fan of the album as a teenager, crafted the semi-autobiographical musical set in the early 1990s in Alliance, Nebraska.

In collaboration with Washington, D.C-area Signature Theatre, the production follows two recent high school graduates, Mike and Will, as they deal with summer love in a more secretive time. Director Matthew Gardiner is the associate artistic director of Signature Theatre, a recipient of the 2009 Regional Theatre Tony Award. His predecessor in that job, Michael Baron, is now the producing artistic director at Lyric Theatre of Oklahoma.

Baron saw the production of Girlfriend directed by Gardiner at Signature and decided to bring it to Lyric for its regional premiere.

“The piece is one that I have really admired for a while, and the story is one that is actually rarely told,” Gardiner said.

“So few of our love stories are actually shown onstage,” Gardiner said. “To have a story that is just purely a love story between two boys growing up in the Midwest is a story that I don’t see often onstage and a story that I wanted to tell.”

Many young gay people in the 1990s, and in this story in particular, were afraid to reveal their feelings completely. Mike and Will instead share a mixtape of songs that hint at what’s in their hearts.

“I thought it was really cool to show how they are trying to put across all of these feelings in a sideways way,” Sweet told Los Angeles Times.

The furtiveness was often necessary.

There weren’t many pop-culture role models for gay teens of that age at that time, Gardiner said. Often-aimless Will thinks he’s the only gay person in Nebraska — maybe even the world. Mike, meanwhile, a college-bound jock, struggles with sexuality and his relationship with his girlfriend.

“It tells very specifically the story of two boys falling in love in the ’90s. It was a time before the internet and a time before there were any real gay celebrities or icons or musicians that were ‘out’ in the way they might be today,” Gardiner said. “The boys are left with the CDs that they have or the music that they have, and I think what’s beautiful about it is that they’re able to take this music and place themselves inside of it.”

Girlfriend opens Wednesday at Lyric at the Plaza, 1725 NW 16 St., on the theater’s Paula Stover Stage. It features an all-female rock band playing the music of Matthew Sweet. The musical features nine songs from Girlfriend, one from Altered Beast and two from 100% Fun.

“Not a word or a lyric of the songs was changed when Todd Almond put it into the play,” Gardiner said. “And I think that speaks to how universal Matthew Sweet’s music really is.”

In an interview with The Washington Post, Sweet said he liked how his music could be adapted to different relationships.

“When I read Todd’s script about two young guys falling in love, that seemed fresh,” Sweet told WaPo. “My best friend growing up was gay, and I liked that the album could be taken as speaking to any kind of relationship. To take this album, which was about real personal things for me, and make it work for these two other kids was so cool.”

Gardiner said he recognized adopting films and other stories and reframing them to reflect one’s own experiences.

“It’s interesting and sort of strange that Todd Almond picked this album to be about a gay love story, but I think about what films I connected with when I was in high school,” Gardiner said. “I had to sort of place myself into these straight heterosexual stories in order to feel like I was connecting or understanding where these characters were coming from. And I think that is a very normal occurrence when you don’t see yourself represented in art and in film and in music and so you sort of have to make the connection in a roundabout way.”

Jimmy Mavrikes is making his Lyric Theatre debut as Will, a role he also played at Signature.

Mavrikes was recently honored with a nomination from theatreWashington for its Helen Hayes Awards. Mavrikes’ nomination for outstanding lead actor was one of eight nominations for Girlfriend, which also received nods for direction from Gardiner and Outstanding Production in a Musical.

Ian Marcontell will return to Lyric to play the role of Mike. Marcontell portrayed Sky in Lyric’s 2018 Summer at the Civic production of Mamma Mia!

“Representation matters, whether that’s sexual orientation or diversity or trying to tell as many stories as possible from as many viewpoints as possible,” Gardiner said. “And that’s why it was important to me to share this story, and I know for a fact that it affected many young people in an important way.”

Gardiner said he heard from many teens and others who were moved by his presentation of Girlfriend at Signature.

“It seems silly because musical theater has always been so linked to the LGBTQ experience, but at the same time, we don’t really see a ton of stories that are representative of our experiences,” Gardiner said.

While the piece has conflict, Gardiner said Girlfriend is ultimately an uplifting tale. And while stories that focus on the gay experience like Angels in America or The Laramie Project are important stories, for young gay people, it can be terrifying.

“As a young person would, I feel like I would have been more ready to … see myself in that story,” Gardiner said, referencing Girlfriend and also the recent film Love, Simon. “That doesn’t make those stories have any less value, but there’s also value in a story that really celebrates what it means to be gay and to find what makes us more alike than different.”