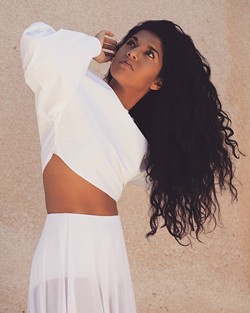 A war brews inside each of us. At least that is the way Sigmund Freud saw it.

Trish Hosein, in all her artistic and metaphysical duplicity, might subscribe to the famous Austrian neurologist’s psychoanalytic theory on personality.

Hosein is an eclectic synth- and art-pop vocalist from California who performs as Trishes.

She is one of the first crop of national artists in Tower Theatre’s Studio Series, intimate concerts that each begin with a question-and-answer session with a local music artist. The event starts 8 p.m. June 1 at Tower Theatre Studio, 425 NW 23rd St., with an interview by local synth-pop performer Lincka. Music begins at 8:30 p.m. Space is limited, and tickets are sold on a first-come, first-served basis.

Combine the self-aware songwriting of Fiona Apple, the angelic voice and avant-garde flair of FKA Twigs and the creative technical ability of Reggie Watts and the result is something very close to Trishes.

Listening to her music, it doesn’t take long to notice a lush, layered vocal style made possible through the solo artist’s mastery of pedal looping — a technique in which musicians and artists record a sound in any moment for later playback and texturing.

Hosein sometimes harmonizes alongside a chorus of herself. She said the technique was not something she consciously developed, but in some ways, Hosein’s sonic hall of mirrors came to represent the emotional and intellectual tug-of-war inside her.

A few years ago, Hosein was a recent graduate of Boston’s Berklee College of Music when she started developing what would become her Trishes project. Her life seemed great on paper. No outside troubles directly affected her, but still, Hosein felt conflicted.

Her life was at peace, but her brain and heart were locked in combat.

“I was trying to figure out what morality is and what I learned from society and from my family growing up — what I was going to keep and what I was going to discard from that,” Hosein said during a recent Oklahoma Gazette interview. “It was a weirdly difficult time for not having many external pressures on me.”

Basically, everyone has a personality composed of three core components: the id, or one’s instinctual and primal self; the ego, or the conscious, decision-making self; and the superego, or the intellectual, higher self.

The id and superego are constantly clashing, and that conflict is outwardly expressed by the ego.

The more Hosein learned about Freud’s theory and how it applied to her, the more she began to connect with the looping style she experimented with. She began calling her new project Trishes because the varying vocal tones and effects started to sound like the manifestation of her inner struggles. Her music gave her an outlet to explore these feelings.

“A lot of my stuff is just me throwing a tantrum, and I can’t do that in real life,” she said. “I think we all have those tendencies and inclinations and it’s just the best way for me to express that.”

Hosein’s family is from Trinidad, and before moving to California, she spent the first six years of her life on the small island off the South American coast.

Though she has long harbored an interest in music, Hosein’s father was an electrical engineer and her mother was a nurse — she was raised in a non-musical household.

She credits her fascination with music to her attendance at a public performing arts high school and a love for indie-pop singer-songwriter and pianist Regina Spektor.

“[Spektor] just opened up my mind to how my voice could be used — metaphorically and physically — or how songs could be written in ways other people weren’t writing songs,” Hosein said. “She basically showed me there is a way of doing things outside of how most people are doing them, and that was invaluable.”

Hosein later decided to hone her passion at Berklee. She said her parents were happy that she was going to college, but they needed some convincing about choosing music as a career.

“Your parents just want you to be happy and secure — it’s not a secure industry,” she said. “Once they realized that I was sure this is what I wanted to do, they were supportive, for sure.”

In college, Hosein was a Spektor-modeled vocalist and pianist. After college, however, she longed for more and wanted to work outside the instrument’s set vocabulary of chords and harmonies.

“It started getting really theatrical just because I was bored with my writing process,” she said. “I started writing without any instruments, and it allowed me to think outside the box.”

Her tinkering eventually led her away from the upright piano and into the world of keyboards, vocal loops and pedaling. No one would guess it now, but Hosein admits that at first, she was not very good at the technique. The learning curve was steep.

She endured the growing pains, however, and never let herself stray from live performances. It was that tenacity that led her to her current mastery.

“You can practice as much as you want at home,” she said, “but if you’re not doing it out in the world, it’s not going to get as good as it needs to be.”

The Trishes show at Tower Theatre marks Hosein’s first trip to Oklahoma. Still, the performer said she feels an attachment to the state through her love from afar for the Oklahoma City Thunder, which she calls her second favorite basketball team.

Before locals start feeling a sporty kinship with Hosein, they should be advised that her first favorite team is the Golden State Warriors. Like the premise of her music, Hosein felt another internal conflict when the Thunder and Warriors faced each other in the 2016 conference finals. The Warriors used a late-series comeback to advance past the Thunder before ultimately falling to Cleveland in the league finals.

Outside of music and basketball, Hosein also enjoys hiking, yoga and reading. She also passes time by taking dancing and boxing classes.

A diverse range of interests seems appropriate for a musical act founded on split internal desires. Hosein’s many fragments are, in fact, what makes her whole — much like the musical technique that has come to define her.

“It definitely feels like an extension of myself,” she said.