Art should not be limited to pieces displayed in museums or in the homes of private buyers. A T-shirt might not be judged as nice enough to pass muster with picky bouncers at New York City’s most exclusive nightclubs, but that is no statement on the clothing item’s validity as artwork.

“These are presented as actual [art] pieces, so it’s totally different from what they usually do,” he said. “But it’s still their artistry.”

The night will feature music from Original Flow and The Fervent Route as well as Sativa Prophets, Druce Wayne, Jarvix, StuddaBudda and Barfbag Bitterbites.

“Clothes should always be feasible for us because that’s what we wear,” he said. “And they portray a percentage of who we are.”

Barnes, one of the show’s participating artists, said he thinks T-shirts are underappreciated as an art medium.

“I like that they’re the modern-day pamphlet,” he said. “It’s a way to share ideas, beliefs, fashions and identity. They can be a way for artists to spread their work and they’re affordable.”

Carpenter has already received a lot of good feedback on the show concept. If this show is successful enough, he said it might be the first in a series of T-shirt art shows.

“I would like to set the bar on events like this and continue to grow from there,” he said. 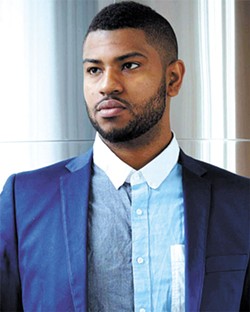 The idea for The Art We Wear was sparked from a conversation between Carpenter and participating artist Farrell at a Speakeasy music showcase.

“I talked to him and he was like, ‘Dude, there should be an art T-shirt show here,’” Carpenter said. “I thought, ‘Absolutely.’”

The same night Carpenter approached Speakeasy co-owner Greg Bustamante about the possibility of hosting such a show. Bustamante said that he had already thought of something similar and welcomed Carpenter on as the concept’s host and organizer.

For the event, Carpenter approached several artists he already knew while also reaching out to a few he hadn’t met yet. He has loved the process of putting the show together, but it has also been a lot to keep straight.

“It can be overwhelming at times,” he said, “because you’re working with so many artists and you’re making sure the things are set up right, because it’s all about the visual. If there’s even the slightest change, that irritates you, speaking as the artist in me.”

Speakeasy is known for hosting uniquely themed art shows and events that are almost all well attended. As a first-time art show host in the venue, Carpenter said he is excited for the chance to build on that existing legacy.

“The way they create for the arts here, I mean, Speakeasy is honestly a powerhouse for entertainment, music and art,” he said.

One of the most exciting parts of The Art We Wear is the chance to see unique, small-batch shirt designs from some of the city’s best-known designers, including Dusty Gilpin at Tree & Leaf. The former 16th Street Plaza District shop recently closed its brick-and-mortar location but has continued its online store treeandleafclothing.com.

Gilpin said the impact T-shirts have on modern-day style cannot be overemphasized.

“T-shirts, although a simple medium, are one of the biggest forms of art and personal expression of our time,” Gilpin said. “The T-shirt is basically a billboard or canvas.”

Most of Gilpin’s shirts are centered on a key idea or statement he wants to make. Tree & Leaf is known for selling shirts that often reference the state and local sports teams. The Art We Wear is a chance for Gilpin to get more abstract.

“For this show, I think I will be producing some apparel that is a little bit wilder,” he said. “The idea of producing some one-off shirts is a lot of fun and offers a lot of creative freedom.”

Gilpin was a sophomore in college when he designed his first shirt in 2006. It featured an outline of the state with the words “Home Sweet HOMA!” on the inside.

“That basically kick-started my T-shirt career,” he said. “The message was simple, and at the time, there weren’t many fun, Oklahoma-themed T-shirts. I grew up as a third-generation graphic designer; simple illustration and type really aligns itself perfectly to being printed on a T-shirt.”

The closing of Tree & Leaf’s physical store was bittersweet for Gilpin.

“We are sad to lose the regular community traffic and the experience of retail and events,” he said. “However, I have a lot more time to work on much more dynamic art projects and collaborative projects.”

Since the closing, Gilpin said he has been engaging in more personal projects, including murals and other graphic design work. He is teaming with Tower Theatre to produce some limited-edition event posters and will soon be preparing for art projects like the Milk Crate Jam in the Plaza District and Tulsa’s Habit Mural Festival.

Carpenter dabbles in graphic design but thinks of himself as more of a renaissance artist. His visual and video art are usually extensions of his work with The Fervent Route.

“It started off with just me being a musician, but then I realized what it takes to be a successful musician,” he said. “You have to understand the way you present yourself artistically, so you have to study things like graphic design and videography.”

The main thing Carpenter loves about graphic design is that it can drop art onto any kind of surface and in many different places. It has taken the accessibility of art to a new level.

“Nowadays, art has been placed on pretty much every platform because we’re seeing the significance of it, I feel like,” he said. “We’re starting to see how much it’s needed in today’s society, too.”

“It’s always going to continue to grow and change people’s minds,” he said. “I feel like events like this remind us that art is important.”

Print headline: Off chest, T-shirts are presented as art in the 51st Street Speakeasy show The Art We Wear.