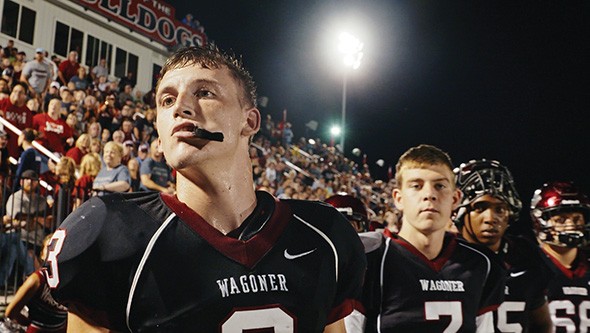 He lives in Austin now, but filmmaker Bradley Beesley has spent much of his life thinking about Oklahoma. His documentaries about barehanded fishing (Okie Noodling), the Oklahoma State Penitentiary rodeo (Sweethearts of the Prison Rodeo) and The Flaming Lips (The Fearless Freaks) shine a spotlight on some of the state’s stranger corners. Growing up in Oklahoma, Beesley said he considered the subjects for years before making the films.

His latest documentary, Fathers of Football, screens 8 p.m. Friday at Rodeo Cinema, 2221 Exchange Ave., followed by a Q&A with the director. The film chronicles the Wagoner High School football team during its 2015 season, but Beesley said he has been preparing to make a similar film since the early 1990s.

“My dad was a high school football coach,” Beesley said. “I filmed a lot of his games when he was coaching even though I didn’t know what I was going to do with the footage, kind of in the same way that I started out filming music videos for The Flaming Lips, and after 10 years of having a bunch of behind-the-scenes content, I thought, ‘Oh, I could make a film out of this.’ … I’ve learned now to just start shooting, start engaging with the idea, and then over the years, it’ll build into something.”

His father, who Beesley described as a “football-coaching drifter,” worked for schools in Del City, Meeker, Crooked Oak, Dibble and other small Oklahoma towns and coached Beesley when he played as a linebacker and fullback for Piedmont in the ’80s. Though Beesley is currently working on a documentary about his father, none of the footage filmed at his games appears in Fathers of Football.

“I don’t think my dad was willing to go deep enough,” Beesley said. “[Wagoner Coach] Dale Condict was a better subject for a high school football documentary because he just allowed total access to me and my crew, and he was just totally open about his process and his life. He shared everything and wanted to share everything. … It was very difficult to get my father to emote. He wasn’t a guy that ever screamed at you. In fact, a lot of the players would say, ‘Man, doesn’t your dad ever want to get us fired up more or yell at us?’”

Fathers of Football finds Condict at a particularly emotional time in his life, soon after his father Tom, who was also a high school football coach, died of colon cancer and his son Austin, a player on the Wagoner Bulldogs football team, was diagnosed with testicular cancer. Because Condict was so open about his personal life, he was an ideal collaborator for a documentary, Beesley said, but the filmmaker was surprised that Austin was also willing to share his experiences for the film.

However, many of the other players were more reluctant to talk about their thoughts and feelings.

“Teenage boys are just a little more guarded and less willing to share,” Beesley said. “That was really the most difficult part of making this film, because I had never faced that before. Making the prison rodeo film, the women that we filmed with and most of the men were very receptive to telling stories and wanted to tell their stories. Clearly, Dale and Austin did, but I think a lot of the other players on the team were not as receptive. … At times, I really felt like, ‘Oh, man. I’m pushing these teenagers too hard to divulge things about their personal lives that they don’t want to,’ so I’d have to kind of back off. In fact, we completely removed one of the characters from the film just because he wasn’t able to kind of go there with his backstory and his emotions the way some of the other players did.”

Modern technology also provided an avoidance tactic that was not as readily available when Beesley first filmed football games in the early ’90s. 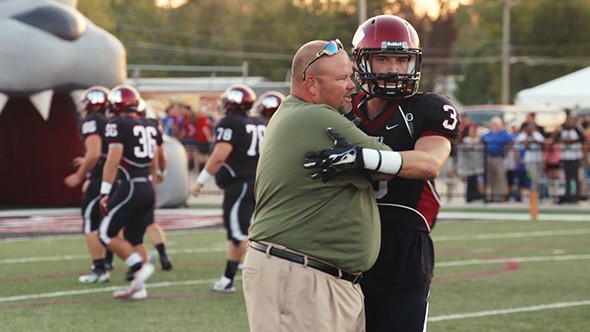 Though concussions and the associated risk of chronic traumatic encephalopathy (CTE) are hot topics of conversation in contact sports these days, football’s potential health risks did not seem to be much of a worry for the players, who were more concerned with “winning a state championship and hanging out with their girlfriends and finding out where the lake party is,” Beesley said.

“Shockingly, throughout the entire season, no one on the Wagoner team received a concussion, and I thought that that all along was going to be a good jumping off point for us to discuss that — which we do, but not at length,” he said. “There’s definitely a couple of scenes regarding concussions that were cut from the film that just didn’t play with the rest of the themes as well as we wanted them to, but definitely a topic that we, as filmmakers, thought about and explored.”

At one point during the film, Condict watches a news report about high school football-related deaths.

“At the state championship game in 1982,” Condict said, “I can remember my dad, one of his better players got knocked about half out on the kickoff team … an obvious, bad concussion, and they’re all trying to figure out a way to get that kid back in the game. But of course, that was before we knew that could be worse. There’s definitely going to be major changes coming to football.”

Though Beesley had access to the locker room, sidelines, players’ homes and even doctor’s appointments, he said there was one thing Condict, one of the winningest coaches in the history of Oklahoma 11-man football, never gave the filmmaker.

“I wanted them to lose,” Beesley said. “I didn’t want them to lose during a playoff game, but I would tell Dale after they won a game, ‘Man, I thought you were going to lose that and it was going to be great,’ simply because I know how emotional high school football is. …  I cried after every high school football game that I ever lost … and I played for three years and won five games. That’s a lot of crying. You take it so personally. It’s so hurtful. … You’re just so wrapped up in it. The community is so wrapped up in it, and it’s all you’re preparing for all week. It’s not too dissimilar to a film production. There’s so much pre-production that goes into it, and then you have a game night.”

But even when the film turns out differently than he planned, Beesley said he is more concerned about letting the subjects control their own narratives.

“For me, it’s never been about guys catching giant catfish or prisoners riding bulls or kids playing football or whatever,” Beesley said. “It’s just about humanizing individual stories through these character-driven documentaries, so it’s hopefully less topical and more about the people.”