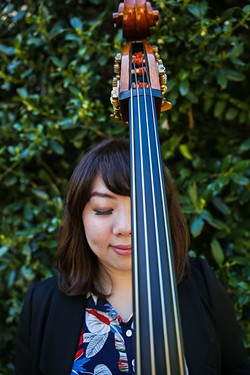 Edmond-based jazz bassist Rei Wang can be seen dazzling happy crowds at jazz nights across the metropolitan area, which is hard to imagine considering less than 10 years ago, she was living in Taiwan with literally no idea the musical genre even existed.

“I didn’t know about jazz,” Wang said during a recent Oklahoma Gazette interview. “I didn’t have any concept of that.”

Wang, 31, began learning classical bass at age 9. In her native Taiwan, music education is very different from what one finds in the United States. Many American students are lucky if they begin their formal music education in middle school. However, select Taiwanese students sometimes begin an intensive education in classical music before their 10th birthdays.

Before she ever handled a bass, Wang started learning piano at age 4 — not an uncommon starting point for children in Taiwan and some other Asian countries. In elementary school, she was placed in a special class for students who showed musical promise. From that point to her high school graduation, classical music and technique was drilled into her memory.

Wang attended a college in Taiwan to get her undergraduate degree. She had a friend whose fiancé was studying jazz trumpet in New York, and during Wang’s junior year in college, he launched one of Taiwan’s first student jazz camps. She agreed to attend but was not enthusiastic about it beforehand.

“I went to that camp just because I wanted to support my friend and her fiancé,” she said.

But what she heard and saw during her time in that camp immediately grabbed her imagination and would eventually alter the course of her life. Wang is highly regarded by many of her peers in the local jazz and music scene. She can often be spotted performing at Saints’ monthly jazz showcase every first Thursday of the month in 16th Street Plaza District. She was the series’ featured performer during its March show. Wang is scheduled to appear April 5 alongside featured artist drummer David Bowen at the bar, 1715 NW 16th St.

Adam Ledbetter — who has played keys alongside Wang in the past and is known as half of the multi-genre singer-songwriter couple Adam & Kizzie — said Wang is proof that the spirit of music comes from within.

“To have come from as far away from where our music was born and cultivated as Taiwan and to be on the scene, swinging like she is — it’s a soul thing,” he said. “She’s a breath of fresh air and has a very commanding presence on the bandstand; a real joy to play with and for.”

The thing about jazz music that immediately caught Wang’s attention was the freedom and room for improvisation it afforded its players.

“In classical music, we need to do things exactly like the sheet and chart says,” she said. “In jazz, it’s not like that. You still have direction, but you can do a lot more.”

After her first introduction to jazz at camp, Wang had to start preparing for her classical recital ahead of graduation and wasn’t able to take any active steps toward actually learning more about jazz. But the new style never fully left her mind, and when she finally did graduate, she began seeking jazz instruction from the best mentor available to her.

“I tried to find a teacher in Taiwan, but we don’t have many jazz people,” she said. “But, fortunately, we do have YouTube.”

Wang said she watched countless videos of jazz bassists like Ray Brown, Christian McBride, John Clayton, Paul Chambers and Esperanza Spalding, whom she calls a “goddess.” She learned a lot about the music from these videos, but she was still clueless about things like proper jazz posture and the genre’s vernacular, which is different from classical music.

The bassist knew if she wanted to become a good jazz player, it would require formal instruction in the U.S. She applied to schools across the country before picking University of Central Oklahoma (UCO), a choice she made partly due to price and partly due to the school’s strong jazz program.

Wang’s first day in Oklahoma was Aug. 1, 2014. She still remembers the culture shock that set in when she stepped off the plane at Will Rogers World Airport for the first time.

“In Taipei and even in, like, New York, we have tall buildings everywhere — it’s hard to see the sky,” she said. “When I got here, my first impression was, ‘Wow! This airport is small.’ And when I got out I was like, ‘Wow! There’s no buildings around this place.’”

Still, she soon adjusted to her new home. The harder adjustment was going from classical playing — a realm she was very comfortable in — to learning jazz. In some respects, she was well behind some of her American classmates.

The hardest, most nerve-racking thing for her was attempting anything that went off-script.

“In the beginning, I liked jazz,” she said, “but every time they wanted the bass to take a solo, I always felt so terrified because I don’t have a chart or music to help me play.”

At first, Wang turned back to YouTube, transcribing different bass solos she saw and committing them to memory. This helped get her by until she finally got more comfortable with the thought of improvising.

Wang would like to stay in Oklahoma long-term, but there is no guarantee she will even be in the country past this summer. Having earned her master’s degree in jazz performance from UCO last year, the bassist is trying to secure a new artist visa before her current stay expires in August. Application and legal fees make it a very expensive process with a lot of uncertainty involved.

“It costs a lot of money,” Wang said. “It’s just like putting all the money in the water and you just never know.”

Regardless of whether she is able to attain a visa that keeps her in the U.S. past this year, Wang’s goal is to one day reunite with her Taiwanese jazz band — a group of players that all met each other through college jazz camp. Wang said most of the band’s members are currently studying abroad at various schools across the U.S.

“It’s good to have a group of friends that can practice together and talk about jazz,” she said. “When we talk about jazz to someone else [in Taiwan], they will just look at us weird.”

The players have a common goal: to one day return to their home country and develop their own jazz education program. While Wang learned a lot about classical music while growing up in Taiwan, she said the country’s thinking on music education is in need of some changes.

“Looking back,” she said, “I think that was awful because I only know how to play classical and I didn’t know anything about how to do anything else.”

Wang said it would likely take decades of education and work before her home country could field a jazz band comparable to the best high school bands in America. But she is up to the task of broadening her home’s horizons.

“A lot of kids in Taiwan, they don’t know anything else,” she said. “That’s really bad.”

Print headline: Free style; Taiwanese bassist Rei Wang transitioned from her classical training to jazz with a move to Oklahoma.