Take your taste buds on a vacation at Chibugan Filipino Cuisine 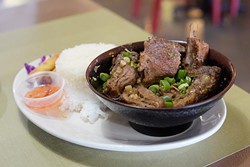 Getting fooled by Last Week Tonight with John Oliver jokes about pointing to the wrong country on a map time and again should have been enough to motivate me, but the breaking point came after a visit to Chibugan Filipino Cuisine.

The Del City eatery at 4728 SE 29th St. is wonderful. The food is exotic and familiar, the service is friendly and the dining room is stacked so full of pictures and knickknacks that anyone dining there alone will have plenty to look at other than a phone screen.

And then my friend asked, “Where are the Philippines, exactly?” and I realized I had no idea other than somewhere in Asia.

For shame! Not only has new President Rodrigo Duterte been all over the news, but the Philippines were once under U.S. rule. I’ve met lovely Filipino Oklahomans with Asia Society of Oklahoma, but the country’s location remained a mystery to me.

Here’s a rundown in case you get quizzed later.

The official name is Republic of the Philippines. The country is made up of more than 7,600 islands in the South China Sea near Indonesia, Vietnam, Taiwan and China. The people speak Filipino, and they know how to cook a pig.

Taste that last fact for yourself at Chibugan, which translates from Filipino as “eating.”

A best bet is pork ribs adobo. (All entrees are $6.95 at lunch and $7.95 at dinner.) Diners receive a platter with a heaping helping of rice, two dumplings called lumpia and a bowl full of tender ribs that were marinated in soy sauce and vinegar before being sautéed.

Like any ribs, be prepared to eat around the bone. There’s one problem, though: The ribs come with a good deal of sauce, which makes them a bit messy to eat. Plus, they’re hot, so you’ll need to hold off a minute before you pick them up.

Either peel the meat off the bones with a fork or pick them up and go for it. The risk of messy fingers is well worth the flavor of the ribs, which have a nice, solid chew to them. The pork is juicy, and the sauce that coats the ribs and marinates the meat is salty with a nice tang.

Let’s not give lumpia short shrift here. These tiny little eggroll-shaped dumplings are full of meat and make an outstanding snack. If the two that come with each meal aren’t enough, diners can get 12 for $4.99. They disappear fast because lumpia are perfectly bite-sized.

The pork dish I thought I’d like the most was actually my least favorite. Lechon kawali are chunks of pork belly that are seasoned and deep-fried. It sounds like the most Oklahoma dish ever, but in practice, it’s a little tough and wasn’t as flavorful as anticipated. It tastes good, but there are other dishes that demand attention first. Your experience might be different, though.

For anyone tentatively wading into Filipino cuisine for the first time, chicken barbecue skewers are a good bet. The meat is marinated in a mix of banana ketchup, brown sugar and soy sauce, giving it a juicy texture and a big burst of flavor. The sugars in the marinade stick to the meat and char up nicely on the grill, so there’s a little smokiness to the taste.

Plus, everything is better on a stick. Even though it’s not quite as sauce-heavy as the pork adobo, it’s nice to have the skewer to hold while nibbling on the chicken.

There is also a pork version that comes with a bit more meat and the same combination of banana ketchup, sugar and soy sauce.

Though it looks similar to pad thai, I found pancit bihon to be a little bland. The massive plate of rice noodles sautéed with pieces of chicken and a mélange of carrots, scallions and other vegetables was filling, but it lacked any sense of momentum that can be found in many Thai noodle dishes or a great lo mein. The addition of some soy sauce helps, but I found myself wishing for more citrus to squeeze over the plate. That bit of brightness and sourness can make a plate of noodles irresistible.

One of the most comforting dishes on the menu is bistek, which literally translates to beef steak.

Slices of beef are sautéed and simmered in a blend of lemon juice, soy sauce and caramelized onions for a taste that is remarkably close to my ideal version of pot roast. The beef isn’t quite so ready to fall apart as in a roast, but the flavor was wonderful with just a little zing from the lemon juice. The onions spice the sauce and hold onto it, packing more flavor into each bite.

I’d like to spotlight a little-recognized piece of many meals that Chibugan does perfectly: rice. I likely wouldn’t go anywhere just for white rice, but the restaurant cooks each mound masterfully — with good reason, too, since almost every dish comes with rice. It not only makes each entree more filling, it soaks up the delicious sauces, extending the flavor.

I’m far from an expert on the Philippines or the country’s native cuisine, but if it tastes as good as the food they make at Chibugan, we should all pay attention.

What works: Saucy pork ribs adobo are a must, and lumpia are addictive little bites.

What needs work: Pancit bihon could use a spice infusion.

Tip: Filipino food isn’t inherently spicy, so those worried about too much heat can relax.