There are two kinds of people in this world, and they both love soup.

Divide the population of our planet any way you like — dog and cat people, men and women, rich and poor, toilet paper roll facing out or facing the wall — the one thing we agree on is that soup is delicious.

Oklahoma City has long been pho crazy, but the past few years brought another much-loved soup from the Far East to our hungry metropolis: ramen.

Now comes the part I’ve been dreading because I hate this explanation, yet it must be done. Restaurant ramen is so different from the 25-cent blocks of dried noodles and “flavor packets” you get at the grocery store that it’s like comparing a Kentucky Derby winner with a My Little Pony. You can call both of them horses, but it doesn’t make them the same.

So when you visit Tamashii Ramen, 321 NW Eighth St., do not think for a second that your meal will in any way resemble Top Ramen.

A bowl of tonkotsu ramen ($9.50) will change your life for the better. Making the broth is a long-term process for Tamashii. Intensely flavorful and possessed of a creamy, luscious texture, the soup is a masterpiece. I have yet to see anyone take a first sip of the tonkotsu without his eyes rolling back in his head.

And that’s just the broth. Inside the bowl is also braised pork belly, marinated bamboo, green onion, a soft-boiled egg and a beautiful al dente noodle that adds a satisfying heft to the dish.

Pork belly (aka chasu) is the meat of my dreams held together by little more than a sear on the griddle and the will to melt in your mouth.

I foolishly avoided the miso butter corn ramen ($9.75) until recently because I don’t especially love corn floating in soup. Well, I was wrong. The miso flavor sets this apart from the tonkotsu, but it’s just as delightful and inviting as its menu mate.

Another version of ramen is dipping noodles, or tsukemen ($12.75). These are thicker noodles and all the fixings served on the side with a broth so potent you just swish your noodles or pork belly in it before each bite.

You can try to drink the broth, but be warned that the mix of pork and fish base will punch you in the mouth with an almost overwhelmingly powerful salty flavor.

“So I should order the ramen at a place with ‘ramen’ in the name? Great advice, Greg. What’s next? Any recommendations on breathing air?”

I know it’s not hard to guess that Tamashii makes an excellent ramen, but it also has some dishes so enticing that I have ordered them in lieu of the ramen.

Chasudon ($4.50 for a small, $8.50 for a large) tastes like the karmic payback for being a saint in a former life. It’s a big bowl of rice covered in braised pork, special sauce and truffle mayonnaise.

It’s so delightful, I want to sing John Mayer’s “Your Body Is a Wonderland” to it. The rice is a lovely base for achingly tender chunks of pork, and it soaks up the sauces to create a creamy, chewy, sweet and salty umami hurricane in your mouth.

Truly, that is enough to make Tamashii a destination for anyone. But then there’s a dish so unexpectedly wonderful I feel like I’m being pranked.

Garlic fried rice ($7.50) comes out in a sizzling skillet. The eggs are beaten at the bottom of the pan, cooking into an omelet. Don’t wait; when it arrives at your table, start stirring it. The egg will mix with the rice, and the garlic butter will melt into it, leaving a seductively intense fried rice with crisp edges and concentrated flavors. 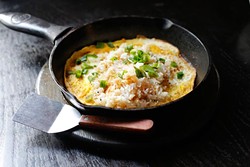 All of the above are available at lunch and dinner, but Tamashii recently rolled out a dinner-only menu of yakitori — skewers of pork, chicken, vegetables and seafood. The restaurant brought in a yakitori chef from Japan to teach the staff how to cook over the tiny grill.

Not everyone enjoys chicken livers, but I think the skewer of grilled livers is a delicacy. Extremely tender, the fatty liver takes minimal chewing to give you maximum flavor. The slightly mineral taste could put some off, but I’m a fan.

The chicken thighs, which are dark meat and, thus, a little more forgiving on the mercurial grill, are more approachable. It’s simple, but when grilled meat is done correctly, it doesn’t need much work to be good.

With construction nearly finished on its patio, Tamashii is addressing one of its biggest problems: lack of seating. It turns out that when you employ happy servers and make delicious food, people will line up for it.

No matter how long, the wait at Tamashii has always been worth it to me. I bet you’ll feel the same.

What works: Tonkotsu and miso corn butter ramens are tremendous.

What needs work: Waiting for a table can be frustrating.

Tip: If you’re looking for yakitori, you’ll have to go at night.