Paul Tay has both stalled the petition drive for State Question 807 and gotten the green light for his own State Question 808 and promises more legal actions from within the confines of the Tulsa County jail. 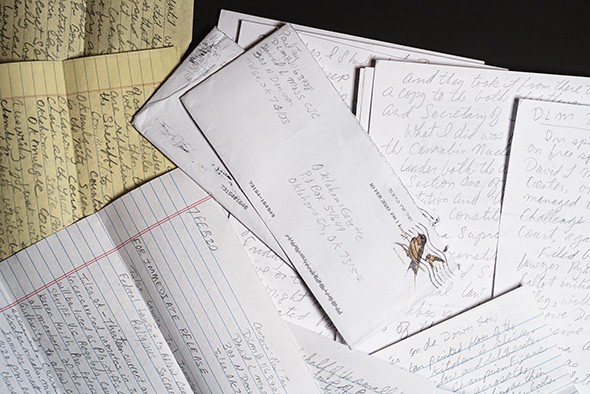 The petition drive for State Question 807 remains in limbo while the Oklahoma secretary of state has given the go-ahead for the gathering of signatures for State Question 808, but the author of that measure is both the challenger of SQ807 and also remains jailed in Tulsa County.

Paul Tay is the central figure in both state questions at the moment, but a conviction on outraging public decency during a January jury trial has him jailed for nine months, or through the duration of the SQ808 petition drive, which began on Feb. 12. Proponents have 90 days to gather the nearly 178,000 required signatures to get it on the ballot in November. Signed petitions are due to the secretary of state’s office no later than 5 p.m. on May 11.

The same number of signatures is needed to bring SQ807 to the ballot box this fall, but that effort has been stalled by a challenge Tay brought forth last month. He claims that the proposed ballot title is in violation of the supremacy clause of the U.S. Constitution since cannabis is federally illegal.

The Oklahoma Supreme Court accepted Tay’s handwritten challenge and have set the matter for hearing in front of a Supreme Court referee the morning of Feb. 26. Tay will appear via teleconference from the Tulsa County jail. Ryan Kiesel and Michelle Tilley, the signed proponents of the ballot initiative, are required to file their response to the challenge on Feb. 18 ahead of the hearing. The brief had not been filed with the court as of Feb. 14. A Supreme Court referee hears the arguments from both sides and then prepares a short report for the justices to decide the matter.

Meanwhile, Tay has also been sending handwritten letters to Oklahoma Gazette from the Tulsa County jail. Many of them are titled “DLM Diaries on da Down Low” and document Tay’s experiences from inside the David L. Moss Criminal Justice Center in Tulsa County. One letter is Tay arguing that he is a political prisoner whose right to free speech was violated and announcing the formation of the Tulsa First Cannabis Church of the Flying Spaghetti Monsters. Another outlines his reasoning behind why he filed the constitutional challenge and what he plans to do with the church if his “cannabis nuclear option” finds success with the Oklahoma Supreme Court.

“In spite of being a prisoner of war on free speech, incarcerated inside David L. Moss Criminal Injustice Center, or perhaps because of it, I managed to file the constitutional challenge in the Oklahoma Supreme Court against State Question 807,” Tay wrote in a letter postmarked Jan. 27. “Filed by ACLU Oklahoma’s super lawyer Ryan Kiesel and super duper ballot initiative petition operator, Michelle Tilley, with the high dollar legal help of Crowe Dunlevy, SQ807 would create a massive state agency, Oklahoma Marijuana Authority, to use cannabis partakers as ATMs for all of the state’s motley plethora of ills. As a last minute Hail Mary pass from inside David L. Moss, I hand wrote the constitutional challenge and mailed it to the Oklahoma Supreme Court. And they took it from there to mail a copy to both the Attorney General and the Secretary of State. What I did was push the button on the Cannabis Nuclear Option. Under Article One, Section One of the Oklahoma Constitution and the Supremacy Clause of the U.S. Constitution, I dared the Oklahoma Supreme Court to declare SQ unconstitutional, because of the Controlled Substances Act, the federal law criminalizing cannabis is still the supreme law of the land. No state constitutional article may override the supreme authorities of the Controlled Substances Act or IRS Rule 280E. IRS prohibits Federal Reserve banks from doing business with cannabis entities. Of course, to any astute attorneys paying attention an Oklahoma Supreme Court ruling declaring SQ807 unconstitutional threatens to lay waste the current medical program enacted by SQ788. The Oklahoma Medical Marijuana Authority may be required to sunset immediately under the supremacy of the Controlled Substances Act. Cannabis industry across 30 states with ‘legalized’ cannabis may go back to being black market, with ‘legal’ cannabis and its attendant rush by state legislators to over-regulate, without allowing the plant to legally cross state lines and international borders, the black market is certainly under-rated. Before California’s ‘legal’ cannabis, Humboldt County growers were rightly worried about losing their black market livelihoods to over-regulations. Be that as it may, I pushed the button on the Cannabis Nuclear Option anyway, because I know there is a very obvious, gaping loophole for patients to get the medicine they need. In California, there are actually four cannabis markets. There is the ‘legal,’ over-regulated market, the gray, sorta ‘legal’ market, the pure black market and then, there are cannabis churches. Simply slap a cross on the buds, the bongs and the brownies. Whamo. Boom. Completely legal cannabis under the authority of the Religious Freedom Restoration Act, Religious Land Use and Institutionalized Persons Act (RLUIPA), the Establishment Clause and the Equal Protection Clause. Suddenly, the Tulsa Cannabis Church of the Flying Spaghetti Monsters is no longer Cavanaugh’s satire for millions of illegally healed patients.”

“In spite of being a prisoner of war on free speech, incarcerated inside David L. Moss Criminal Injustice Center, or perhaps because of it, I managed to file the constitutional challenge in the Oklahoma Supreme Court against State Question 807.”
—Paul Tay tweet this

In another series of letters postmarked Feb. 10, Tay sent Gazette his notice to appeal his Tulsa County conviction, his assessment of the Tulsa County jail conditions and a “press release” detailing his plans to petition in federal court for inmates to be able to use cannabis as a medical sacrament while incarcerated.

“Thirteen current and formerly incarcerated inmates in Tulsa County jail will be listed as Plaintiffs against Defendants Vic Regalado, county commissioners Karen Keith, Ron Peters, Stan [Sallee] and all members of the Tulsa County Jail Authority, to allow cannabis as religious sacrament,” Tay wrote. “Currently, Jews are allowed special meals. Muslims allowed special meals. Inmates meet for Friday afternoon services at 4:20 p.m. as members of the Tulsa First Cannabis Church of the Flying Spaghetti Monsters. Because of the jail policy prosecuting cannabis as contraband … the lawsuit focuses on the inmates’ request for cannabis as religious sacrament to accommodate a sincerely and universally held religious belief that cannabis is necessary to exercise religious experiences to recognize the presence of The Almighty Noodly One, The Flying Spaghetti Monster, contained within a bowl of spaghetti and meatballs, or ramen.”

Tay had not filed his lawsuit with any of the U.S. District Courts of Oklahoma as of Feb. 17.