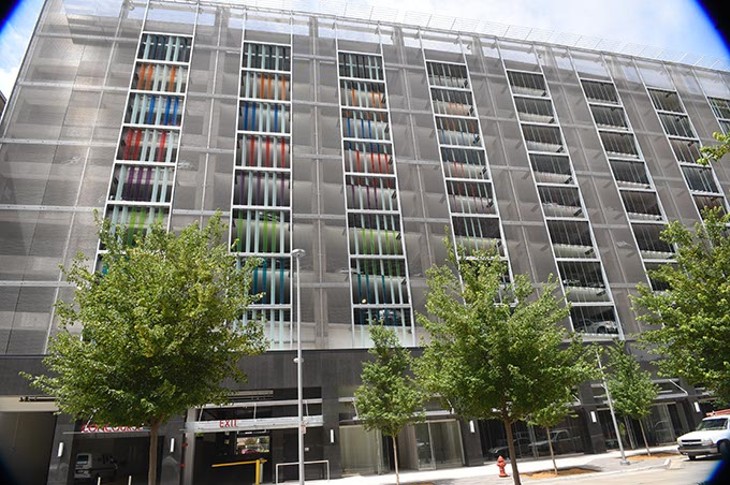 Just mention the words “parking garage” around any group and you will get at least an “ugh!” if not profanity and stories about the dark, scary, confusing parking garages that they recently used or perhaps use daily.

Architect Anthony McDermid set out to design a better kind of parking garage for downtown Oklahoma City, and his firm, TAP Architecture, won an international award for it.

The architectural partnership earned top honors when the International Parking Institute gave them the Award for Architectural Achievement for 2015 at their annual meeting in July.

Arts District Garage sits between Main Street, Colcord Drive and Hudson and Walker avenues in the heart of Oklahoma City.

The award itself is significant, but even more significant is that the expectation for parking garages in OKC is now higher because of a successful collaboration.

Central Oklahoma Transportation and Parking Authority, now operating under the new brand EMBARK, is the client for the new garage.

Debi Holtzclaw, parking manager for the trust and lead city staff member on the project, said that the goal was to set the bar higher for parking structure standards in downtown OKC.

Because of its prime location, a provision was made in its engineering to support later development of more stories of apartments on top, an unusual feature for parking structures in OKC.

EMBARK set some high expectations for the architects, demanding that the exterior design exceed the usual designs for parking structures and complement both the art deco and modern architectural styles that are prominent in the Arts District.

McDermid had high praise for EMBARK and its staff’s depth of experience in developing parking garages.

“They were a sophisticated client,” he said. “They provided enough money for the facility to include some enhancements that you don’t ordinarily see in a garage.”

Those enhancements show the years of experience of the EMBARK staff as they learned from developing and using their past parking garages.

Poor lighting both in the daytime and at night is a No. 1 complaint that many past parking garage users have had. To solve that problem, TAP incorporated white, non-peeling paint on the ceiling of each floor with LED lights and unusually open sides to each level using steel, cables and glass panels that allow for much more light.

Since the garage is designed for multiple uses, which would include many drivers who are in the garage for the first time to attend events downtown, clear signage and the color-coding of each floor makes for easier, faster movement in and out of the garage, especially at night.

Entry and exit from the garage is possible from both Colcord Drive and Main Street, using automated pay stations accessible either on foot or in the exit lanes.

TAP is designing the first floor build-out for retail and offices, which will open in the fall. EMBARK offices will include a large and a small multimedia conference room for OKC committee and commission meetings when the Oklahoma City Council chambers cannot be booked.

Two other tenants are also building spaces. One is The Foundation for Oklahoma City Public Schools, and the other is Clarity Coffee.

Steve Williams, owner of Clarity Coffee, said that he is eager to open his coffee shop in September and become a part of downtown, “where the action is and where the people are.”

McDermid said the Arts District Garage is one of TAP’s most important contributions to public life in OKC since he and John Ward formed the company by merging their firms in 1988.

Oklahoma Judicial Center was what McDermid called “one of those once-in-a-lifetime projects” that involved adding new facilities for the Oklahoma Supreme Court onto the existing building that was once home to Oklahoma History Center, giving the appearance that the new addition had been a part of the original building all along.

John Rex Charter Elementary School has been in use now for one school year and was the first school built anywhere close to downtown since the early days of OKC.

TAP developed the Core to Shore concept plan and is making plans for the renovation of Santa Fe Depot, which will involve a major engineering feat of opening a tunnel under the existing tracks into Bricktown. Core to Shore is an extensive project that will create a downtown park that includes the existing Myriad Botanical Gardens and will expand south to the Oklahoma River. It will involve new mixed-use development with a 40-acre park.

That’s what TAP is about — not just playing the game, but changing it.