Alcohol laws have finally evolved in Oklahoma, paving the way for dozens of taprooms to serve their brews directly to the public.


In addition to the design of each individual brewery, from the white and bright interiors of places like Vanessa House to the cozy stylings of Cross Timbers, each creates an ambiance that marries the brewers to their brands.


But the guest of honor is always the beers and trying to get your hands on the latest draft drops and bottle releases can be a frustrating game in and of itself. With certainty, several of the beers mentioned here will have come and gone (and many times, the reserves are tapped by the end of release day). The point is not to tease you with bygone beers but to showcase the burgeoning and experimental beer scene in the city. If you missed something in the Oklahoma craft beer scene, just wait a minute and it’ll change.


One of the city’s earliest successes and most lauded breweries is Stonecloud. Tucked inside the old Sunshine Cleaners building right off Classen Boulevard, the brewery is well known for its core beers like the Astrodog, a strong IPA, and Havana Affair, a breezy pilsner, but spontaneity abounds within the walls as well. The Feel The Rhythm, a spontaneous sour, is sure to make you pucker and is the perfect contrast to the tiny batch of boozy milkshakes (strawberry and caramel) that were crafted from the remnants of their double-fudge stout, I Fudging Love You. If you missed both, grab some cans of their Jam Jam line for the best of both worlds. These pastry sours have shown up in all sorts of fruity flavors, from peach, cherry and blackberry cobblers to a bananas foster run. They move fast when they drop as well, so don’t sleep.


Angry Scotsman is another brewery that came in hot during the early days of craft beers. This will be the third spring for the taproom and their seasonal hefeweizen, or wheat beer, is making the rounds again. Founder Ross Harper is no stranger to collaborative beers and, for the hops fans out there, a very limited release for International Women’s Collaboration Brew Day. A New England IPA, which is the cloudy and citrus-laden variety of the notoriously bitter ale, Angry Scotsman’s Queen of Scots is a heavy dose of double dry-hopped flavor. If you’re new to the brewery, which boasts a beautiful and expansive patio area, try the flagship Scottish ale, the malt-laden Rusty Kiltpin.


Skydance Brewing became a fan favorite along the beer festival circuit. The Native-owned brewery recently opened its taproom near Automobile Alley, so now you can enjoy their award-winning Fancy Dance hazy IPA on the spot. And, if hazy IPAs are your thing, you have to try the Floral Freak Out made from a New Mexico hop named Zappa. Hopefully, they’ll be bringing out another Juice Wolves release this season — their pineapple and strawberry milkshake IPAs were attention-getting to say the least, as was the extremely limited run of Paisley, their double black IPA released last month.


Broke tends to specialize in what could be called “beer-flavored beer” and they do it well. Their pilsner, Pocket Change, won the Oklahoma Craft Beer Festival last year in that category. Fresh off their “half-anniversary” (the brewery opened on Feb. 29, 2020) where they released Banambers Foster (which came and is already gone) as well as two runs of their Big Budget Barleywine (the 2021 one went fast but there might be some of the 2022 variety left — maybe). Fortunately, their Manhattan is still around if you’re looking for a good strong beer. Made with Belgian candy sugar, this quadrupel also has a bourbon flavor and a strong cherry finish that makes for a very unique excursion off the beaten beer path.


Fair-Weather Friend specializes in producing eyebrow-raising brews made with some curious ingredients. It’s not uncommon to find peanut butter, marshmallows, pineapple or French toast in your draft. Those flavorful concoctions aren’t the only trick up Fair-Weather Friend’s sleeves, with a winter full of stouts (and okay, some of those had weird things in them too) as well as a diverse lineup of revolving IPAs. One of the best beers they’ve crafted, Sweet Afters, has just gotten a limited bottle release re-run featuring label design by acclaimed local artist and brewery bartender Kalee Jones W. The fruited slushy sour also happens to have some of that toasted marshmallow mentioned earlier in it. Take a chance — you’ll like it. 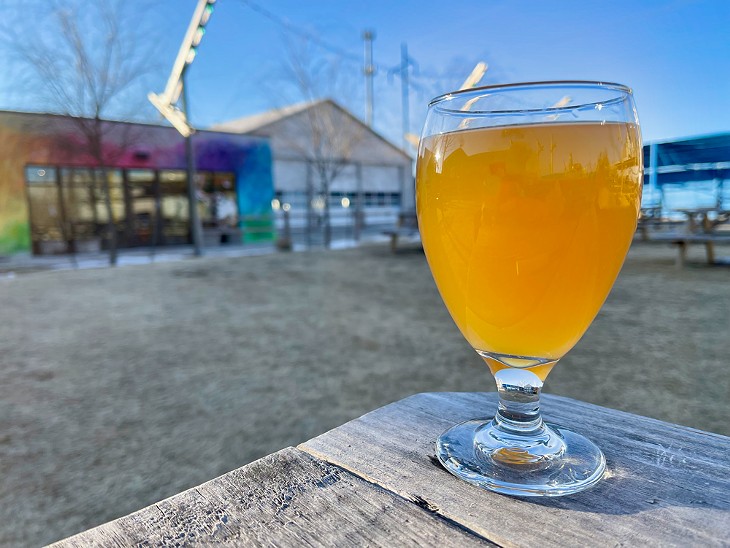