Eight local bands and eight local breweries team up for a concert and beer-tasting at The Jones Assembly. 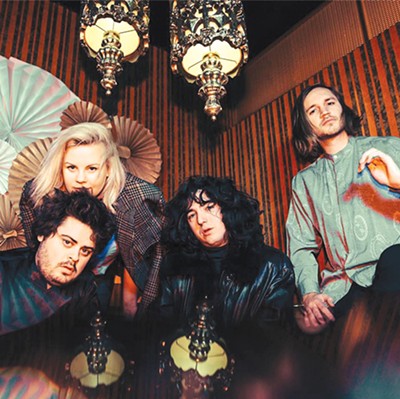 Several local musicians are celebrating their new releases with beers, and you can join them.

Cody Anderson, head brewer at Vanessa House Beer Co. and guitarist for Foxburrows, said Local Tap is inspired by Beer Nebraska, a similar festival held in Omaha. Foxburrows plans to release a single called “Shedding Season” to coincide with the festival, and Frenzy Brewing Company has created a beer called Shedding Saison for the event.

“All of us like beer,” Anderson said. “All the guys like that style, and we’re going to put some fun hops in there to kind of dry-hop it and give it a cool aroma. I think it’s something fun that we’ll all enjoy. We’re pretty happy with it so far.”

“It’s got a lot more fullness to it,” Brady said. “It’s still kind of ethereal and has some of the more spacey effects and things of that nature, but a little bit less of the soft, loud, soft type thing. And it does feel like it’s a bit more mature in its songwriting.”

Brady, who also works at Vanessa House, said the crafts of beer brewing and songwriting are comparable.

“I feel like there’s a lot of crossover between beer drinkers, beer makers and musicians,” Brady said. “As far as the process, it’s kind of interesting. You have a base that you can kind of sculpt upon, and as far as our songwriting goes, we do a lot of that. Cody brings a lot of the bases of songs to the table, and then from there, they kind of organically grow with everybody else’s input. That’s how we’ve always written songs, and it seems to work pretty well.”

But too much beer drinking is not conducive to music making.

“We usually have a beer or two beers,” Brady said. “Getting together and playing is sort of a hangout time for us as well … but generally we stay pretty sober during the entire songwriting process.”

Anderson, calling himself a “lightweight,” agreed. Vanessa House collaborated with Audio Book Club, which recently released the EP What If We Got Buff?, to create a yet-unnamed lime-zest lager.

“It’s basically like a cerveza base, and we zested a ton of fresh limes into it,” Anderson said. “It’s pretty good. We’re pretty proud of it so far. We haven’t nailed down a name yet. With the [state alcohol laws], you can’t have really anything that’s related to getting drunk or inebriated in the name, and I think their top three ideas were ‘Let’s Get Drunk,’ pretty much. So we’re trying to dial it in and find some common ground, but I think we’re getting there.” 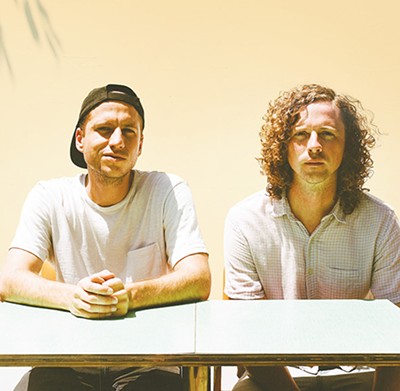 “It feels good to get it off of our chests because I feel like we’ve been sitting on a bunch of stuff for a long time,” Davis said. “It’s mostly guitar-based, pop-type stuff, but we definitely did a lot more with the drums this time. Because before, we would use samples pretty heavily and kind of build songs around the samples, but this time, we actually properly recorded in a studio with our drummer [Alberto Roubert], so from that perspective, it’s a little more intentional. ... There are cool synths and the ways that we use rhythms, I think, that are different. And also, I guess, lyrics that are more specific, maybe.”

The lyrics are inspired by the life changes that occurred since 2015’s Golden Year.

“Wil’s had a baby and graduated law school,” Davis said. “I’ve just been working, but I guess I turned 30, it’s a thing, and Wil turned 30 as well. … So it’s a lot about feeling kind of old and not even feeling old but basically just thinking about what it means to kind of get into a rhythm in life, because before, you’ve got all these possibilities, and now we’re sort of seeing what it is. I guess the simplest way to put it is it’s feeling like you’re in your 30s. That’s not a bad thing at all. It’s just kind of a new thing. You just feel settled, when before we would kind of value the feeling of being unsettled. It’s all good. It’s just basically processing those sorts of feelings.”

“We’re sort of a fun band, so having a drink with your friend is sort of one of our vibes or whatever,” Davis said.

Poolboy released its self-titled album in June and teamed with 405 Brewing Co. to create a custom beer.

“One of our singles is ‘Be Radical,’ so I think they’re going to call our beer Be Radical,” vocalist and guitarist Michael Loveland said, “but then afterwards, we were like, ‘Maybe we should’ve called it Beer Radical,’ but I didn’t get a response back from them.”

“We’re trying to make sure it’s spicy and interesting and new,” Loveland said. “We’re not going to do the same things forever. We’re going to always improve and try to make it fun.”

Twiggs releases its third album, III, on Oct. 4. The band teamed with COOP Ale Works — which vocalist and bassist Abbey Philbrick called OKC’s “OG brewery” — to create Shady Baby Lager, named after lyrics from the single “Shady,” released in July. Guitarist and vocalist Joe White III said he is excited to return to the local music scene here after spending a decade in Nashville, where the amount of musicians and the pressure to be successful can be overwhelming.

“It’s real effortless now,” White said. “Our boys in the band are really awesome, a perfect fit, so the new music is just really natural.”

“It’s got a lot of homey vibes because we’re back home.”

LCG & the X, The Nghiems and Breakup also share the bill, and beers from Roughtail Brewing Company, Anthem Brewing Company and Angry Scotsman Brewing will also be available. Tickets are $25 and include five complimentary beer tastings. Visit thejonesassembly.com.