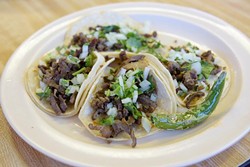 It’s a good sign when customers can’t decide which is their favorite dish at a restaurant.

After ordering a truly alarming amount of food at Taqueria El Rey, 100 S. May Ave., I turned to a couple of fellow diners and asked which menu items they liked best.

They eat at the little southside taco shop frequently, hopping from tacos to burritos, breakfasts to lunches and never leave disappointed.

Judging by the steady stream of patrons coming in the restaurant, it’s a feeling shared by many others.

There was only one dish I found disappointing: menudo ($6.75).

To be fair to Taqueria El Rey, menudo is an acquired taste that I have yet to acquire. A soup made with beef stomach (also called tripe), tomato and seasonings, it’s something customers across the metro love.

Many people were happily eating it during previous visits to the restaurant, so it’s no doubt delicious for those who enjoy menudo. I’m just not one of them.

Given how many menu items there are to choose from, it’s okay if one or two aren’t must-haves.

Consider, for instance, asada fries ($7.50). A much more relatable dish, it’s kind of like a plate of nachos, but with fries instead of tortilla chips. Over the top is nacho cheese, sour cream, chopped onions and a big handful of chopped carne asada. 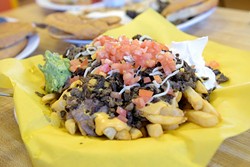 The marinade used at El Rey is wonderful and salty, but it plays a supporting role to the thin, fatty steak.

It’s slightly toothsome, which helps it linger on the palate a little longer, imparting a lovely burst of juicy, savory beef flavor. That added chewiness gives the dish a bit more longevity, too, so diners will take a little extra time to eat it.

Carne asada shows up all over the menu, as it’s one of seven meats available in most of the entrees.

While tripa is advanced course work for taqueria novices, both lengua and barbacoa are much easier texturally and flavorfully for first-timers.

Beef tongue is an amazing protein, and when prepared by the staff at El Rey, it’s a slightly chewy meat that quickly turns tender.

It’s especially good in a taco, where customers have a little more leeway in saucing and customizing the taste.

Barbacoa is delicious. Though carne asada rightfully gets love and attention, barbacoa has an intense beef flavor and a texture that truly melts on the tongue, thanks to lots of collagen that suffuses the meat with a full, almost creamy feel when it is slowly cooked.

A good bet is a three tacos plate ($5.99 with rice and beans) or four tacos ($5). Get a barbacoa or a lengua taco to try, and then get some asada or pollo that you’re sure to love.

Chicken isn’t always a great bet in tacos because many insist on using dry and mostly flavorless chicken breasts. But Taqueria El Rey’s shredded pollo is juicy and spicy, giving a lovely blooming heat in the quesadilla ($5.25).

Quesadillas are unjustly maligned by taco purists because the dish is often little more than a surplus of melted cheese hidden between two pale flour tortillas. Give this one a try, though, and note the care that goes into creating a golden, buttery shell.

The cheese that escapes gets fried crisp, which is a joy to devour. It’s a gooey, wonderfully decadent dish made all the more so with sides of sour cream and guacamole included in the price.

Chicken is the perfect meat to include in the quesadilla. There is enough heat and flavor from the pollo to balance out the mildness of the cheese. The juxtaposition of the fried tortilla with the soft interior is enchanting. It tastes like an advertisement for comfort.

Different but no less comfortable are Taqueria El Rey’s breakfast options, which are available all day.

Slam ($6.75) is a traditional breakfast of pancakes, eggs, sausage and bacon that would sate just about any early morning hunger.

But don’t overlook a breakfast burrito ($3.99), which is a big flour tortilla full of cheese, scrambled eggs, hashbrowns and a choice of sausage, ham or bacon.

There’s mass-market hot sauce on the table, but before slathering it on, check up front for the squeeze bottles of salsas and sauces the staff at El Rey makes.

They’re fresher, more flavorful and have a wide variety of heat, depending on your taste.

The breakfast of my dreams is machaca con huevos ($6.95 with rice and beans). Machaca is a seasoned beef that is dried and shredded, almost like jerky. But in Mexican cooking, the beef is rehydrated and cooked with tomatoes, garlic and peppers.

For this dish, the cooks prepare machaca with scrambled eggs, which soak up the cooking liquid and create a boisterous, beefy breakfast that is good with a fork and even better wrapped in a corn tortilla.

Also worth trying are the steak and eggs ($8.75). The steak is carne asada served with three eggs cooked to order, hashbrowns and toast.

It’s the perfect breakfast sandwich just waiting to be made.

The steak is tender and pulls apart easily. Eggs cooked over-medium have enough runny yolk to keep everything moist, and the bread holds it all together exquisitely.

Taqueria El Rey is one of the friendliest and tastiest restaurants around. Need another good sign? Just look for the one that says, “Open,” and head in.