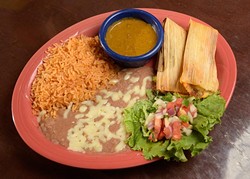 Though my trip to the popular Norman restaurant wasn’t inspired by his question, it was a nice bit of serendipity that Oklahoma Gazette reader Barrett Nuzum asked me via Twitter, “Is there any good, authentic mole in OKC? Wife and I were watching @oeta and now have a hankering.”

A brief confession about my eating habits: Watch your hands. Years of ever-shorter school lunch breaks and vying with my little brother for the last helping of mashed potatoes turned me into a voracious eater.

Usually, that’s evident with Mexican food when the vortex that is my mouth devours a plate of enchiladas and a couple of tacos in a matter of minutes. Not so with the mole, and if you’re a fast eater like me, I implore you to take a little extra time with this dish.

The slow-cooked sauce is sweet and bitter thanks to the prominent inclusion of chocolate in the recipe. The flavor is so rich and deep that it deserves the full attention of both mind and taste buds to parse every nuance on the tongue. It also masks some serious heat, which is another good reason to savor each bite.

The chicken is fork-tender and juicy, though its flavor is largely inconsequential because nothing can stand up to the sauce.

Those looking for a more subtle taste should consider Tarahumara’s tamale dinner ($9.75 lunch, $12.90 dinner). The corn masa outer shell is mildly sweet, and it comes wrapped around your choice of chicken or pork.

The red chili pork is the tastier of two fillings if the tamales are served plain, as they come at lunch. But at dinner, either choice is good with the restaurant’s chili con carne over the top. 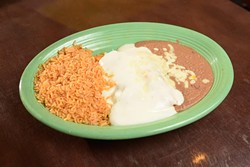 Sour cream chicken enchiladas ($9.20 lunch, $11.85 dinner) only seem simple when they’re done correctly, as they are at Tarahumara’s. The chicken is moist. The corn tortilla wrapped around it is soft enough to be cut with the side of a fork, yet strong enough to make the trip from the scorching plate (the server isn’t kidding about it being hot) to your mouth without falling apart. Best of all, the sour cream sauce stays together. There’s nothing quite so disappointing as a fairly straightforward sauce that comes to the table broken (i.e. the fat has separated from the rest of the sauce).

It’s a matter of attention to detail, which this Mexican eatery has down pat. Servers and cooks who are focused on the customer won’t let a dish leave the kitchen looking sub-par. Tarahumara’s is full of veteran employees who care about every step of the process.

Another example: Watch servers bus tables. NASCAR pit crews should come in to take notes on how quickly and efficiently each table is cleared, cleaned and set for the next group of customers.

Watch them before the food comes, though, because it’ll be nearly impossible to take your eyes off the plate as your server delivers a sizzling skillet of costillas a la parrilla Tarahumara ($13.75).

Similar to fajitas, this dish of grilled pork ribs comes with sliced onion and bell pepper slowly melting on a cast iron plate. But instead of strips of steak or chicken, diners are greeted with ultra-tender meat in a spicy sauce.

Check out the balancing act the cooks mastered with these ribs. Pick one up and it holds together, but apply any pressure from teeth or a fork and the meat falls right off the bone. It’s the perfect compromise for those who can’t decide between Mexican food and barbecue.

Though it doesn’t come with all the flash and sizzle of costillas, there’s something quite striking about a plate of chile Colorado ($9.75 lunch, $13.95 dinner). Maybe it’s that bold red hue that gives the sauce a signature flair. Or maybe it’s the way people began gulping water and pouring frozen margaritas in their mouths after a couple of bites.

The point is it’s hot. The sauce is either red because it’s made of slowly braised spicy red peppers or because it’s made of lava that hasn’t had a chance to cool. Either way, the stew is delicious. Chunks of pork and potato soak up the sauce so each bite is a burst of fiery flavor. 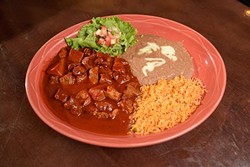 Chile Colorado is reason enough to get a frozen swirl (that’s frozen margarita and sangria swirled together), but so is wanting a delightful beverage to start off a fun night out.

Tarahumara’s is a perfect spot for a lively gathering of friends since there’s plenty of seating inside and out and the noise level is right on for people who like to get a little loud. And there’s a nice selection of Mexican beers served in big, frosted glass goblets for those seeking lower-point drinks.

Whatever you eat (or drink), save some room for a dessert of churros (three for $3.95). The cinnamon-and-sugar-coated fried treat has a crunchy texture that gives way to a creamy center. Strawberry syrup and whipped cream aren’t necessary, strictly speaking, but as long as one is indulging a sweet tooth, why not go all the way?

That go-all-the-way attitude is what makes Tarahumara’s such an enduring favorite among diners in Norman. The food is outstanding, and the precision service is a thing of beauty. And, seriously, order the mole.

What needs work: The busy dining room gets loud.