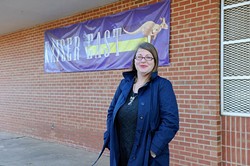 On the advice of teacher friends, Stephanie Jensen traded a career in higher education for a substitute teacher position with Oklahoma City Public Schools last year.

With a master’s degree in education, Jensen pictured herself in the classroom, introducing students to poetry, discussing literature and reviewing writing assignments. While trained as an educator, she lacked experience in lesson planning, assignment grading and even SmartBoard, the modern-day chalkboard.

There, Jensen was treated like a valuable member of the school’s team, not like a visitor filling in for an absent teacher. Her colleagues offered guidance and passed along tips. Best of all, Jensen’s original intention for teaching was proven true: She was making a difference daily.

“I felt I could make an impact,” Jensen said. “The students at Roosevelt showed me I was making an impact. They would tell me, straight up. I thought, ‘I’m just a sub,’ but the principal told me to stop referring to myself as just a sub. I was a teacher.”

This summer, she earned her emergency teaching certificate through the Oklahoma State Department of Education. In August, she welcomed fifth-graders to her classroom at Kaiser Elementary School, a prekindergarten through sixth-grade building located in a northwest Oklahoma City neighborhood. In late December, Jensen was eager for school to resume and to pursue the remaining exams required by the state for gaining her teaching license. She passed her first exam, the Oklahoma General Education Test.

Fellow Kaiser teachers and teacher friends — those who initially suggested she substitute — now support her quest to become a classroom teacher.

“The personal side of teaching, like the discipline and connecting with the kids, that’s what comes naturally to me,” she said. “[Teaching] is something I can do, but I am going to need support and professional development.”

Jensen’s teaching path could become more common if lawmakers approve one of the recommendations made by the Teacher Shortage Task Force in the next legislative session.

The task force recently made nine recommendations aimed at alleviating statewide teacher shortages and presented them to the State Board of Education during the December meeting. The suggestions address certification barriers, recruitment and incentives.

The task force also called for promoting the teaching profession as an appreciated career path.

Since July 1, the seven-member board, which includes State Superintendent Joy Hofmeister, has approved 977 emergency teaching certificates as part of its effort to reduce teacher shortages.

Those with an interest in education and a bachelor’s degree can apply for an emergency certificate that grants one year of teaching in a public school classroom.

Of the nine recommendations, one proposal would create a recruitment program to support undergraduate students, midcareer professionals and military personnel interested in pursuing teaching. Recruits receive specific guidance and opportunities to transition into classrooms.

The task force recommendations don’t provide specifics, but perhaps the guidance provided to Jensen and others is an appropriate model that OKCPS has anticipated and enacted already. The district’s new support program provides targeted professional development workshops to emergency certified teachers throughout the school year.

The teacher shortage, low teacher pay, dwindling school dollars and declining student performance scores are key issues for the State Board of Education.

This year will prove challenging for any refined or new policies that come with price tags.

However, it has also become clear that status quo policies are too costly to maintain.

After months of low tax revenue collections, state leaders in the Office of Management and Enterprise Services handed down a 3 percent cut to all state agencies, which began Jan. 1. For the state department of education, that translates to a $46.7 million funding loss through June 30.

The next fiscal year doesn’t appear any brighter, as state leaders predict a budget shortfall around $900.8 million.

When the Teacher Shortage Task Force was formed in September, talks of budget woes for fiscal year 2016-17 were just beginning. The 111-member group includes legislators, business leaders, teachers, education advocates and representatives from the education agency. Tasked with examining the causes behind the state’s teacher shortage, its members were instructed to recommend strategies to curb the shortage and avoid suggestions requiring additional funding.

Their nine recommendations appear in the task force’s preliminary report, issued less than four months after the group’s formation.

A final report is expected later this year.

The report acknowledges that a lack of competitive teacher pay contributes to the state’s teacher shortage.

Oklahoma ranks No. 49 in a state-by-state comparison of teacher salaries, with an average salary listed at $44,373, according to a recent report issued by the National Education Association.

“We can’t forget the need to be competitive,” Hofmeister said during the Dec. 17 board meeting. “We continue to lose folks to other industries and to other states. As we face tremendous challenges economically, there has to be a long-term plan on how we solve this and gain regional competitiveness.”

Last January, Hofmeister introduced a five-year plan to raise teacher pay to the regional average. Called #OKhigh5, the plan would cost $150 million in its first year of implementation and provide $2,000 pay raises and two additional days of instruction.

The proposal requires legislative action and the governor’s signature. #OKhigh5 is unlikely to gain traction during what Gov. Mary Fallin has called “a very challenging budget year.”

It’s first-year teaching experiences like Jensen’s that illustrate the potential impact of many of the Teacher Shortage Task Force recommendations. Jensen admitted that being a new teacher is challenging, but with so much support, she will stick with it.

“To have teachers, administrators and the district support me means everything to me,” Jensen said. “I get to focus on the classroom and my students. I have zero hesitation with going forward with my alternative education certification.”

The Teacher Shortage Task Force’s nine recommendations to alleviate the state’s teacher shortage were delivered to House and Senate leaders in late December. The Oklahoma Legislature reconvenes Feb. 1. The recommendations are:

1. Retired teachers as mentors: As the number of new teachers grows each school year, there is a need for veteran educators to mentor first-year teachers. Finding mentors is challenging for many school districts, as state law requires they be full-time employees. The task force called for amending the statue to allow retired teachers, who are not employed by the district, to serve as mentors.

2. Scholarships for certification exams: The Oklahoma State Department of Education requires passage of at least three exams before teacher certification can be granted. It costs around $500 to pursue certain teaching certificates. The task force said exam costs can be “burdensome” and recommended creating a scholarship program with oversight from and rules of eligibility determined by the Office of Education Quality and Accountability.

4. Pathway to certification through approved work experience: Under current law, alternative teacher certificate candidates must have at least a 2.5 or higher cumulative college grade-point average. As the Oklahoma State Department of Education encourages midcareer professionals to consider alternative teaching certificates, the task force called for certain work experience to substitute for the grade-point-average requirement.

5. Expanding opportunities for adjunct teachers: School districts can hire adjunct teachers, or individuals from the business or arts community with bachelor’s degrees, to teach courses. Current statutes limit adjunct educators to 90 teaching hours per semester, or about one hour per school day during a semester. The task force wants to increase the limit to 270 hours per semester, allowing adjuncts to teach three hours per school day during the semester.

7. Teacher recruitment program: Undergraduate students, midcareer professionals, military professionals and high school students would be recruited for teaching positions through a specific program. Candidates would be connected to teaching assistance programs, scholarship opportunities and loan forgiveness programs. A recruitment program would require funding, and the business community could provide matching funds, as suggested by the task force.