Taste of Korea takes no shortcuts while preparing family recipes 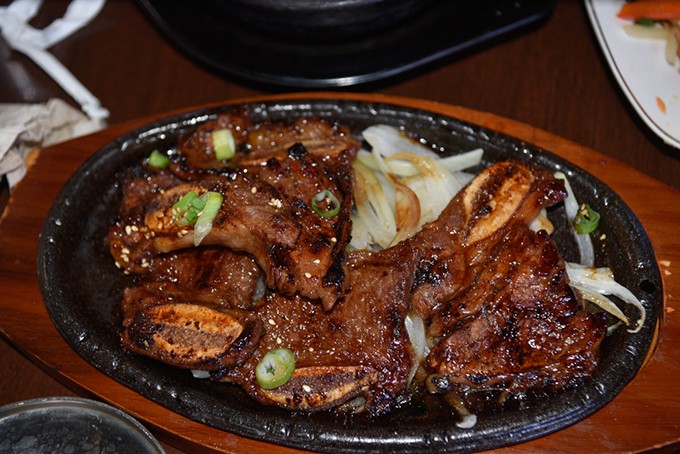 Tom Tubtim whirled his chopstick into his bowl for another bite of stew mixed with rice and leaned back in his chair surrounded by his wife, daughter and young grandchild with a sense of contentment.

Tubtim lives in Elgin, grew up in Hawaii and served on a U.S. Army base in South Korea from 1996 to 1997. When he comes to visit his daughter in Edmond, it often includes a family outing to Taste of Korea, 5 S. Western Ave.

“It’s the best Korean food I’ve had since leaving,” Tubtim said. “[Owner Sun Ha] has a few things I haven’t been able to find anywhere else.”

Even in the mid-afternoon when traffic to the restaurant should slow between peak lunch and dinner rush, Taste of Korea is busy. It is a testament to the business Ha has generated since she opened the restaurant 10 months ago in the space formerly occupied by Amy’s Noodle House.

“It’s been very busy,” Ha said in Korean through an interpreter. “I’m so thankful to the people that support us in this humble place. I want to return that appreciation by making healthy, quality food.”

Ha moved to Oklahoma City from Nashville about six years ago at the behest of a relative who was already in the area. She got her start cooking professionally in Nashville but is relying on her grandmother’s recipes and influence to create a menu that she hopes showcases Korean cuisine.

“Korean food is not as renowned as Chinese or Japanese sushi,” she said. “I want to let people know how excellent Korean food is. I don’t want to make any tweaks that make the food Americanized. I want to show the Korean cuisine as it is in Korea. To do that in Oklahoma can be tricky because it is hard to get the ingredients at a good price. I stubbornly want to preserve the authenticity.”

Taste of Korea’s prices are slightly higher than Seoul Garden, but Ha said it’s because she takes no shortcuts in the recipes. She even makes her own soy sauce from raw beans, which is a monthslong process when factoring in fermentation.

Kimchi, spicy fermented cabbage, might be the most visible Korean dish in United States culture is one of many side dishes served with each meal, which are called banchan. In the winter, they serve fermented radish; in the summer, it is fermented cucumber. The other dishes change depending on the season.

“The salt used for kimchi should be the highest quality. Some people want to price it down by using cheap salt,” Ha said.

Fermented food like kimchi is high in probiotics, and it is a staple of Korean dishes, eaten multiple times a day. Perhaps it is no coincidence that South Korea has one of the lowest obesity rates in the world (5.3 percent), second only to Japan among 35 member nations of the Organization for Economic Cooperation and Development. The United States’ obesity rate is 38.2 percent.

Ha cooks because she feels a connection to her ancestors by staying committed to recipes developed over centuries. Her favorite dish growing up was her grandmother’s dolsot bibimbap, which is one of the most popular dishes at Taste of Korea. Grilled meat is served with carrots, squash, bean sprouts, spinach, mushrooms and an egg over rice. Pour some gochujang hot sauce and stir it all together.

“When I was young, my grandmother would cook bibimbap for me,” she said. “I liked it to have more meat and barbecue, but later, as I learned food more, I realized that this is a very nutritious and balanced food. It’s harmonized with different flavors of vegetables. It’s the perfect food in terms of nutrition and flavor.”

Stews are an important part of Korean cuisine, and Taste of Korea has jjigae with broth seasoned by the bright red gochujang; ugeoji galbitang, a short rib soup with dried cabbage; guk, a clear dumpling soup; and jjamppong, a spicy seafood and noodle soup.

“We make all of our broths overnight and do no use flavor enhancers (like MSG),” Ha said. “It’s not authentic unless the soup is served boiling hot. Everything is served to be shared.”

The sign for Taste of Korea at the corner of W. Sheridan and S. Western avenues says it is a drive-thru, which is a remnant of its former occupant. Ha said they tried to serve the drive-thru window when Taste of Korea first opened, but it became untenable between cook time and demand in the restaurant.

“In 10 months, it’s been busy and we’ve experienced a lot of trials,” Ha said. “It’s been busier than we expected it to be. At first, we got some complaints that the service was slow because we had to figure out a lot of stuff in the beginning. We had to make improvement in the kitchen equipment. Now it’s a lot faster.”

Ha said she wanted to start in a space that was small enough to get her footing since it is her first restaurant. She is open to the idea of expansion for Taste of Korea in the future.