However different the populations of Oklahoma City might be, they all have to eat, said Jill McCartney, Northwest Oklahoma City Chamber president and CEO.

“Restaurants are kind of a universal calling card,” she said. “Not everyone shops for the same kinds of products, but everyone eats.”

A new restaurant brings excitement and energy to a neighborhood, she said. They draw in people from outside the area and give exposure to pre-existing businesses.

As much work as restaurants do for their neighbors, McCartney said they need help too. That’s the focus of the eighth annual Taste of Northwest Auction & Food Fest 6:30-9 p.m. Sept. 22 at Oklahoma History Center, 800 Nazih Zuhdi Drive.

It’s the chamber’s signature event and features bites from 16 local restaurants and live and silent auctions to raise money for the organization’s community-building and leadership-development programs.

The theme for this year’s Taste is Oh The Places You’ll Go! celebrating the whimsical world of Dr. Seuss.

“We’ve embraced this year’s theme, Oh The Places You’ll Go!, by inviting event guests to ‘go’ from restaurant to restaurant, sampling delicious foods and bidding on a great lineup of auction items,” she said.

McCartney said everyone at the chamber is excited for the event, especially given the theme.

“The initial idea was that people will go exploring around the city, eating at different places and finding new restaurants,” she said. “But then our imaginations took flight. All the images, the silliness and the fun that Dr. Seuss brings will fit well with our event.”

Her hope is that participating restaurants go as wild as the Cat in the Hat with their culinary contributions.

“If nobody does green eggs and ham, I’ll be a little disappointed,” she said. “Then again, if everyone does it, that would be weird.”

It’s always exciting to welcome back previous participants, including the winner voted by last year’s guests, V2 at Vast.

“V2 will be back to defend their title, but Interurban is coming, and they’ve won it before,” she said. “1492 is doing it this year, which is exciting. Everybody knows about their Midtown location, but not about their new restaurant in Casady Square.”

Deep Fork Restaurant Group came in strong this year, with four restaurants competing. McCartney said it feels good when people want to be a part of what you’re doing.

“We’re raising funds for our programs, but it’s also our chance to shine the light on these northwest Oklahoma City restaurants,” she said. “These are locally owned small businesses that have a variety of different flavors and different elements that reflect the many parts of our community.”

“It’s a new Asian restaurant that just opened in the end of July,” McCartney said. “One thing that’s really neat is that it’s in a space that has been recycled.”

Ding, 6400 NW 39th Expressway, in Bethany took over a space that had been a revolving door for many restaurants over the years. The new owners, who also own Szechuan Bistro, 1010 W. Memorial Road, bought the building and renovated it inside and out to create an upscale, competitive restaurant.

“A great new restaurant really becomes a hub or a magnet for new businesses,” McCartney said. 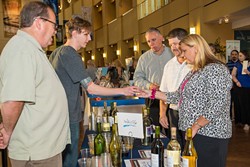 McCartney said the chamber is expecting more than 300 people to attend this year’s event. Taste is taking place once again at Oklahoma History Center, which McCartney said gives the entire night an added sheen.

“The history center is just a beautiful venue with so much variety,” she said. “It’s a great open space, especially for all of the auction items.”

As guests go from table to table, they will also be able to bid on silent auction items provided by chamber members.

“The auction is going digital this year,” McCartney said. “People will be able to bid with their smartphones, so they won’t have to stalk the auction tables and keep an eye on an item. Plus it makes checking in and out go more easily.”

Tickets for Taste of Northwest Auction & Food Fest are $65 at nwokc.com and must be purchased in advance.