The inspiration for Taste of Soul, which began in 2011 as a food truck selling egg rolls in the Oklahoma City area and opened a restaurant with an expanded menu Aug. 1, originally came from co-owner Ricki Bly’s dislike of the staple Chinese restaurant appetizer.

“I never liked egg rolls,” Bly said. “They had, like, gray meat inside of them, and I was just like, ‘What is that?’”

Bly’s wife and business partner, Cerese Bly — who recalled fond childhood memories of eating at local Chinese restaurants with her family, a tradition the Blys continue with their children — said she took her husband’s disdain for the food as a challenge.

“I just said ‘Hey, I’m gonna make an egg roll that you love,’” she said. “Long story short, I got in the kitchen, threw some stuff together and he loved it.”

He loved the egg roll she made him so much, in fact, that the Blys began to build a small business around it.

“It was so good to me, I was like, ‘I think I can sell it,’” Ricki recalled. “So I gave some away at my job, and the next day, they were like, ‘Where are the egg rolls?’ I was like ‘Y’all liked them?’ and they were like, ‘We’ll pay you for them.’ So that’s how it all started, and then one thing led to another and a lot of people started paying for them.”

After the egg rolls proved a hit with coworkers at the furniture warehouse where Ricki Bly worked as a receiving manager, the Blys began selling the rolls at concession stands at basketball games and in gas stations and eventually even a Chinese restaurant added them to their menu. That was when they knew they had a hit and began looking for a way to sell their rolls themselves. 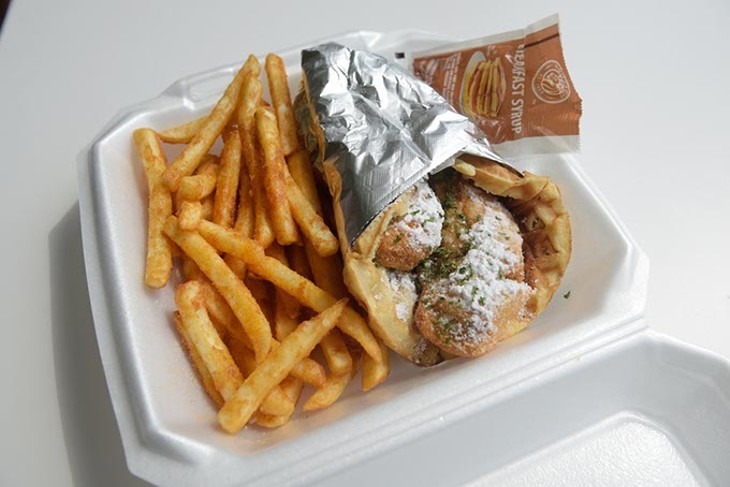 The answer came to them on a visit to Atlanta, where the Blys saw that food trucks were becoming trendy, but when they got back to Oklahoma City and opened the Taste of Soul Egg Roll truck, they were still among the first local options being offered.

“When we came out, mainstream food trucks weren’t super popular,” Cerese said. “There’s always been south side taco trucks, but as far as other food varieties, there weren’t very many out there when we got started. We were and still are the only egg roll truck here in the city.”

Unlike traditional egg rolls made with pork, the Blys’ signature recipe calls for ground turkey. The rolls were so popular, they were the only item offered on the food truck’s menu for the first four years, but Cerese said the reason for the original substitution was simple.

“I think that’s just what I had in the kitchen at the time, honestly,” she said, laughing.

The Blys eventually added chicken and veggie options to their food truck menu and began running a second food truck specializing in chicken and waffles. Taste of Soul Egg Roll was a runner up for “Best food truck” in Oklahoma Gazette’s Best of OKC 2016 issue and a finalist for “Best soul food” and “Best food truck” this year. The newly opened restaurant, which the Blys said patrons have been requesting for years, combines the menus of both food trucks with added items including grilled tilapia, cheeseburgers and salad options.

“It was just time for us to give the customers what they’d been asking for,” Cerese said. “They let us know they’d get it more if they knew exactly where to get it. … We had two separate food carts, and they weren’t usually ever in the same spots except for big events, but now … we’re going through a rebranding process where we’re bringing both the egg rolls and the chicken and waffles under one roof.”

Other unconventional egg roll choices on the menu include breakfast egg rolls stuffed with hash browns, cheese and bacon or sausage and “Tastees” stuffed with apple or cherry filling and topped with powdered sugar. Soul Rice, offered as a side item, is chicken fried rice with scrambled egg.

“Asian fusion is all the rage now,” Cerese said, “and I think that’s why people love our egg rolls — because they’re Asian with a twist. Obviously, we’re not Asian.”

“You can’t cheat people on food; they know good quality,” he said. “We hand-roll all of the egg rolls and hand-bread all of the chicken.”

The restaurant, located on the first floor of the White Star Petroleum building, 301 NW 63rd St., Suite 150, is open 8 a.m. to 3 p.m. Monday-Friday and serves breakfast items until 10:30 a.m. Patrons should park on the north side of the building to access the first-floor entrance. Though Cerese said they’ve “slowed down [their] scheduling until [they] can get the reins on this restaurant,” both the Taste of Soul Egg Roll and Taste of Soul Chicken and Waffle trucks remain open for business at various locations in Oklahoma City and are still available for event catering and private parties. Customers can still track the food trucks’ schedules on their individual Facebook pages.

“We’re just extremely grateful to the city for allowing us to be around this long and thankful that they’ve supported us to this point,” Cerese said.

They’ve recently opened their first brick-and-mortar location and expanded their menu, but the Blys still have new ideas for the future of Taste of Soul. They’re already considering opening a second location and researching ways to ship orders for long-distance delivery.

Print headline: Solid Soul, Taste of Soul further cements its place in the metro with a brick-and-mortar restaurant.