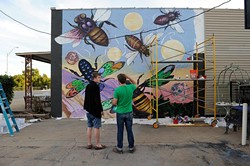 With a ladder and a dozen cans of spray paint, artist Dusty Gilpin went to work on the side of a beige building in an alleyway along Western Avenue in early November.

The wind lightly blew, and the afternoon sun peaked between the Rug & Carpet of Oklahoma and Ketch Design Centre buildings as Gilpin completed his first parallelogram-shaped space depicting a wilderness scene. He moved on to the next parallelogram and guided the paint spray as he created another scene of trees.

“Would you have ever looked at this wall before?” asked Gilpin as he stood back to study his progress.

That’s exactly what Gilpin was going for.

Created with fellow artists Kris Kanaly and Jerrod Smith, the mural titled “The Nature of Things” divided the two-story wall, much like a checkerboard, into various parallelogram shapes.

Each artist was tasked with painting about six of the shapes along the building at 4408 N. Western Ave.

“The Nature of Things” is one of three murals being honored at Tuesday’s Taste of Western, an event dedicated to celebrating culinary arts in the Western Avenue District. Last year, the district’s association incorporated the “distinct flavor of local art” by recruiting nine artists to create five murals, turning the district into an outdoor art gallery.

Rachael Taylor, executive director of the district, said the association sought to expand the art ingredient, selecting eight artists to create three murals to tie into this year’s event.

“It was our hope that everyone would collaborate to create a mural,” Taylor said.

The association’s art committee paired artists based on style and mediums.

“We left it up to them to create whatever design they wanted,” she said.

After mock-ups were created, the association presented the mural designs to the property owners, who gave feedback. The final designs were approved through Oklahoma City Arts Commission. 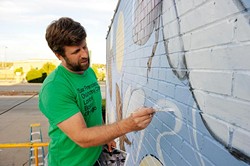 Henderson, a mural artist for more than a decade, described public art projects as growing in Oklahoma City, thanks to ongoing efforts by arts organizations and the Western Avenue District.

“It is really something special for the city, and I am glad that it is being pursued,” Henderson said.

The third mural is along the south side of a shopping center at 7200 N. Western Ave. Artists Nick Bayer, James Clark and Sam Douglas created “Wilderness on Western.”

Technology company Google is sponsoring the new murals and plans to announce a unique partnership at Taste of Western. Additionally, Midtown Rotary Club will highlight the 2014 mural artists, presenting checks to the artists.

District leaders believed the murals would energize and further distinguish the unique northern Oklahoma City district, which is home to retail, restaurants, service shops and churches.

“People feel ownership of these murals because they watched them happen,” explained Taylor. “They were present for their creation. … It is a little piece of their neighborhood.”

A quick stroll down increasingly walkable Western Avenue yields a bounty of delectable dishes of every sort, which has helped make the annual Taste of Western a must for food and wine lovers.

Now in its 13th year, this gathering has grown from a small cluster of restaurants to a roster featuring a revitalized VZD’s Restaurant & Bar, Iron Star Urban Barbeque, Bin 73 Wine Bar, The Wedge Pizzeria and The Coach House.

“It’s always exciting for the district to come together and to see what the restaurants have in store for us,” she said.

Taste is the district’s biggest fundraiser of the year and allows Western to provide events like On the Lawn and WestFest for free.

“It also gives us the funds to do marketing and beautification for businesses and our public spaces,” Taylor said.

One participating restaurant is West, 6714 N. Western Ave., which has been a part of Taste for five years.

“We actually start planning our menu for the night in July,” said Kortney Haynes, communications director for the restaurant group. “We try to come up with something that the crowd will love and showcase new menu items.”

Taylor said restaurants choose their own small bites, both savory and sweet, to serve.

“It’s not always what’s on the menu,” she said. “The event lets them stretch their culinary legs and try something fun and different.”

Taste also returns to the historic Will Rogers Theatre this year, so those who want a cocktail can nip out to The Lobby Cafe & Bar for something stronger.

General admission tickets are $55, and VIP tickets are available for $75. VIP tickets include access to a pre-party at 5 p.m. in The Tasting Room with hors d’oeuvres, full pours of wine, two raffle tickets and a crystal wine glass. Learn more at tasteofwestern.com.

Print Headline: Fresh-air flavor, Murals are the special ingredient that makes Taste of Western the toast of the town.