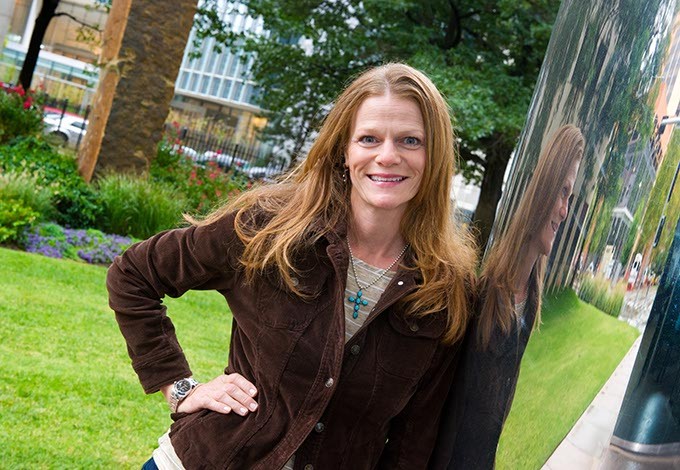 After 28 years away from home, Tava Sofsky is back in the Sooner State and has joined the Oklahoma Film & Music Office as director.

Sofsky grew up in Ada and graduated from the University of Oklahoma. In her junior year, she realized that she wanted to get into the entertainment industry.

“I wasn’t sure exactly what I wanted to do, but this burning desire was there,” she said. “It was like a fire that was lit underneath me.”

After graduating, she knew that her professional life would lead her to either New York or Los Angeles.

“I chose L.A. and started at ground zero,” she said.

In L.A., Sofsky gained commercial film and music experience, starting out as a production assistant. She did projects with producer Doug Claybourne, a fellow Oklahoman.

“I love all the aspects of filmmaking, which is why I chose producing,” Sofsky said. “You get a big picture of the whole industry in this line of work.”

Sofsky got married and started a family in L.A. (Her husband is also a filmmaker.) After traveling across the country for different projects — including restoring an old movie theater in Florida — she and her husband decided that they could afford to make a change.

“We realized that we didn’t have to be in L.A.,” she said. “We were always either on location or traveling, so we moved back to Oklahoma.”

When Jill Simpson, the former director of the Film & Music Office, approached Sofsky about taking her place as director, she was thrilled and humbled.

“It was a blessing that she thought of me,” Sofsky said. “[Simpson] transformed the face of the film industry in Oklahoma. And we share similar backgrounds — we both worked for the same producer, Doug [Claybourne].”

Sofsky credits her courage to pursue her love for film to her parents, who encouraged her from an early age to follow her passions.

“My upbringing was that you can do anything,” she said. “The sky’s the limit.”

Her parents also instilled in her a strong work ethic that she held onto throughout her travels.

“My parents taught me to be a hard worker, that you don’t deserve a handout. You have to work for it,” Sofsky said. “I tried to carry that through and stay true to who I was while I was out in L.A.”

Given her experience in L.A. and her Midwest heritage, Sofsky said that she can relate to both the filmmakers and crew in Oklahoma as well as to the out-of-state crowd. Her focus now is to build relationships with outside filmmakers and bring them here.

“We want to craft an image so that quality projects come to mind when you think of Oklahoma film,” she said.

Sofsky said that festivals like deadCENTER help put Oklahoma film on the map in a positive way.

“It helps show Oklahoma in a new light, sort of rebranding our image to the industry,” she said.

Sofsky’s plans for the Oklahoma Film & Music Office include hosting more cineposiums — events that bring filmmakers and other prominent players in the industry together in a roundtable-style workshop to discuss aspects of filmmaking.

“We want to provide more opportunities for people to learn about specific areas of filmmaking that they’re interested in,” Sofsky said, “whether it’s production management, distribution or costume design.”

Sofsky said that she wants to educate aspiring Oklahoma filmmakers about the tools they have at their disposal, such as the rebate program, which offers eligible companies up to a 37 percent rebate on their Oklahoma expenditures.

“Our goal is to grow and promote our talent so that they are equipped to work on any project here,” she said. “Part of that is dependent on educating people about their available resources.”

Today, Oklahoma’s film and music industry is growing rapidly, and Sofsky thanks the state’s rich cultural history and devoted citizens for that.

“We have such a great heritage,” she said. “And we’ve got the talent.”

In other words, you’re doin’ fine, Oklahoma. Time to make some movies.