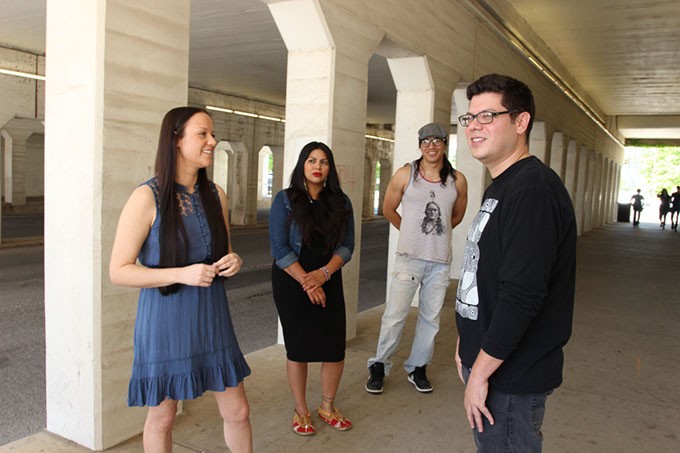 Staci Sanger, Downtown Oklahoma City Inc. marketing manager, said she and her colleagues were not exactly thrilled to hear price quotes between $10,000 and $20,000 just to paint Bricktown railroad underpasses a stodgy mixture of gray and beige.

They knew there were better ways to brighten the area and instead decided to bring a public mural project to the E. Sheridan Avenue underpass near Chesapeake Energy Arena and N. E.K. Gaylord Boulevard.

Downtown OKC, in conjunction with the Chickasaw Nation, selected two pairs of Native American artists to bring their artistic visions into the spaces.

The project, which began last week, is scheduled for a June 1 completion.

A similar mural project by artist Jason Pawley, “Cultivation,” was completed in 2015 on the W. Reno Avenue underpass.

For about the same cost of painting those walls uninteresting, neutral colors, Sanger said Downtown OKC was able to recruit artists to transform the spaces into vibrant passages to and from Bricktown.

“We’re passionate about that because it’s a creative way to make our city more beautiful and it actually doesn’t cost any more,” she said, “which is a common misconception among the majority of property owners.”

Steven Grounds, one of four artists participating in the project, has long envisioned putting up Native American portraiture in one of the most trafficked areas in OKC. He researched other Native mural projects in the state.

There are not many.

“I thought it was really important from the standpoint of painting something of heritage and culture in Oklahoma that would represent the people that live here,” he said. “It was more of an idea of community and a reflection of the people that live in the various different tribes.”

She knew of his dream to bring indigenous art to OKC’s public spaces and immediately contacted him about sending in a proposal.

Hatfield and Grounds are the first two artists selected for the Sheridan Avenue underpass project.

Their canvas is the southside wall of the Amtrak line underpass.

Their concept is a tribute to the strength and value of Native American women and is inspired by “See the Woman,” a poem by Native artist and activist John Trudell.

On one end, Hatfield will work from old photographs to paint portraits of historic Native women.

On the other, Grounds will use the photography of a friend to paint current-day Native women.

In the middle, the artists will collaborate on a portrait.

Grounds said it’s an experimental part of their project that is rarely, if ever, attempted on murals.

Chad Nish Earles (Caddo Nation of Oklahoma) and Rhiana Deck (Choctaw) might watch each other work every day, but the artist couple will do their first shared project together when they take on the northern wall of the Sheridan underpass.

“I’ll do my stuff; she’ll do her stuff,” Earles said. “We’re always right there, but we never really have done a big collaboration piece.”

Its red background is inspired by traditional Caddo pottery, which is made by hand from coiled clay.

In the foreground, a blue, feathered figure tells a story as motorists pass by.

Deck said as a Choctaw, she loves the stories that were handed down to her by older generations.

They helped inspire this work.

“A lot of those stories have giant figures or giant birds or animals,” she said. “The feathers kind of represent a resilience, and it kind of tells a little bit of a story down the wall. It’s real subtle, but it kind of starts in a birthed way and it goes to the very end.”

Earles said the mural references many things, including Native American creation myths and the ideas of emergence and preserving Mother Earth.

Ultimately, though, he hopes people take their own meaning from the work.

“We have our message, but it’s not necessarily what we’re trying to communicate,” he said. “There’s a lot of universal truths in the art that we’re doing.”

Both teams are taking their own approach to their ends of the underpass, and each artist adds a unique perspective to the project.

“I kind of see this whole thing as one big collaboration,” Deck said.

Grounds said he relishes the opportunity to create art in a public place and in front of an audience.

It allows him to do something for people who might have never stepped inside a gallery.

“It’s kind of weird, but you actually can feel the energy [of the people],” he said. “If you go to a rock concert or something, the band is feeding off the energy of the crowd. The music becomes more powerful when you’ve got a crowd and everyone’s got that synergy going on.”