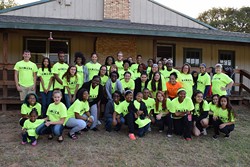 It’s time to hit the books as Teen emPower! sets the stage for its annual trivia night, with proceeds going toward education programs for metro teens as they transition from adolescence to adulthood.

Now entering its twelfth year, the event is 6 p.m. Aug. 27 at Chevy Bricktown Events Center, 429 E. California Ave. Teams are comprised of eight to 10 players who compete in 10 rounds made up of 10 questions each, totaling 100 questions. Question categories are expected to include music, movies, television, science, geography, politics, sports, history and sexuality.

The event follows the usual trivia night model: A question is read and teams work to answer the question, write it down and submit it to the emcee. The emcee then calls the answers, and final scores and winners are announced at the end of the night. Awards are given to the top three teams, with the gold place winner receiving a guaranteed table for next year.

Kathy Harms, Teen emPower! founder and executive director, said the idea for the trivia night began after she volunteered for an annual trivia event supported by the Special Olympics. After that initial spark, she recommended to her board that the organization host a similar event at a different time of year. Since then, Harms said the event has grown exponentially, expanding from 10 tables of eight players the first year to more than 50 tables with up to 10 people per team. She said the event has brought in approximately $15,000 each year since it began.

“We have needed very little marketing, as the event is filled by word of mouth. Some of the teams that participate are teams that played with us the very first year and have since,” Harms said. “People who attend tell others. People will volunteer and bring a team the following year. The trivia event has helped our program grow not only because of the money it brings in, but the human resources as well.”

Harms said over the past 12 years, the top team has changed nearly every year, with only one repeat. She added that questions are meant to ensure both trivia novices, veterans and even volunteers have an equally enjoyable experience.

“Some people ask how competitive teams get. I tell them some people are ‘here for the beer’ and others would trade their mamas off if they weren’t pulling their weight,” she joked.

Proceeds fund Teen emPower!’s many educational programs, including the Postponing Sexual Involvement program, which is taught to more than 800 students in four middle schools in the Oklahoma City metro area. Upon parental permission, students are taught evidence-based curriculum identified by the Centers of Disease Control as a prevention program effective in changing behaviors. Teen emPower! also works alongside organizations such as local churches and colleges.

“It terms of big fundraisers, that amount does not justify the time and energy spent invested in hosting the event,” Harms said. “However, it serves more than one purpose. It introduces our surprisingly not-well-known issue to new people, it helps with our small organization’s cash flow, it gives us an opportunity to visit with our supporters and it provides an evening of great fun to more than 500 people.”

Those wishing to participate in Teen emPower!’s 12th Annual Trivia Night must register by Tuesday at teenempower.org, by emailing kathyh@teenempower.org or by calling 405-503-7081. Tickets are $30 per player.