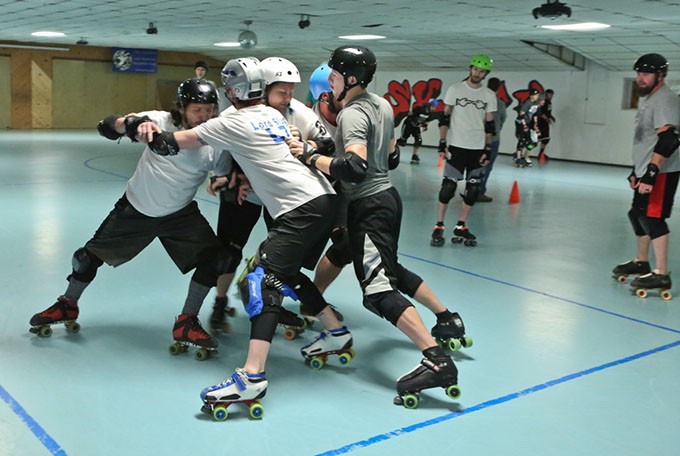 The two teams might be playing together for the first time, but team member and assistant coach Steven Halter said years of competition means the two sides were far from strangers.

“There’s a few new faces on both sides, but not many,” he said. “We just had to work to skate together instead of against each other.”

Roller derby is a contact sport played by two teams of five inside a roller rink. Teams earn points when their own designated skater — called a jammer — laps another team’s jammer. Other players attempt to stop the progress of the opposing jammer while clearing the way for their own. While the women’s game has become the most known version of the sport, men’s teams are common as well.

Do not think the match will be anything close to an easy victory for Oklahoma, despite Texas’ “B-Team” distinction. Texas Men’s Roller Derby is one of the top-ranked teams in the nation, and its B-Team is expected to include many players from its regular roster, which includes Team USA members.

Aaron Anderson, an original member of OKC Wolf Pack, said the former team began discussing a possible merger with Tulsa Derby Militia in January 2016, which coincided with the start of a new roller derby season.

“Both sides kind of decided it was better to wait at that point. It was kind of last-minute,” he said.

Anderson said the two teams met in several meetings near the end of last season to discuss the conditions of a potential merger. It was not an easy decision for either side. Both were proud of the time they spent building a team identity.

However, in the end, they found more advantages than disadvantages. A merger allows the teams to pull their collective resources into one pot, which is key for longevity in the MRDA. Combining the two sets of players also gives Oklahoma a stronger overall roster and forces skaters to compete for playing time.

“It pushes the competitiveness of it,” Anderson said.

Halter, who originally played for Tulsa, said both sides previously had a solid core of around five to six players who were very dedicated. Other players now have more incentive to become active now that those cores have united.

“It makes everyone else who’s kind of on the edge think, ‘Well, they’re taking strides and actually doing some things,’” Halter said.

A recent Sunday practice in Tuttle was Halter’s first official practice back on skates since breaking his leg in competition last year, ironically in a game against OKC.

Halter bears no ill will toward his Oklahoma City teammates, nor did the injury make him rethink his participation in the sport.

“It’s not if it’s going to happen; it’s always just been when,” he said. “It took six years for me to get hurt, and I’ve played in some pretty competitive derby over my years.”

Even after the merger, Oklahoma Men’s Roller Derby welcomes new members. Halter suggested those interested in trying the sport contact the team about a good time to attend a practice.

“Basically, you show up and we can hook you up with some pads and skates and see how you like it,” he said.