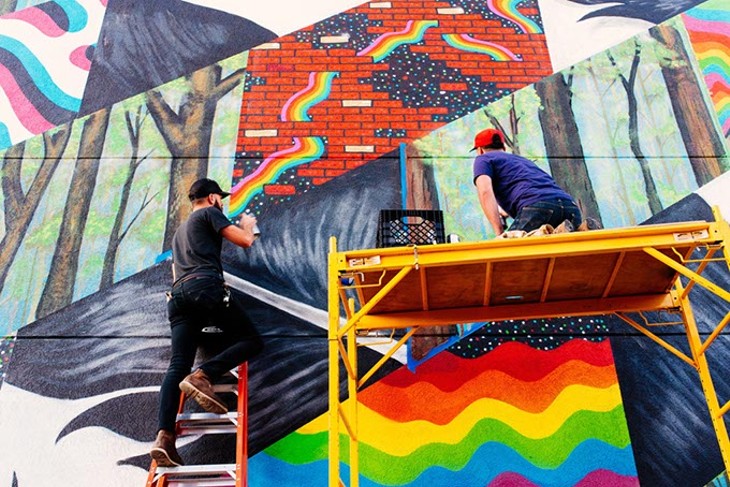 Jerrod Smith’s murals on Western Avenue can be seen from Tulsa, Tuscany and even outer space — with a secure Internet connection, that is.

Originally intended to bring excitement to the stretch of road between W. Wilshire Boulevard and NW 36th Street, Western Avenue Association’s mural project can now be seen by nearly anyone, anywhere through a partnership with Google Cultural Institute. Each of the eight Western Avenue murals, including the two Smith worked on, were added to Google’s digital art and culture archive.

“The world has become a very small place — a very large place but a very small place,” Smith, artist and owner of Weldon Jack, said. “That’s one of the benefits, that millions of people across the world can see what we did, and I think it’ll add to Oklahoma City becoming a destination and not just a place between [Los Angeles] and [New York City].”

Western Avenue Association, of which Smith is a board member, added five murals to its territory in 2014 to bring fresh interest into the area. The plan worked. Rachael Taylor, director of the association, said they constantly get tagged on Instagram in pictures of people posing with the art.

“The public really enjoys the murals, and that’s been one of my primary reasons for doing this, to really add public art to the city,” she said. “And it’s always really exciting to see people interact with the murals.”

Google took notice, too. Andrew Silvestri, public affairs manager for the state, said he has worked and lived in Oklahoma City for the last 10 years and has seen artists transform the city before his eyes.

After the five initial murals were finished, Google offered Western Avenue a $10,000 grant for the completion of three more murals. All of the art projects would then be photographed and added to their online Cultural Institute.

Silvestri said the institute is a nonprofit initiative seeking to partner technology with culture and art around the world.

“Museums and artists are creating actual archives all over the world, and this really gives them a platform to digitize those items and memorialize them forever, for generations to come, which is really exciting,” he said.

Smith said at first, the Western Avenue board was in favor of splitting up the Google grant money among different wants and needs, but he convinced his colleagues to invest the full amount in the artists for whom the money was intended.

By properly investing in the artists bringing their value into the area, Smith said everyone in the community truly benefits. If Oklahoma City wants to continue to see its profile grow, he said that type of investment will need to continue.

“The reality is Google sought us, and I think because of that, we can help be good influences or inspiration for another generation of people,” he said. “And we can use it for business. That’s Google saying, ‘Hey, this was great. This was something special.’”